Many destructive diseases can affect cannabis. Here’s how to recognize them. 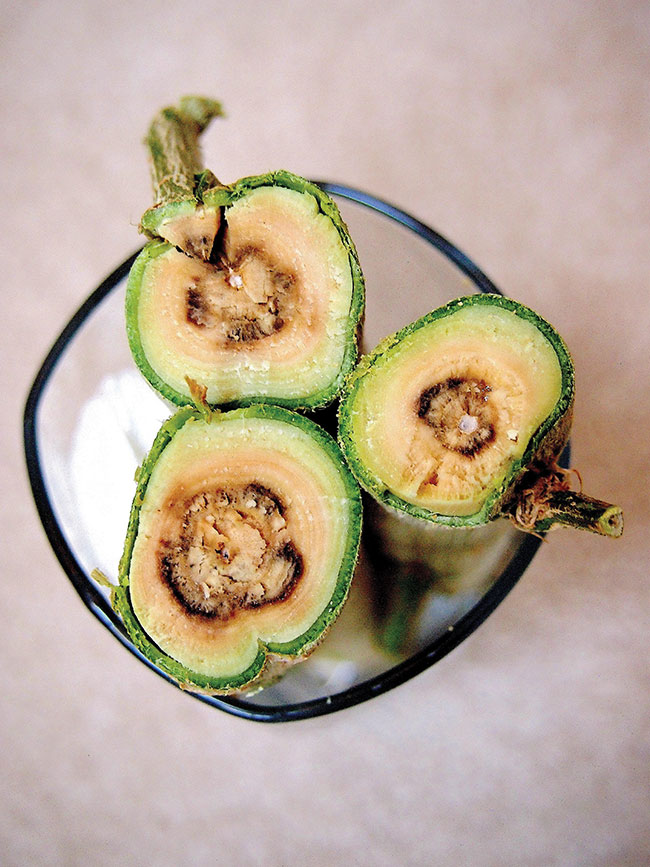 Similar to other greenhouse crops, cannabis plants are also susceptible to various diseases including Fusarium. Internal infection can appear as discoloured stem tissue when cut open. All photos by Z.K Punja

The production of cannabis in greenhouses is faced with challenges from various diseases, many of which are similar to those already found on other horticultural crops, such as tomatoes, cucumbers and peppers.

Fusarium and Pythium species cause root and crown rots which result in wilting and, in some instances, death of the plants. Powdery mildew is common on cannabis plants and develops rapidly under suitable environmental conditions. Destructive diseases which affect the flower clusters (buds) are caused by Botrytis cinerea and Fusarium species. Molds that develop after harvest can reduce quality and product acceptance. Last but not least, the recent detection of viroids and viruses affecting cannabis will present challenges for producers going forward.

Disease management requires identification using diagnostic methods in addition to assessing how they were introduced and spread within the facility. By implementing strict sanitary procedures and establishing a disease management program that meets the regulatory guidelines established for this crop, producers can reduce losses. Different strains of cannabis from different genetic backgrounds (genotypes) vary significantly in response to pathogen infection and further research is needed to characterize them.

Root infection, caused by species of Fusarium and Pythium, initially appears as a browning of roots, followed by loss of root hairs, giving rise to a poorly developed root system. Symptoms may appear as early as during the rooting stage of cuttings in propagation.

Pathogen sources may be from contaminated growing media or containers, recirculated water, irrigation lines, or from workers handling plants. One important source of Fusarium is mother (stock) plants [1a], which may harbour internal infection seen as a discolouration of the stem tissues when cut open [1b,c,d]. There may be no external symptoms on these plants 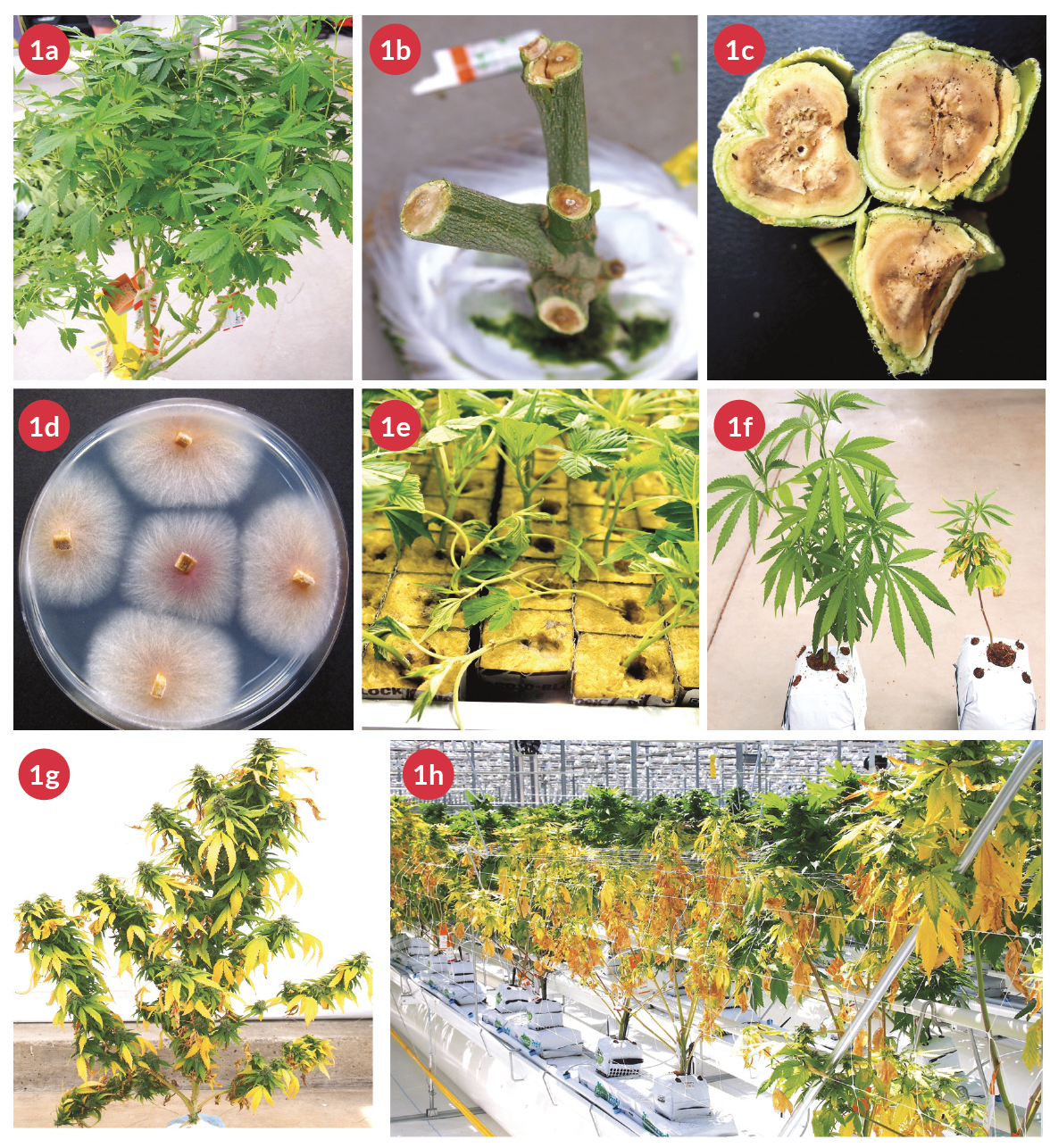 Figure 1: Symptoms of Fusarium infection on cannabis include internal stem discolouration on stock (mother) plants [a,b,c] from which the pathogen can be isolated [d]. Infection can result in damping-off [e], stunting [f], yellowing [g] and plant death [h].

Pythium causes more damage at the vegetative growth stage, with crown and rot root that can cause early plant death [2a-f]. More advanced infection on flowering plants can lead to rapid plant wilting and death, especially during periods of high temperature, due to extensive rotting of roots [2g]. Symptoms of infection include yellowing and plant death [2h]. 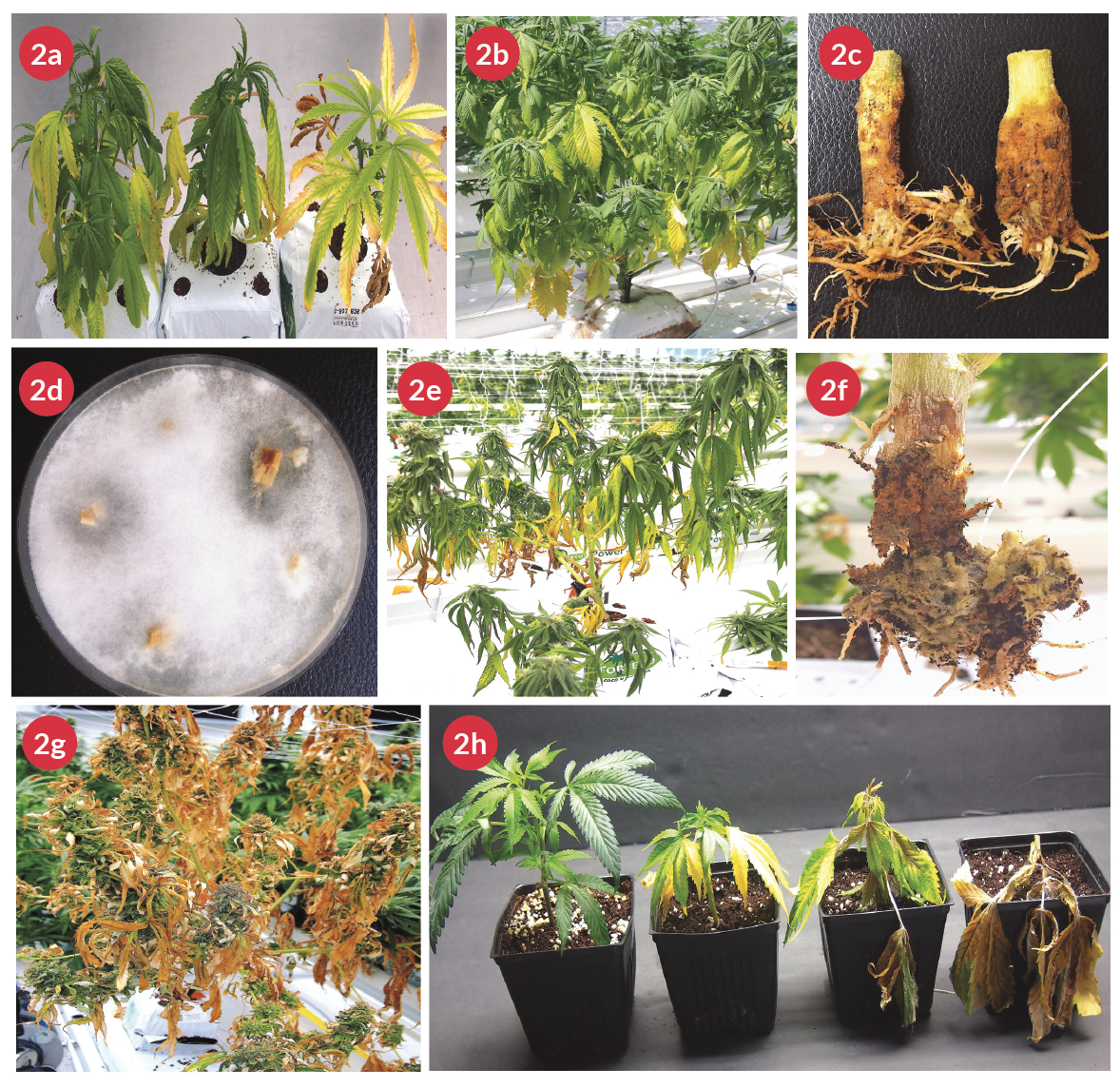 Management Options: It is important to confirm that a causal agent, such as Fusarium or Pythium, is associated with the symptoms seen on cannabis plants, as this allows one to rule out problems associated with fertility, water quality and other factors that can reduce root development and growth and cause similar symptoms.

If rooted cuttings are outsourced from a supplier, they should be quarantined for at least one week to assess for symptom development or tested for pathogen presence before being used. This outsourcing has been a major cause of pathogen spread in many growing regions in Canada. The sources of growing media, water quality, and other avenues for contamination should also be explored.

Sanitation is an important aspect of disease management, so all areas and equipment used in propagation should be cleaned with approved products and regularly inspected.

Biological control products currently approved for use in cannabis production can provide protection from root pathogens. They should be applied early during the rooting stage and again during vegetative growth. Microbial products, based on formulations of Trichoderma, Gliocladium and Bacillus species, provide protection but will not control diseases which have already become established. Producers can evaluate which products are best suited for their production method. The extent to which these beneficial microbes become established on cannabis plants and how they reduce disease development still needs further research. Do different strains of cannabis resist infection by Fusarium or Pythium species? We don’t have a definitive answer yet.

Symptoms of powdery mildew infection are easy to identify as white patches of growth on the surfaces of leaves or bracts [3a].

The powdery mildew fungus (Golovinomyces species) develops inside epidermal cells of affected tissues and reproduces on the surface of the diseased tissues, producing large numbers of spores [3b] that can be transported by air, workers or on cuttings taken from infected stock plants. Powdery mildew infection is favoured by humid, warm conditions (>70% relative humidity and temperatures of 24-30°C).

Certain strains of cannabis are quite susceptible, while others show a high level of resistance. Research is underway to characterize these resistance strains and to determine how they can be used in a breeding program. The range of plant species also affected by cannabis-infecting Golovinomyces requires further study. 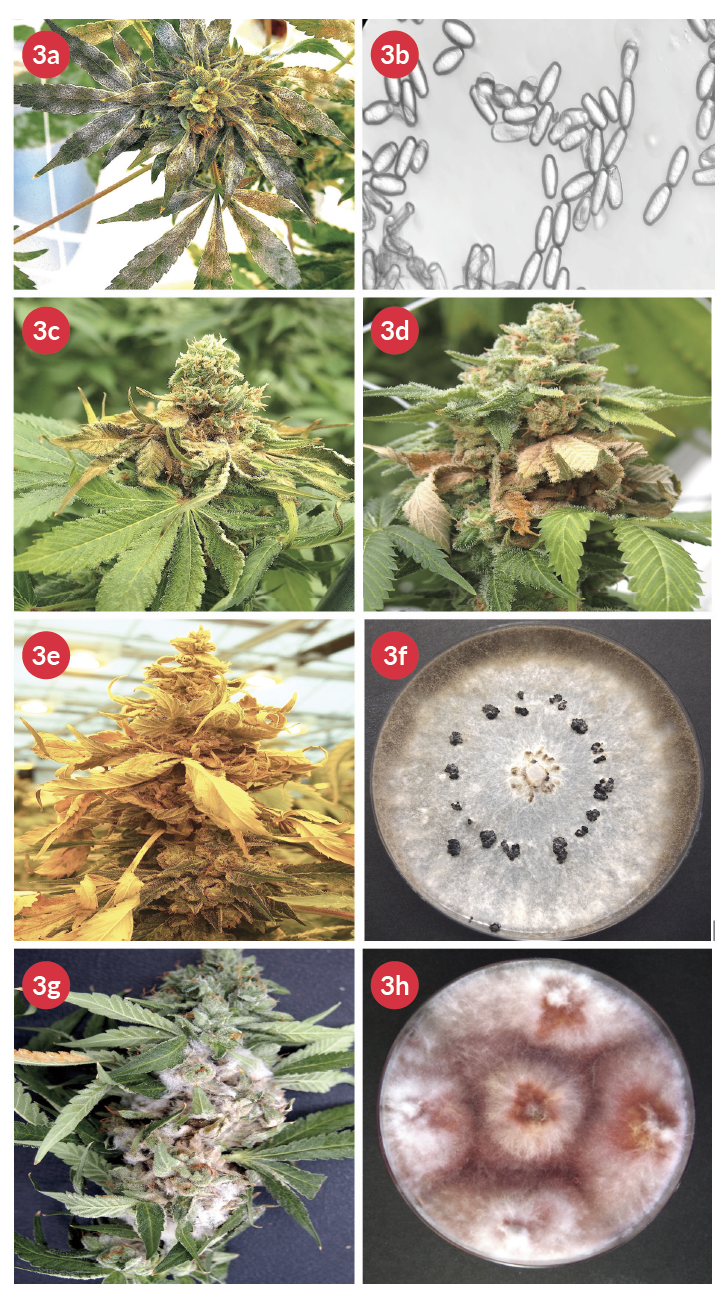 Figure 3: Powdery mildew infection causes white fuzzy growth [a] with lots of spore production [b]. Bud rot caused by Botrytis results in browning and rotting of the buds [c,d,e] from which the pathogen can be isolated [f]. Fusarium bud rot results in pinkish-white mycelium [g] and a distinct red appearance of the pathogen [h].

The use of vaporized sulphur can also significantly reduce disease if applied for two to eight hours during night-time for several days a week. The use of sulphur should be balanced with the potential negative impact on insect biocontrols. Exposure of plants to artificial UV-C light from hand-held lamps or mechanized booms for brief daily periods of time (not exceeding 10 sec) has been shown to limit powdery mildew development. Weekly application of products that contain potassium bicarbonate is also effective at managing powdery mildew. Biological control products still need to be assessed to establish the best environmental conditions under which they could be used. Removal and disposal of infected leaves may slow down the development of powdery mildew.

At the time cannabis buds reach their fully developed stage and approach harvest (usually in weeks 6 to 8 of the flowering period), bud rot pathogens such as Botrytis and Fusarium develop rapidly, causing browning and rotting symptoms [3c,d,e]. The exact time period during which these infections take place still needs to be determined, however. Favourable environmental conditions during day or night-time can give rise to symptom expression some days later.

Cannabis strains that produce large and compact inflorescences create a microclimate that favours growth of the pathogen internally, and these are more susceptible to bud rot infection. Similarly, the presence of a large number of bracts surrounding the buds can enhance bud rot development by providing a suitable microenvironment for spore germination. Detailed comparisons of the architectural structure of cannabis flower clusters will provide more insight into how bud rot develops on different strains.

The ambient environmental conditions which promote pathogen development are relative humidity levels of over 75% and temperatures in the range of 15 to 25°C, making this a seasonal disease occurring during late summer and fall months. Botrytis infections are significantly reduced at 28 to 30 °C or higher. More recently, bud rot infections due to Fusarium species are causing concern for producers [3g,h]. These can develop throughout the year since the pathogen can grow at 15 to 35 °C.

Management Options: The sources of Botrytis and Fusarium inoculum on greenhouse cannabis may include spores released from decaying vegetation, from diseased plants within the greenhouse, or from neighbouring crops in the vicinity of the greenhouse.

To reduce the level of spores and spread, the removal of diseased buds is highly recommended. Modifying the greenhouse environment to maintain drier and hotter conditions with humidity levels below 60% reduces growth and spore production by the pathogen as well.

At present, the implementation of biorational approaches to reduce bud rot development is under investigation. Similar to the early applications of beneficial microbes made to rooted cuttings for the prevention of Fusarium and Pythium, there is ongoing research to explore whether competing microbes can reduce bud rot when applied to the buds prior to Botrytis infection. Similarly, sprays of products containing ingredients such as hydrogen peroxide or potassium bicarbonate, if made without causing injury to the tissues or increasing moisture within the flower bud, may limit pathogen spore production and spread.

There are a number of factors that can promote mold development on buds after harvest. These include, but are not limited to: any disease symptoms that may be present at harvest, the population of molds in the air of the growing environment and trim rooms, the manner in which the buds are handled, and drying and storage conditions, especially air circulation, temperature and relative humidity.

The most prevalent species of fungi identified to cause post-harvest mold problems include Penicillium, Aspergillus and Fusarium. Remediation efforts should address reducing disease development on plants prior to harvest, reducing mold levels in the air, preventing excessive damage to buds during processing, and adjusting drying rooms to provide ideal conditions.

Recent reports indicate that viruses and viroids are causing as yet undetermined reductions in growth and quality of cannabis.

The most prevalent at this time are Hop Latent Viroid (HLVd) and Tobacco Mosaic Virus (TMV). Both of these pathogens are present in most cannabis production locations in Canada, though other viruses are likely to emerge as research continues in this sector.

HLVd is reported to cause stunting, increased lateral growth of branches, brittle stems, changes in the appearance of leaves, and a reduction in cannabinoid content of inflorescences. TMV can cause mosaic symptoms, as well as stunting and leaf curl.

Diseased plants should be destroyed and sanitation methods implemented to reduce spread of these mechanically transmitted pathogens through cuttings and handling of plants. Further research is needed to verify the distribution and potential damage caused by these pathogens, as well to develop long-term management approaches. 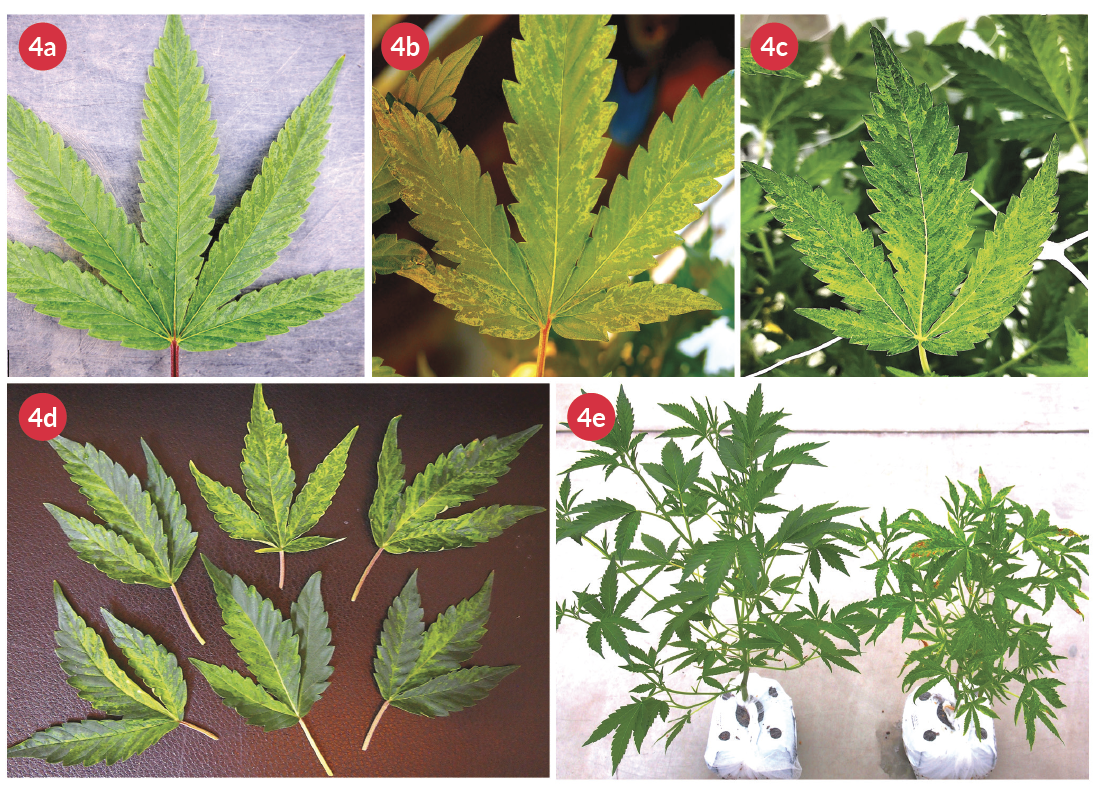 Figure 4: Symptoms of virus infection, such as tobacco mosaic virus, on cannabis include a mosaic on leaves [a,b,c,d] as well as stunting [e].


Related
Early intervention key to cannabis pest control
Taking on pests and diseases in cannabis: Vegetative to flowering
Cultivating a space for cannabis at retail
The Taste Race: Light’s impact on crop aromatic and flavour profiles