As consumers choose between purchases based on odours, colours and textures, the manipulation of light spectra could open up another door to richer aromatic and flavour profiles. 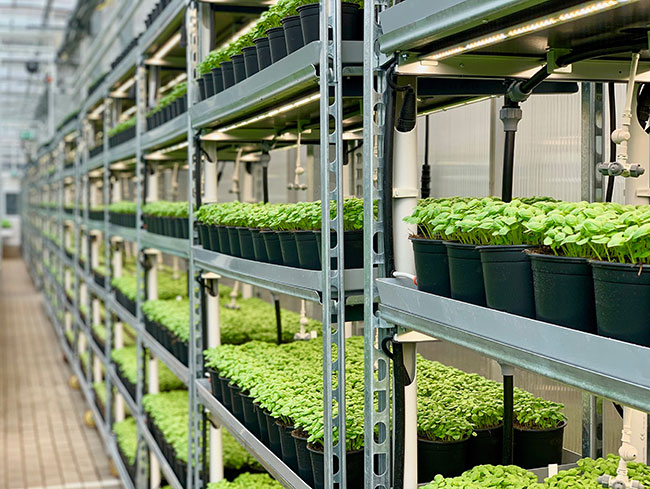 All images courtesy of Fluence by OSRAM

Have you ever heard of the phrase, “Don’t judge cannabis by its odour?”

Of course not! Consumers absolutely judge cannabis and most other crops by their odour, colour, texture and—if free samples are available—taste.

For all the KPIs that growers attribute to their operational success and decision-making, accounting for sensory perception is rarely at the top. But a three-fold increase in cannabis production means little if it tastes like decades-old arugula.

Production gains and efficiencies are part and parcel of the growth model for every greenhouse. For those growing cannabis, strawberries, sweet tomatoes, basil and other crops where taste is crucial to the consumer’s purchasing experience and the farm’s operational profitability, pursuing the perfect aromatic and flavour profile should be just as important as efficient yields.

In highly competitive industries where marketability is as crucial as volume, the taste race is on. And if plant genetics are the launch pad, then the right lighting strategy is the booster rocket.

Light spectra’s impact on secondary metabolite production and plant morphology is a well-known and observable phenomenon in modern horticulture. As plants are introduced to more intense lighting treatments, their energy and resources are diverted from primary metabolism—leaf, stem and root production—to secondary metabolism as a defense mechanism. The plant’s shift in response is ultimately what drives the production of secondary metabolites: terpenes, flavonoids and cannabinoids, among others. Yet the question remains: Which wavelengths should be introduced in a lighting strategy to yield richer aromatic and flavour profiles for a given cultivar?

Recent research from Fluence by OSRAM and Döhler examined the differences in taste and smell of sweet basil grown under far-red-enriched white light and blue/UV-enriched white light with normalized durations and intensities. In the ongoing study of plant responses to various light treatments, it’s an important step in understanding how spectral manipulation can create more complex or pronounced terpene profiles—the primary mix of constituent essential oils that determine taste and smell—in a range of crops.

This sensory data allows us to extrapolate some very interesting conclusions for growers striving to refine and perfect the taste and smell of their products to make them more marketable and, indeed, palatable.

Most importantly, it indicates that growers can manipulate light to refine their crops to yield or enhance a specific terpene profile. For example, a cannabis cultivator who grows sour diesel—a popular genetic strain with a signature pungent citrus smell and taste—may want to introduce more blue/UV light into their broad-spectrum lighting strategy to encourage more production of the monoterpene limonene.

In a study conducted by Fluence by OSRAM and Döhler, panelists participating in a sensory study observed different tastes and smells of sweet basil grown in far-red enriched light versus blue/UV-enriched light.

The same inferences can be made across a variety of crops and their corresponding terpene profiles. Beta-caryophyllene, a sesquiterpene that yields a spicy, musky aroma and flavour and is a constituent terpene in black pepper, cloves, rosemary, hops, cannabis and other crops, similarly responded better to blue/UV-enriched white light, potentially providing growers with the ability to enhance specific characteristics of their crops and maximize every plant’s potential.

Other crops, like strawberries, are much more complex and require even more nuanced approaches. Early research into strawberries’ response to various light spectra, for instance, has shown that adding red light into a broad-spectrum strategy significantly increases flavour intensity, aroma and juiciness.

Research into the chemical responses to various light spectra that influence terpene production is still in its early stages, but the results so far are definitive in their own right. While many growers still justifiably rely on genetics to dictate plant quality—including aroma and taste—the next wave of cultivation innovation will ultimately be characterized by how environmental controls (the most crucial being light) can enhance the characteristics and traits already present in a given genetic profile. That’s especially true for the next wave of cannabis consumers whose purchasing behaviour is increasingly driven by how a product tastes and smells. Since secondary metabolite production—and the benefits it yields in marketability—comes at the expense of primary metabolism, which drives growth, striking a balance between the two is the next great challenge for cannabis growers.

The natural first step for cultivators is to establish their goals based on market demand. Some may opt to maximize their yields, while others may try to differentiate their product based on quality, nutrition, aroma and other sensory factors to maximize profits.

For cultivators in the latter category, the most effective solution is to tap into the growing body of research into lighting’s myriad of effects on cannabis growth, then apply that research to their own unique circumstances and environments. Practically, that could involve designating a small research space to test a few different cultivars under different spectra to find the right combinations of light and genetics to yield a flavour and aroma profile they can take to market.

In the industries where smell and flavour are just as important as production volume, that could mean a new opportunity to carve out a competitive advantage and deliver differentiated products that meet growing market demand.

David Hawley, PhD, leads the scientific research initiative at Fluence by OSRAM as the company’s principal scientist. His experience in controlled environment systems, horticultural lighting and the cannabis metabolome continuously drives the company’s lighting research to explore the interaction between light and life.