An update on greenhouse biomonitoring technology introduced in 2021 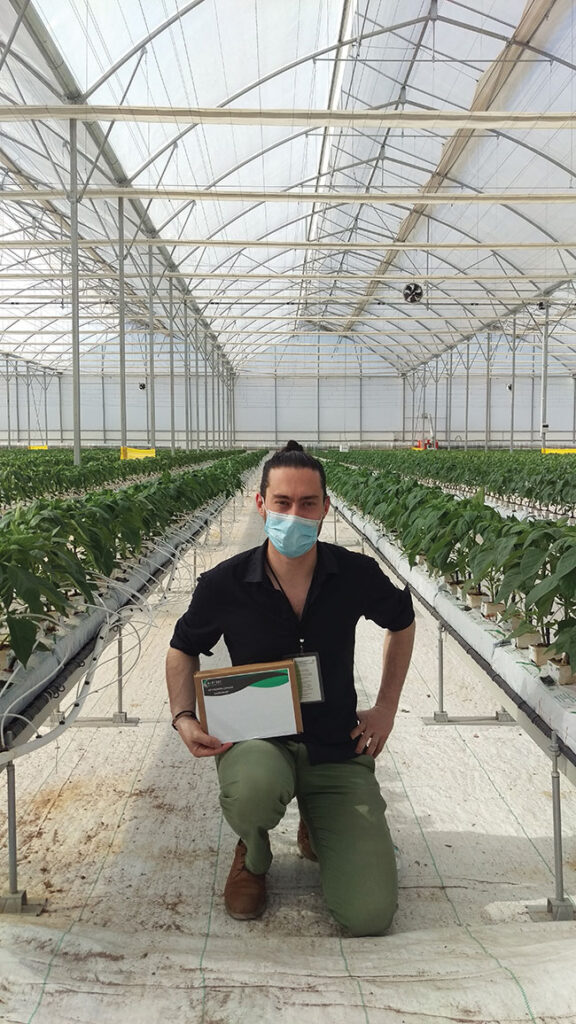 During his early days with Harvest Genomics, Rémi Maglione developed a proprietary method of taking samples from plant tissue but also from swabs of greenhouse surfaces for ToBRFV and other viruses.

A reliable, fast and inexpensive way to detect viral plant diseases like the tomato brown rugose fruit virus (ToBRFV) on plant leaves and other greenhouse surfaces sounds like a dream, but it’s already a dream come true – and developed right here in Canada.

ToBRFV (rugose) is of particular concern for greenhouse growers around the world as it’s a serious disease that has spread quickly since its first appearance in 2014.  As we explained in our report last year, before this new technology from Ontario-based Harvest Genomics was available, greenhouse growers were faced with expensive, potentially inaccurate tests, and in general, longer wait times.

To test the effectiveness of their sanitation procedures and/or new sanitation products, growers had to submit plant samples to Europe for PCR testing. A positive PCR test, which targets only a tiny portion of the virus genome, could signify a virus is present, but these tests (about $100 each) are also prone to false positives that can lead to unneeded losses for producers. A negative PCR test could be accurate but also could be inaccurate in the sense that the test could be faulty or because there wasn’t enough of the pathogen present to test.

With a positive PCR test, additional bioassays (less than $100) to test for virulence and/or sequencing are required to confirm the virus identity (sequencing costs about $1,000 per sample but it’s free from the Canadian Food Inspection Agency). All in all, it takes anywhere from a few days to over a week to get results using these technologies.

In addition, plant tissue samples were the only option – testing surfaces was pretty much impossible because they generally only have trace levels of viruses.

New technology
During his early days with Harvest Genomics, co-founder Rémi Maglione developed a proprietary method of taking samples from plant tissue but also from swabs of greenhouse surfaces (plant leaves and more) for ToBRFV and other viruses.

The Harvest Genomics rugose testing then runs samples through a small genetic sequencing device made by a British company named Oxford Nanopore. The company has results back to clients in two days at about $150 per sample.

In 2021, Ontario Greenhouse Vegetable Growers partnered with Harvest Genomics (in collaboration with Cara McCreary, greenhouse vegetable IPM specialist at the Ontario Ministry of Agriculture, Food and Rural Affairs) to test the technology. Using comparisons with conventional testing technology, they found the Harvest Genomics system to be completely accurate.

Progress in 2021
About 3,000 tests for ToBRFV were done last year by Harvest Genomics for greenhouse operations across Canada and the United States. “That represents swabs from about 30 to 40 greenhouses,” Maglione says. “Some of the tests were done for IPM managers who manage several farms. The tests help greenhouse operators to monitor new virus outbreak, virus variants, make sure cleaning processes are working and also enable them determine whether a new cleaning product is working. This year we are doing from 100 to 200 tests a month, and will likely close the year with about the same total as last year.”

There was a huge number of tests to process last year in August, the month when greenhouses operators typically do their annual clean-out. This pushed Maglione and his team to streamline and change protocols to deal with the volume surge and he says they are ready for an even larger surge this year.

Portable platform
In April, BioEnterprise Canada bestowed $40,000 to Harvest Genomics to further develop a portable version of its tech. This means that eventually, the system will be able to be purchased and used by greenhouse consultants or by greenhouse operators themselves. It will also open up new possibilities for researchers.

A lot of progress on the portable platform was made last year. Harvest Genomics CEO and co-founder Chris Grainger worked with OMAFRA and the Ontario Potato Board to extend the concept of portable DNA sequence-based testing for identifying variants of Potato Leaf Blight captured on spore-trap devices placed in potato fields.

The BioEnterprise funding will also be used to develop new tools for sample collection from the air. As reported in a University of Quebec at Montreal article last year, Maglione said: “I imagine a greenhouse equipped with a multitude of bio-sensors that can detect the presence of micro-organisms in the air, and thus signal the appearance of a new disease even before the human eye is able to detect it. Detect the first symptoms on a plant,” explains the doctoral student. “A grower could immediately know which plants are infected and he could remove them before they contaminate others.”

Bacteria in the air will be the first focus for air detection, and several Quebec cannabis producers (names not available at this point) have agreed to participate in that type of sampling technology development. This project involves capturing the whole microorganism community, pathogen, neutral and beneficial organisms, but in the future, this technology could be used to monitor every known pathogen present in the air.

And just at the end of June 2022, Maglione developed a way to increase the virus fraction in the water in order to detect water-borne viral diseases in greenhouses and other settings. “It’s working well,” he says. “I have also developed a protocol to test fabrics, clothing or coveralls worn in greenhouses for example, to see if they are contaminated.”

Potentials abound
Other agri-food applications for this sampling technology include soil and seed testing, many food safety scenarios and the very serious issue of resistance to herbicides. Indeed, the first Harvest Genomics service was testing weeds for genetic mutations related to herbicide resistance.

The technology could also be used to sex plant seedlings, do genetic mapping and test seedlings or livestock for various genetic markers to allow faster selection in breeding programs and for many other purposes.

Harvest Genomics is currently working on testing for “a new pepper disease,” but cannot say more at this point.

It’s clear that the possibilities for Harvest Genomics technology really are endless, from countless human and veterinary medicine applications to prevention of food product fraud and global biosurveillance of emerging pathogens.

But with regard to the greenhouse sector at this point, Maglione says, “I’m thrilled to help growers alleviate their economic losses by providing them the most accurate ToBRFV testing on the market.”