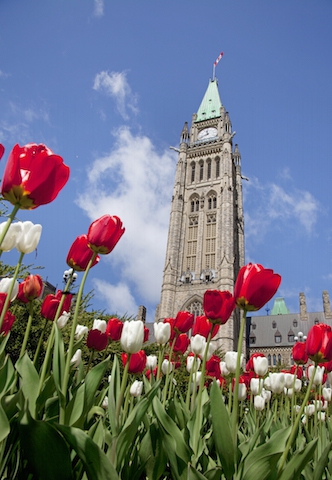 July 17, 2015, Ottawa, Ont. — This year marks the 70th anniversary of the liberation of the Netherlands and the end of the Second World War.

It also marks the 70th anniversary of the first gift of 100,000 Dutch tulips bulbs sent in 1945 to Canadians as a symbol of appreciation for the role Canadian soldiers played in the liberation of the Netherlands and the hospitality Canada provided to the Dutch Royal Family in Ottawa during the war.

Michel Gauthier, executive director of the Canadian Garden Council and president of the World Tulip Summit Society came up with the idea to celebrate the anniversary of that first gift of tulips.

“Gardens play a significant role in Canadian culture and heritage,” said Gauthier, “and the tulip represents both to all Canadians.”

Today, thanks to a donation of 100,000 tulip bulbs from Vesey’s Bulbs of P.E.I., the Canadian Garden Council is offering communities across the country an opportunity to receive, at no charge, one of the 140 Dutch-Canadian Friendship Tulip Gardens – each containing 700 red and white tulip bulbs.

Underscoring the enormous collaborative nature of this program, Canada Post has agreed to cover the costs associated with delivering the Friendship Tulip Gardens.

The deadline for applications is Aug. 30.

Each of these gardens will be linked to a symbolic 70th Anniversary Dutch-Canadian Friendship Tulip Garden consisting of 7,000 red and white tulip bulbs, also donated by Vesey’s) to be planted in our nation’s capital as part of the Canadian Tulip Festival.

The 141 gardens will be featured on the 2016 edition of Canada’s Garden Route.

“The tulip is the most recognized harbinger of spring,” says John Barrett of Vesey’s. “It has come to symbolize so many things to the people of Holland and Canada. Peace, compassion, friendship, trade, beauty and the memories of a nation coming to the aid of another. We are proud to be able to gift a flower that means so very much to Canadians.”