Last year was indeed cause for celebration for Central Alberta
Greenhouses, as the family-owned business celebrated 75 years in
business.  That certainly makes it one of the oldest, if not the oldest, operating
greenhouse operation in the province. And if that’s not distinction
enough, at eight acres it’s probably the largest greenhouse operation
between British Columbia and Ontario. 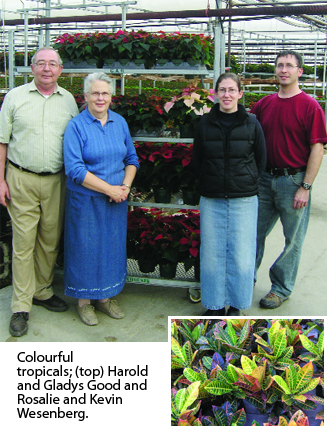 Last year was indeed cause for celebration for Central Alberta Greenhouses, as the family-owned business celebrated 75 years in business.

The company was one of the stops on last fall’s Alberta Green Industry Conference bus tour.

By way of background, company founder Walter Good built his first greenhouse in Rocky Mount House, Alberta, in 1931. He and his wife Myrtle and their family relocated to Red Deer in 1949, establishing Central Alberta Florists Ltd. as a retail-grower.
The greenhouses are now operated as Central Alberta Greenhouses Ltd., with Harold and Gladys Good and their daughter and son-in-law Rosalie and Kevin Wesenberg as partners. Kevin is the general manager.

At one time, the company had seven retail shops. However, over the years, that part of the business was scaled back to one large 20,000-square-foot retail flower shop and garden centre in Red Deer, now owned and operated by Bill and Sandra Good, the son and daughter-in-law of Harold and Gladys.

Harold says his dad started growing greenhouse tomatoes, before switching to bedding plants. He then moved into cut flowers, including carnations and snaps. They later transitioned into more retail-geared production, including funeral flowers.

Delegates on last fall’s tour were impressed with the large variety of potted plant production, which, this being the fall, of course was dominated by 125,000 poinsettia plants in various sizes and colours.

“We don’t have the same variety as we did when we had the seven flower shops,” notes Harold. “Back then, we tried to grow everything we needed for our shops.”

The only cut flowers grown today are white pompom mums for Christmas. They may take about four weeks longer to grow than other cut mums, but they have great consumer appeal. “We can get a premium price for them because no one else is growing them,” says Harold.

The bulk of their sales are into the Edmonton-Calgary corridor, though their plants are shipped as far away as Thunder Bay.
Their most recent expansion was two years ago, when one and half acres was added. This brought them to eight acres in total.
They recently added a highly automated and state-of-the-art flat filler line. Included is a soil handler, automatic transplanter, tagging machine and watering tunnel. They can now prepare up to about 3,000 flats a day, compared to 1,000 a day before the new equipment arrived. The system is as consistent as it is efficient, ensuring greater crop uniformity in the production houses.
The company has also installed more automatic watering systems, great for bedding plants as well as for poinsettias before they go on individual tubes.

The computerized environmental control optimizes growing conditions, which can be especially challenging given the range of products grown.

They have steam boilers and use natural gas. Steam works well for them. “It’s very efficient,” explains Harold. “We compare well with other growers on heating costs per square foot.”

The company also installed about two and half acres of energy curtains. This meant that even with the recent 1.5-acre expansion, gas bills have remained about the same as they were before the addition. “They’re a big help, that’s for sure.”
While they currently have no plans to expand again, they might look at adding more energy curtains, or perhaps more product handling equipment to reduce labour costs.

Year-round employment hovers at about 45, rising to 90 or so in peak season.

Harold grew up the business, and even lent a hand with some transplanting when he was about five. However, he began working steadily with his dad when he was 14, sandwiching in time between his high school studies. “This is my 53rd full year in bedding plants,” he enthuses.

He even recalls when cabbages were grown in outside frames. The plants were dug and rolled in newspapers as the orders rolled in.
Harold said the 2006 poinsettia season was very good. The 2007 spring bedding plant season had gotten off to a good start, before an unexpected – and most unwelcome – snowfall on May 24 slowed things a little. “But things will warm up again, and we should have it wrapped up in about 10 days.”