What a difference microclimates make in trials assessments. 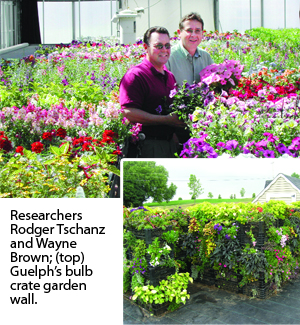 As reported in the November issue of Greenhouse Canada, we carried out the first greenhouse performance trial with plants grown in 11 cm pots last winter/spring, culminating in an Open House on May 4th for growers and allied trades representatives to view.

The second trial, described here, was designed to test post-consumer performance of the same plants grown outdoors in containers. Two sites, the Vineland Research Station and the Guelph Trial Garden (GTG) at the Guelph Turfgrass Institute, were selected for this trial to observe performance under different environmental conditions.

The Vineland site was in an area adjacent to the greenhouse complex. This site was paved with asphalt and surrounded on three sides by low buildings. The full sun exposure and sheltered nature of the Vineland site created a warm and at times, hot, microclimate for the test plants.

By contrast, the Guelph site could be characterized as being windy, surrounded as it was by turf research plots without windbreaks. Like the Vineland site, the Guelph trial received full sun exposure. The container site at the GTG was covered by black fabric landscape mulch. The spreading petunias and SuperCal containers were placed on plant stands allowing the tops to be approximately one metre off the surface of the mulch. All other containers sat directly on the mulch. At Vineland, the petunias and Supercals were placed on concrete blocks about 80 cm in height.

Because the plants were grown cool during the greenhouse phase of the trial and received no growth retardants, it was necessary to pinch the plants back during the second week of May to remove the leggy growth that developed due to high greenhouse temperatures of early May. Four plants of each cultivar were transplanted into 50 cm patio pots from ITML and filled with Sunshine #1 potting mix during the week of May 21 and immediately moved outside for growing on.

The pots at each site were watered by hand using a breaker throughout the growing season. The differing water quality and fertilizer delivery technology available at each site necessitated the use of different fertility regimes.
At Vineland, the crop was fertilized with 20-8-20 at 150 ppm N with every watering.  The spreading petunias, callitunias (the SuperCal series of callibrachoa/petunia hybrids), iresine and coleus received 35 g/pot topdressing of Nutricote ( 14-14-14 Type 100) in addition to the constant feed in the irrigation water. All other plant species in the Vineland trial were fertigated only. Additional iron chelate was added twice during the season to maintain foliage colour, particularly because a number of the Supertunia Minis began to show iron chlorosis. No deadheading was done throughout the summer growing season.

At the Guelph site, all containers were watered when needed – at least every other day. The high pH of the irrigation water necessitated using a pH-modifying fertilizer (Plant Prod pH Reducer 18-9-18) when fertilizing once a week at 300 ppm N. Every container at the GTG site received a topdress application of 70 g of Nutricote (14-14-14 Type 100) during the first week of June. No iron chelate applications were needed during the growing season.

Pest problems at both sites were limited to aphids on the SuperCal series in Vineland and all petunias and SuperCal entries in Guelph. Both sites were sprayed twice during the season to control the aphid outbreaks.

COMMENTS ABOUT THE VINELAND CONTAINER TRIAL
by Wayne Brown
n The evaluation reported was done on Sept. 27. The Supertunia series from Proven Winners, and the Surprise and Sweet Surprise series from Dummen proved to be excellent summer performers. The Supertunias are more vigorous in comparison, but the light-coloured cultivars tended to fade during the heat of the summer. The Dummen series generally have darker green foliage. The new Dummen Potunia series performed very well throughout most of the summer, but was fading by the end of the season. The Supercal callitunias performed very well in the greenhouse during the spring, but did not perform nearly as well outdoors under the conditions to which we exposed them.

None of the lobelia performed under the hot conditions in which they were grown at Vineland after late July.
The upright angelonia from both Proven Winners and Ball Flora Plant performed well in full sun and high temperatures. Unfortunately, the spreading types did not perform as well and it may have because of overwatering on our part.

The habit of bidens grown outdoors is very different from that in the greenhouse and surprisingly even with their fine foliage dries out quickly. The same holds true for chrysocephalum from Proven Winners. Although neither bidens nor chrysocephalum have particularly attractive plant habit in the greenhouse, all varieties of both species are superior performers outdoors.

The Playful series of snapdragons exhibited attractive plant habit, but once the heat of the summer set in, blooming was very sparse until late September when cooler temperatures arrived. ‘Luminaire Sugar Plum,’ however, bloomed all summer long, but because of its prostrate and trailing growth habit, its use may be somewhat restricted. This lack of blooming may have been because of deadheading, but we took the approach that the average consumer is not going to spend time deadheading, so it was important to see if the plants could push through the seed production.

The first of three important lessons I reconfirmed for myself this past spring and summer is that it is important to trial plants outdoors for their performance under our summer growing conditions. What may look great in the greenhouse in the spring may prove to be a disaster outdoors.  Do your own testing – you owe it to your customers!

Summer 2007 was a great testing year. If, as an industry, we want our customers to come back year after year and purchase even more spring flowering plants for their gardens, patios, decks and balconies, then it is important that we provide them with those plants that will perform well under Ontario conditions.
The second lesson is that fertility is crucial to their performance. For the retail-grower, this is your opportunity to provide a value-added component. Add slow-release fertilizer to the container at point of sale as well as encouraging your customers to water regularly with an acid reacting water-soluble fertilizer, such as 20-20-20.
And finally, using larger container sizes improves overall plant performance greatly!

ACKNOWLEDGMENTS
n We would like to thank ITML, Sun Gro, Plant Products, COPF, the Canadian Greenhouse Conference, Proven Winners, Ball Horticulture, Dummen, OMAFRA, and the University of Guelph for their support of this trial.

Wayne Brown is the greenhouse floriculture specialist with the Ontario Ministry of Agriculture, Food and Rural Affairs.
Rodger Tschanz is a greenhouse technologist with the Department of Plant Agriculture at the University of Guelph.