“The key to success,” says Ontario flower grower Victor Debono, “is having a clean fuel source.” 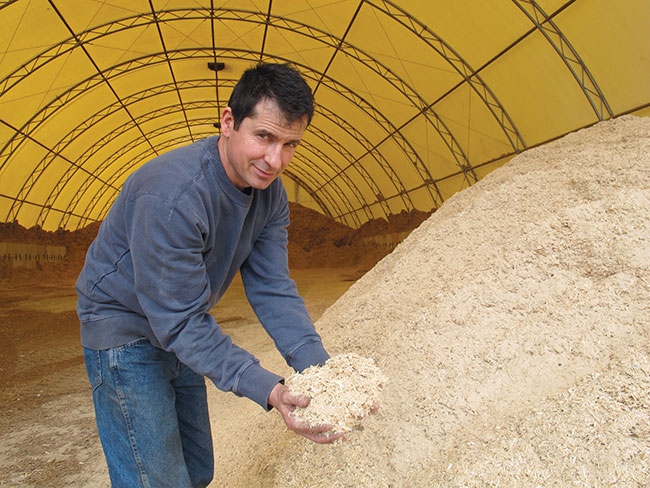 They have been heating with biomass for more than a decade

June 2015 – Natural gas prices may have dipped the past few years, but there’s still considerable interest in biomass heating.

But if you’re getting into it, expect a steep learning curve.

“It was quite an education,” says longtime Norfolk County grower Victor Debono, manager of Debono Greenhouses & Garden Centre. “It has its ups and downs, and its fair share of challenges.”

He’s been using biomass heating for more than a decade.

The farm, which includes three acres of greenhouses, is located about an hour southwest of Hamilton (and only a 10-minute drive from the Greenhouse Canada offices in Simcoe, Ont.).

The main crops are year-round potted plants, along with spring bedding plants, containers and perennials. About 90 per cent of the plants are sold wholesale, with other garden centres and the Ontario Food Terminal among the customers.

There are 12 full-time employees, with about 22 in peak season.

Helping Victor manage the business are his mother, Lidia, and his brother, Edward.

As for the retail side of the business, most customers are drawn from up to 45 minutes away. In addition, the garden centre is also popular with cottagers heading to summer properties along nearby Lake Erie.

Debono Greenhouses & Garden Centre has its roots in 1962, when Victor’s grandparents first began farming on the site. There was some livestock

along with field vegetables to keep the family busy. His parents began growing flowers about 52 years ago on the farm, beginning with a pair of wooden greenhouses (that, at the time of our visit, were still in use – those structures are being replaced this summer by ultra-modern greenhouses).

Debono returned to the farm in 1991 following his graduation from the University of Western Ontario where he earned a degree in business.

He grew up in the business, and learned a lot about growing plants from his parents. He also found the culture information available from breeders and suppliers quite helpful. He then added some of his own trial and error in working with new crops and varieties. “You’ll always make a few mistakes along the way,” he explains with a grin.

He also returned with a number of new ideas. He helped direct the business into new markets, including perennials, potted plants and poinsettias, to name a few.

He also wanted to better manage their energy costs, working in conjunction with the family’s other business, Norfolk Disposal, a major waste-disposal company in the region. Waste wood material is among the products processed by the firm.

FIRST BIOMASS BOILERS INSTALLED IN 2004
In 2004, a pair of biomass boilers were put into service for the greenhouses, followed by a larger unit in 2007. The timing was perfect, because natural gas prices were beginning to rise. They now had the biomass buffer in place to cushion their heating bills. “Natural gas prices back then were jumping.”

The biomass boilers now heat about two-thirds of the greenhouses, operating about nine months of the year.

Natural gas handles the rest of the heating requirements.

Biomass heating is clearly not for the faint of heart. “The maintenance costs the first few years were more than we anticipated,” Debono says. “The payback is a little longer than they tell you.”

The key to success is having a clean fuel source. Since the material is scrap wood, it must be graded and all the metal must be removed. It is then ground to the right size for efficient auguring.

The material is then stored in large coverall structures to keep it dry. Wet wood takes away a lot of BTUs, but it also freezes if left outside in the winter.

“If it’s not clean,” Debono explains, “it will mean a lot of sleepless nights.”

Over-sized wood chunks can clog the system, and must be removed, day or night. “It’s definitely not the same as turning the switch on a gas boiler and walking away.”

They have been heating with biomass for more than a decade

TEAMWORK WITH THE BOILERS
And it’s best if you adopt a team approach for managing the boilers. “It would be too much if it was left for one person to manage.”

Having said that, biomass can be effective in controlling heating costs. And with slim margins, growers need all the help they can get.

Processed wood waste is also used in livestock bedding and for wood pellets, so there is competition for the material. So far, there is enough to meet all market demands. “The finely ground bedding material gets top dollar,” Debono notes.

FOCUS ON EFFICIENCY THROUGHOUT THE OPERATION
In addition to fuel cost management, they’re also fine-tuning growing practices for each crop to see where labour can be reduced.

For example, cuttings are now brought in at a later growth stage. As well, they’re trying to do less pinching.

Variable speed motors are installed when equipment needs to be replaced, and the farm is continuing to move from fans to more roof venting.

Energy curtains are increasingly being added.

“It all adds up,” Debono says. “Labour and electricity costs are going to be the big challenges for growers.”

They don’t have supplemental lighting, except for some incandescent fixtures used for photoperiod control.

LEDs will be the next major innovation in the industry, and Debono is taking a wait and see approach. “We’ll wait a year or two to let the companies sort things out. There is a lot of good research being done. I feel there will be some phenomenal energy savings possible with LEDs.”

It’s quite possible LEDs will eventually be used in the new germination/propagation greenhouses being built this summer.

MARKET CHANGES
Debono has seen a number of changes in the market over the past quarter century, and the business has changed along with them.

Social media has a major role to play in plant marketing.

Debono Greenhouses and Garden Centre has an effective website. It features a number of personal touches.

“We’ve taken the time to hand plant every seedling with care, and would very much like to send our quality home with you,” notes one section on the home page.

The “Products” page is subdivided into Vegetable, Spring, Summer, Fall and Holiday crops, each well illustrated. There is also an informative “FAQs/Tips” page, a great way to stay in touch with customers.

Today’s consumers are also increasingly looking to container gardening. “It’s a move to instant gratification. They want planters that are already made up, they just have to set them out and enjoy them.”

The bedding plant segment, however, is decreasing each year, though the demand for larger plants is continuing.

And for a third-generation family business that recently celebrated its half-century in farming, it’s all about family.


Related
Growing fuel potential of agro-biomass
A solar-powered irrigation system
Blowin’ in the wind
From the Editor: February 2010