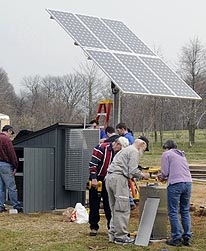 April 27, 2009, Washington, D.C. — The U.S. National Arboretum is “going green” with the installation of its first solar-powered drip irrigation system that will save electricity and water at the 446-acre facility operated by the Agricultural Research Service (ARS) in Washington, D.C.

April 27, 2009, Washington, D.C. — The U.S. National Arboretum is
“going green” with the installation of its first solar-powered drip
irrigation system that will save electricity and water at the 446-acre
facility operated by the Agricultural Research Service (ARS) in
Washington, D.C.

The new system is part of a long-range plan to update and improve the
arboretum grounds. Future plans include installing a larger solar
collector near the National Capitol Columns and solar shingles on the
Arbor House, which houses the gift shop and visitor restrooms.

Installation of the new system marked the end of a week-long workshop
conducted by students and faculty from Alfred State College of the
State University of New York. The workshop – attended by arboretum
staff, contractors and homeowners – provided hands-on instruction on
how to construct and use the system and its many benefits.

Located in Nursery 5, which is used to conduct research aimed at the
development of improved trees for landscape use, the new system
consists of six solar panels that collect sunlight, a battery that
stores the energy, and a converter box that converts the stored energy
into electricity used to run the nursery's drip-irrigation system.
Because of the nursery's remote location, installing solar panels was
less expensive than running an electrical line from the main power
source, approximately a half-mile away. As a result, the arboretum will
see immediate savings on costs.

The latest project is a staff-driven effort to cut energy costs and conserve resources. The new system took less than one year to complete. Arboretum Director Tom Elias first met Alfred State representatives during the U.S. Department of Agriculture's (USDA) Bio Energy Awareness Days (BEAD II) exhibition held at the arboretum last June. The meeting led to a five-year cooperative agreement to develop and install green technologies that will help the arboretum reduce its carbon footprint.

The arboretum's new system serves as a model for more energy-efficient landscape gardening. Solar power can be used in urban and suburban areas and is applicable to all types of power systems. Gardeners can use it to power water features, such as fountains and waterfalls, and irrigation systems.

ARS is the principal intramural scientific research agency of the USDA.