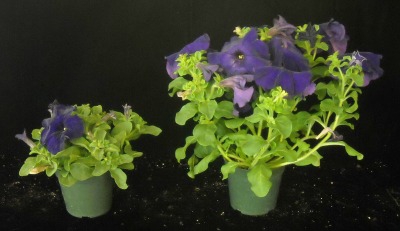 In experiments comparing high tunnels with greenhouses for growing bedding plants, petunias finished in an unheated high tunnel (left) were shorter and more compact than those grown in a heated greenhouse (right). Photo courtesy of Neil Mattson.

According to the researchers, energy for heating commercial greenhouses in northern climates can account for 10-30 per cent of total operating costs.

At Cornell, all 10 species survived in the unheated high tunnel environment when moved on April 1. The lowest recorded temperature at the Cornell high tunnel was -3.2 C.

“It is interesting to note that the cold-sensitive species angelonia, celosia, and vinca survived this short-term cold exposure,” said corresponding author Roberto Lopez.

However, most of the species showed a significant delay in flowering when grown in the high tunnel compared to when they were grown in the heated greenhouse. Although seven of the species exhibited a delay in flowering in the high tunnel compared with those in the heated greenhouse, there were no differences in days to flower for geranium, osteospermum, and viola grown at Cornell, and viola grown at Purdue.

At Purdue, several species were lost because of a cold temperature event (-6 C), necessitating a second planting (April 8).

“Delaying the high tunnel transplant date was an effective method for reducing plant mortality and reducing delays in days to flower because of the cold temperature environment of the high tunnel,” the authors said.

For the second planting, osteospermum was the only species that flowered significantly later in the high tunnel, a delay of seven days compared to the greenhouse-grown plants.

According to author Neil Mattson, besides savings in energy costs, finishing cold-tolerant bedding plants in unheated high tunnels may enable growers to meet their seasonal peak space demand in a cheaper-to-build high tunnel while still providing some protection compared to the outside environment.

“Further, in the current study finishing bedding plants in high tunnels led to improvements in measures of plant quality for some crops, such as shorter, more compact plants than greenhouse-grown counterparts. This could reduce the need for application of chemical plant growth regulators.”

The authors concluded that production of cold-tolerant annuals in unheated or minimally heated high tunnels can be a “viable alternative” for commercial producers aiming to reduce energy costs.

“While we acknowledge the risk of finishing spring bedding plant crops in an unheated environment, there is a potential for gains in profitability for producers because of the lower capital and energy costs of high tunnels as compared with conventional greenhouses,” the authors said.

The complete study and abstract are available on the ASHS HortTechnology electronic journal website.

Founded in 1903, the American Society for Horticultural Science (ASHS) is the largest organization dedicated to advancing all facets of horticultural research, education, and application. More information at ashs.org.