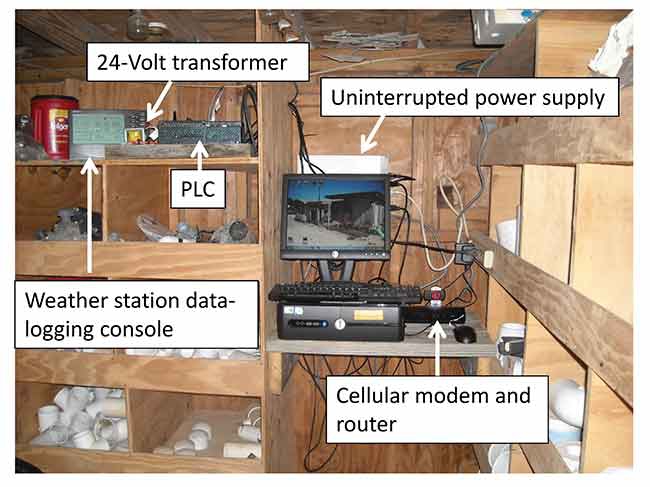 February 2016 — Determining irrigation run times that minimize water use while sustaining optimal production is a difficult task for container nursery managers. The confined volume imposed by the container provides little buffer against under-watering and over-watering.

The net effect is that many growers guard against under-watering by applying more water than is needed. Applying water based on plant need requires an objective approach.

In this article, we briefly describe CIRRIG and how it was used in a field trial where CIRRIG technology was compared to the nursery’s traditional irrigation practice.

CONTAINER NURSERY FOCUS
CIRRIG is an irrigation management program that was developed for container nurseries in humid climates of the southeastern U.S.; its applicability in other regions (e.g., Canada) and other climates has not been tested.

For the field trial, Sweet Viburnum (Viburnum odoratissimum) grown in 25-cm-diameter containers in a peat-bark substrate with controlled-release fertilizer served as a test crop. Plants were grown six months (March to August of 2014). All production activities were managed by nursery staff. For the CIRRIG program, we monitored per cent plant cover and plant size once every two to three weeks (or after a pruning or spacing) throughout the trial. We monitored flowmeter readings and plant growth (80 plants per zone) throughout the trial.

WATER USE REDUCED
Size and shoot dry weight of plants produced with the two irrigation practices were not significantly different (Fig. 2). Cumulative irrigation water was reduced 21 per cent (107 vs. 135 cm) for the CIRRIG and nursery schedules, respectively (Fig. 3). This trial demonstrated that CIRRIG can be used to effectively guide irrigation. While the scope of this trial was limited, it provides evidence that daily adjustments to irrigation based on estimated ET and effective rain can conserve irrigation water without reducing plant growth.

CIRRIG requires the user to monitor and input plant production conditions in the irrigation zone and as such requires active involvement by nursery staff to make it work. CIRRIG is currently being used to automatically irrigate more than 200 zones of sprinkler-irrigated container production in a container nursery in Virginia. The nursery devotes about 10 hours per week for day-to-day management of CIRRIG. The cost for adopting CIRRIG technology at a nursery will depend on the cost of the two main components: CIRRIG and the computer-controlled irrigation system.

COMMERCIALIZING THE TECHNOLOGY
The rights to CIRRIG are owned by the University of Florida and we have just begun investigating opportunities to offer the program to interested growers. We envision that future users will enter into an annual subscription agreement that includes upfront training costs to ensure the nursery is using CIRRIG properly. The CIRRIG subscription would cover technical support as well as maintenance and program improvements. We estimate an annual subscription will cost approximately $10,000 US, which will vary depending on nursery size and number of consulting trips needed. The second component is the installation of a computer-controlled irrigation system and this cost will vary tremendously based upon nursery size, complexity, pumping challenges, local network upgrades, and other features (e.g., fertilizer or chlorine injection). The irrigation control contractor that installed the PLC system at the nursery indicated that a 32-valve control box with control software and network connectivity would cost approximately $8,000–10,000 US. Additional costs for installation, programming and technical support are unknown, but will certainly be higher during the first few years as the “kinks” get worked out.

We believe several conditions are needed to make CIRRIG work effectively at any given nursery. The staff must be dedicated to the idea of weather-based irrigation. Automated CIRRIG technology is not a “set and forget it” system like a traditional irrigation controller that is set manually. Staff must be dedicated to managing CIRRIG inputs and outputs on a daily basis as well as ensuring irrigation effectiveness by diligent monitoring of plants in the field. It is also important that the nursery have good IT support to troubleshoot networking and computer problems that can often arise during power outages or following irrigation system malfunctions.

PRODUCTION NOTES
On the production side, CIRRIG will be more effective if plants within irrigated areas have similar irrigation requirements; a nursery with diverse plantings within the same zone will not likely benefit greatly from CIRRIG. CIRRIG assumes the irrigation system provides relatively uniform delivery of water over the irrigated area and that application rates are consistent from one day to another. A container nursery that meets the above conditions and that is dedicated to irrigating efficiently might find that CIRRIG is a viable tool for implementing weather-based irrigation at the nursery.

* Financial support was provided by Southwest Florida Water Management District (project B291) and Florida Nursery, Growers and Landscape Association. Trade names are mentioned for informational purposes only and do not constitute an endorsement.

Jeff Million and Tom Yeager are with the Department of Environmental Horticulture, IFAS, University of Florida, Gainesville, Fla., 32611.