These individuals share the desire to invest in the community of Dauphin. They see a unique potential for an operation of this nature both from an economic perspective and from the point of view of “giving back” to the community. 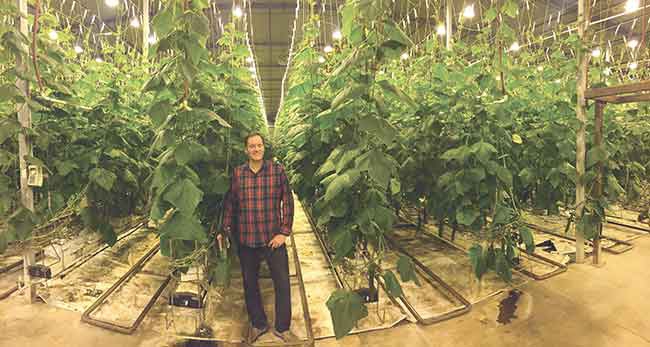 February 2016 — When Trevor Schriemer, grower/manager of Precision Produce Ltd., a three-acre cucumber and half-acre tomato operation in Otterburne, Manitoba, mentioned that a large greenhouse project is taking shape to be built in Dauphin, Manitoba, I was very excited to learn about this.

I view any new vegetable greenhouse development in Canada as an investment in increasing the supply of locally grown food, produce freshness and, of course, employment in the community. My first reaction was to wonder about water availability, climate, labour and who is going to invest in such a large project, along with what crops are to be grown.

My first thought was that it would be the first major vegetable greenhouse investment in Manitoba in quite some time. In 2013, the greenhouse vegetable industry there was estimated to be at about 4-1/2 acres, out of a total of about 73 acres of greenhouses in the province. The total sector, which includes bedding plants and ornamentals, generates $59 million in annual sales.

A group of individuals visited Precision Produce a few months ago for a tour of its cucumber facility. It quickly became apparent that they were interested in pursuing the possibility of doing something similar, though with tomatoes, in Dauphin.

Dauphin is located about 300 kilometres west of Winnipeg with good sunlight and temperature fluctuations typical of southern areas of the Prairies. Dauphin promotes itself as an agriculture and farming town with a population of just over 8,250 people.

Water is always my “first” question with such project proposals. It is not only the water quality for greenhouse use, but also the quantities available year-round, along with the microbiological contents such as total coliform and E. coli. The tests showed that the water is of good quality for tomato production, the supply is abundant for such a large project and that there is no coliform present.

Schriemer notes that a good business plan is the starting point for any business and especially for greenhouses.

Grace Raap, Trevor’s daughter, has experience with business planning, marketing and Canadian GAP, and this came in handy to prepare the feasibility and the business plan.

Besides having good market analysis, much research has gone into the development of this plan. The proponents are working with suppliers such as Westbrook and Zwart Systems, whose expertise and advice – along with input from Schriemer – helped with the development of the proposal.

As a result, it was decided that 30 acres of greenhouse would be constructed initially. Phase one will consist of a 10-acre facility, with subsequent stages to reach the 30-acre target. Construction will begin in May of this year, with completion in December.

Reaching a decision as to what type of structure is best suited for this kind of project in the Prairies is always a challenge. There are a number of questions. What type of heating system will be most efficient? What about using carbon dioxide from the boilers? Which water handling and treatment systems will work best? Is there a need for supplemental lighting systems? With Schriemer’s experience and knowledge, we were able to make decisions on such matters.

(Incidently, he achieved 67.9 kilograms of tomatoes/square-metre from his crop in 2015. This attests to his good crop management practices, knowledge and skills.)

With significant private investment, the Manitoba government is also fully supportive of this venture and local area First Nations people are very interested in the employment opportunities that will arise.

Lucky Deschauer, one of the principal investors, is a dynamic, vision-oriented individual. He and his sister Maria are the driving forces in this project.

“With Trevor Schriemer as senior grower and Dr. Mirza as a consultant, Lucky and Maria have assembled a team that is first-rate with a proven growing track record. Grace Raap prepared a detail business plan and feasibility,” notes a report on the project.  “It is our goal to supply Manitoba and Saskatchewan with all their tomato needs and future development will see the marketing of this product into the U.S.”

As mentioned before, the principal investors are visionary people who see development of the facility growing to 100 acres eventually. A lot of due diligence has gone into this project, and once completed it will add significant amounts of tomatoes into the western Canadian vegetable supply.

Dr. Mohyuddin Mirza is an industry consultant. He can be reached at drmirzaconsultants@gmail.com.