This award is scored and equally weighted after evaluations on service, responsiveness, as well as innovation and market competitiveness were submitted by A&W and its distributors. 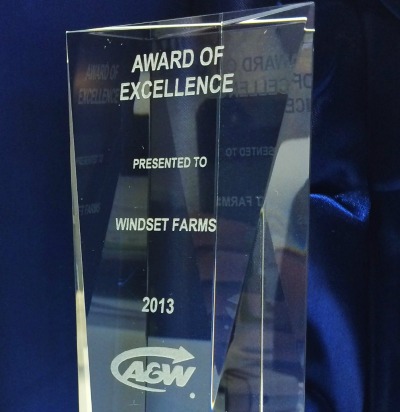 “We really appreciate the support and dedication the entire Windset team invests in the A&W produce program,” says Lisa Hughes, purchasing manager of Food and Food Science at A&W.

The restaurant was the first of its kind in the foodservice industry to choose greenhouse-grown tomatoes over traditional field product for its quality, consistency and food safety.

“The greenhouse-grown tomato program at A&W has been a huge success and it is an honour to be recognized by one of the leading foodservice restaurants in Canada who value sustainability as much as we do, “ said Windset Farms owner John Newell.

Windset uses 100 per cent non-GMO varieties in all their produce and was named World’s Best Tomato Grower in the first annual Tomato Inspiration Event held in Berlin earlier this year.

The Certified Greenhouse member has a 95 per cent water re-use rate, is carbon neutral and saves up to 40 per cent in energy savings using state-of-the- art technology such as thermal screens.

A&W Food Services is Canada’s second largest hamburger restaurant company with over 800 locations coast-to-coast. It is 100 per cent Canadian owned and one of the strongest brand names in the Canadian foodservice industry.

Headquartered at their Delta, B.C. facility and with greenhouses in Abbotsford, B.C., Santa Maria, California and Las Vegas, Nevada, Windset Farms is a family-run business that has become one of North America’s largest growers and marketers of greenhouse produce.