With a new gardening season quickly approaching, garden enthusiasts will be flocking to your garden centres across Canada for the next new thing.  Here are just a few plants that they’ll be looking for! 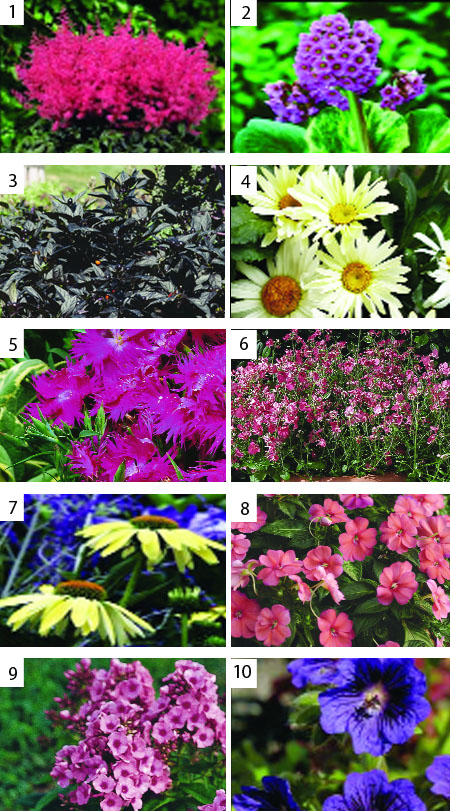 4. Broadway lights leucanthemum
Broadway Lights Leucanthemum is a breakthrough in breeding that gives a pale yellow flower instead of the basic white forms of this plant on the market.  Late spring to early summer flowering can be enhanced by cutting off flowers and allowing the plant to re-bloom. (Proven Winners)

5. Dianthus f1 ‘supra purple’
A deep purply-pink, ‘Supra Purple’ is one of the earliest Dianthus to bloom.  The petals are highly fringed, making for a lacy appearance to the flowers. (AAS)

7. Echinacea ‘Sunrise’
Soft, citron yellow, fragrant, daisy-like flowers are up to 12 cm across with a central cone that starts out green and quickly gives way to gold.  Flowers from July to September. (Vanhof & Blokker)

8. Fanfare®
The Fanfare series spreading impatiens are the most heat-tolerant impatiens on the market.  They spread like no other, forming lush plants that make a bold statement in garden beds, hanging baskets and containers. (Ball)

10. Geranium ‘Blue Blood’
By far the darkest midnight blue yet, with large flowers all over well-branched, airy plants.  Flowers are five centimetres across.  Flowers from June to July. (Vanhof & Blokker)