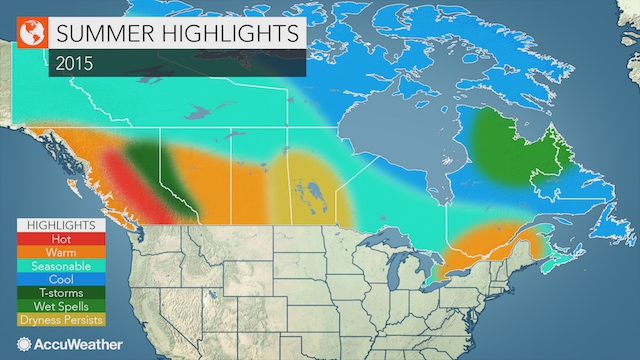 May 21, 2015 – AccuWeather reports the upcoming summer will be very warm across much of western and central Canada as the cool weather will be mostly confined to Atlantic Canada.

Dry conditions will persist into the summer across the valleys of south-central British Columbia and this will lead to an increase in spells of hot weather.

Off the west coast of British Columbia, the surface waters of the eastern Pacific will likely remain unusually warm, causing a warming influence in cities such as Vancouver and Victoria this summer.

The prevalence of very warm to hot weather across much of western Canada this upcoming summer will enhance afternoon thunderstorm activity over the Rockies, leading to an increased risk of flash flooding in areas, such as Banff National Park.

The unusually warm winter of 2014-2015 in western Canada likely resulted in the survival of a large population of the Pine Bark Beetle.

The beetle has been causing tremendous damage to the western forests, making them more susceptible to devastating wildfires. With more thunderstorms predicted in the mountains, the increase in dry lightning strikes will likely result in another active wildfire season.

Cities such as Edmonton and Calgary in Alberta along with Regina in Saskatchewan will also experience a higher number of days compared to normal that reach 32 degrees Celsius or higher.

Rainfall will be less than average across the eastern Prairies, including Winnipeg, Manitoba, this summer, as the bulk of heavier rainfall and thunderstorm events will be remain to the south and west.

WARM BUT COMFORTABLE OVER MUCH OF EASTERN CANADA

In the East, a dry flow of air from the west and northwest will dominate this summer from eastern Ontario, including Toronto, through southern Quebec and the Montreal area then into New Brunswick.

This pattern will result in cooler, more comfortable nights with lower humidity, while the afternoons will be warm with a higher number of days reaching 30 degrees Celsius or warmer, compared to normal.

The upcoming summer will be a cool one across a large portion of Atlantic Canada as several fronts from the far north will bring significant cooling to the region on a consistent basis.

The risk of a landfalling tropical storm or hurricane for the Maritimes will be lower compared to normal this upcoming season as the overall activity in the Atlantic will be reduced due in part to the strengthening El Niño.

Related
inside view: These investments yield major dividends
Something in the air?
Out of this world
Smarten up your farm with the Internet of Things