Growing in the cold: innovative new technologies are making cultivation of fresh fruit and vegetables truly feasible in the North. 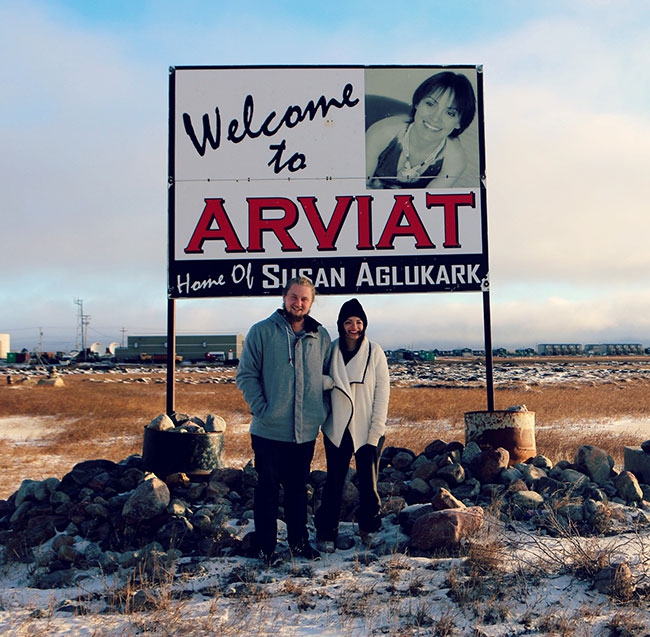 March April 2017 – The need to grow food in the North remains strong, and new high-tech innovations are on the cusp of making large amounts of local greenhouse-grown food a reality.

In Canada’s northern regions, fruit and vegetable prices have been extremely high for some time. Prices are at least three to four times those of Southern Canada, due to transportation costs and the small market size. Food security is also a strong concern.

A non-profit organization called “Growing North” (growfarnorth.com) claims that almost 80 per cent of Nunavut lives without food security. Read more on their project later in this feature.

Greenhouse food production in the North – already more established than you might think – is ramping up, with exceptionally innovative seasonal and year-round projects. While energy conservation is key at any time, it’s especially important now with the impending national carbon tax, and alternatives to diesel generators for heating are a must.

Before we get into specifics on designs and technology, let’s look at some 2016 large-scale northern greenhouse developments.

In addition, in March 2016, the first Northwest Territories CanGrow Greenhouse Technology Workshop was held at the Northern Farm Training Institute (NFTI) in Hay River, organized by the Aurora Research Institute.

ARI community research co-ordinator Jessica Dutton notes that greenhouses are a way for many established northern fruit and veggie growers to further diversify their operations. “Most greenhouse operators are more familiar with growing in soil than hydroponics, aquaponics or aeroponics systems,” she says, “so the workshop was a great opportunity to introduce new technologies.”

Attendees learned about “Titan Wall” insulated panels, developed in part by Professor Tang Gim Lee of the faculty of Environmental Design at the University of Calgary. The panels eliminate the need for framing, insulation and vapour barrier, and do not mould or rot. These characteristics make them extremely suitable for aquaponics operations, such as Lee’s Greenview Aqua-Farm in Calgary and at Forest Gate Greenhouse and Gardens in Fort Simpson, NWT.

Lee is a huge proponent of aquaponics for northern food production. “There’s a synergy there, and it’s almost a no-brainer, with the waste humidity, nutrients and heat,” he says. “Other countries have a nice climate year-round, but Canada doesn’t have that and this is a good way for Canada to be self-sufficient in terms of protein and greenhouse production.

“Fish have an incredible feed conversion – we have it down to 1.5 pounds of feed per pound of fish – the most efficient of any livestock. We have to farm more fish.”

Also at the workshop, Dr. Phalguni Mukhopadhyaya of the University of Victoria, B.C., introduced the prototype for his vacuum-sealed insulated panels. They have a thermal resistance value as much as three times greater than other types of insulation because a vacuum does not conduct any heat. However, the panels lose their effectiveness if damaged and they are also expensive.

ROTATING TOWERS
Dieter Krohmer, president of Advanced Technology Structures of Calgary, outlined his prototype closed environment structure made from extruded PVC bricks. The system includes the firm’s “Novo Green” towers that rotate so all plants get about the same amount of light exposure.

Dr. Samuel Mugo of MacEwen University in Edmonton discussed his work on reducing cellulose into extremely small particles called nanocellulose, which can be made into nanoporous hydrogel films that trap heat for root zone heating. The films can also store and release nutrients, water and pesticides.

Glen Scott of AgriArctic in Whitehorse talked about the “Agridome,” a converted intershelter dome (a type of northern survival structure) made from available construction materials, with vertical hydroponic growing towers, remote computer monitoring and HPS lamps, heated with a standard 1500W space heater.

Scott reports that a feasibility study on the dome completed with the Yukon Research Centre yielded “promising results.” Total average power expenditure over the course of the study was 1.9 kWhr and water usage was less than 1000 L/month for almost 800 plants.

In March of this year, the Agridome is being moved to Hay River, NWT, to support a “poultryponics” project, which (as you may have guessed) combines hydroponics and poultry production. It’s apparently the first project of its kind in the world.

AgriArctic is partnering with PolarEgg and Lethbridge College on the project. Waste plant material will be fed to the chickens (reducing the amount of feed required), and chicken manure will be treated in a bioreactor to produce fertilizer for the plants. The Agridome, where the vegetables will be grown, will sit on a hexagonal base structure where the chickens will be housed, and the chickens will have access to the outdoors in summer.

Inno-3B of Saint-Pacôme, Quebec, outlined its cutting-edge, closed, year-round growing system called the “Yield Factory.” The patent-pending tech converts “waste” photons from greenhouse lighting that is not used by plants into heat. The units are stackable and scalable.

Project Growing North is an Enactus Ryerson project that was launched in 2013. The goal is to help to tackle the need for fresh produce in northern Canadian communities while providing social entrepreneurship opportunities for local residents.

Their dome is 42 feet across, made from wood struts and metal hubs, and covered by polycarbonate glazing panels. It can withstand up to seven feet of snow and very high winds. In the summer, the dome can heat itself to over 30 C warmer than the temperature outside. Project manager Stefany Nieto says exploration into “green” winter heating options is ongoing. The setup is intended to grow about 20,000 pounds of a community’s choice of veggies and herbs in hydroponic towers supplied by Bright AgroTech.

North Star Agriculture in Whitehorse has partnered with Alberta-based NutraPonics to build an aquaponics facility this year. The venture has received an exemption from the Yukon government’s current ban on fish farming, and will be working with the territory to create fish farming regulations.

North Star CEO Sonny Gray says they are currently securing funding and relationships with other entities such as First Nations development corporations. He is not sure what heat source will be used, but mentions geothermal and solar as possibilities.

Professor Mike Dixon of the University of Guelph’s Controlled Environment Systems Research Facility is planning to head a year-round pilot project in Hay River in collaboration with NFTI.

Dixon is the foremost Canadian expert on greenhouse systems for harsh environments, from future off-planet settlements to the North. “The insulated unit is already in place,” he explains, “but we need all the systems – lights, hydroponics, controls and so on – purchased and installed.”

“During times of the year with high light intensity, high transmission is allowed through a quad-pane polycarbonate glazing (R-4),” the report states. “During the shoulder season, supplemental lighting is provided by LEDs. Insulated shading (R-26) is used during the cold, low-light winter months as LEDs become the primary source of lighting. The heavily insulated chamber is heated through in-bed heating, and under-bed water reserves as a thermal storage.”

The low-cost CING (Canadian Integrated Northern Greenhouse) is another example of a hybrid summer greenhouse/winter growth chamber design, presented at the workshop by Dr. Mark Lefsrud of McGill University.

CING consists of a shipping container with clear polycarbonate panels on top and on one side, with rigid foam on the other three sides. Retractable covers retain heat and supplemental light comes from LEDs. “A radiant insulation blanket covers the glazed side in winter along with steel shutters,” the report states. “External air is passed through a heat exchanger chamber, [and] a nutrient-free water tank functions as a condenser for moisture buildup and temperature moderation.”

In such a cold environment as Canada’s north, there are many challenges to greenhouse food production, but as you can see, there are no shortage of ideas and new technologies. While Dutton and her colleagues point out that it might be best to keep the northern greenhouse tech simple at this point in order not to alienate potential growers, they also note that as the agricultural community develops and diversifies, “there may be growers who have the skills and interest to expand into higher tech growing.” It seems they may be right.