Features Screens Structures & Equipment
The Many Benefits Of Double Screening

It’s the right formula for success at Ontario’s NatureFresh Farms, offering an optimal summer growth climate along with added energy savings in winter. 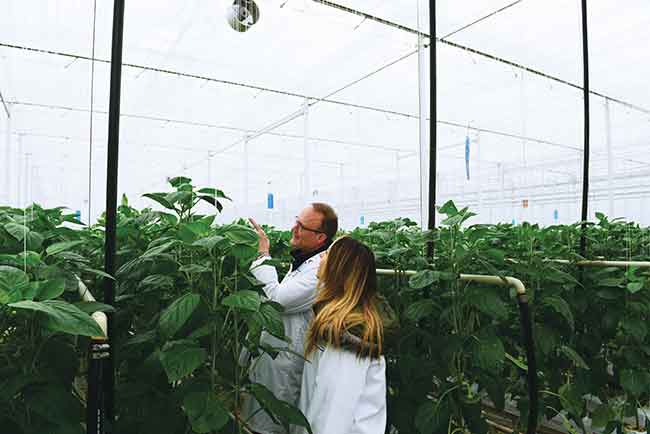 June 2016 – Weary of yearly whitewashing to protect their peppers from sunburn, Ontario’s NatureFresh™ Farms went in search of a more efficient option. They found the answer in double screening, a technique that European growers have been using with great success for years, but which is still relatively new to North America.

After a side-by-side trial comparing double screening in one six-hectare section to another section with standard whitewashing, the results were so compelling that they’re currently installing the system on another six hectares, with the potential for more.

“Right away we noticed plant temperatures and greenhouse temperatures with double screening were cooler compared to the other section,” says head grower Herman Fehr.

Plant temperature is vital for NatureFresh, one of the largest greenhouse pepper growers in North America. At their Leamington location alone, they’re operating 12 hectares of glasshouse producing green, red, orange and yellow peppers.

But until the double curtain installation in early 2015, they weren’t using light effectively, and Fehr’s suspicion was that they could be getting more from their plants.

“With this system our plants are growing more generative – and we’re not afraid of sunburned peppers,” he explains. “The idea was to only shade when the sun is at its strongest peaks, and not on cloudy days.”

During the cold Leamington winters, when temperatures commonly drop to -12 C, the transparent Luxous screen ensures a reasonable energy input and an ideal microclimate for plants. The screen is closed throughout the night and often during much of the day. NatureFresh typically opens it at sun radiation levels of 300-400 W/m2 on cold winter days. The “clear as glass” property of the Luxous energy screen allows for daytime usage.

Home to temperature extremes at both ends of the scale, Leamington pairs very cold winters with spring and summer days that are often hot and sun-intense, necessitating protection for pepper crops to prevent plant temperatures from reaching too high.

To solve this challenge, NatureFresh chose an open light diffusing Harmony shade that provides 25 per cent shading in direct light while also offering a high degree of diffused light in the greenhouse.

DEBUNKING CONVENTIONAL WISDOM
In the portion of the glasshouse without the double curtain system, operations went on as usual. “Every year we were applying a light diffusing coating on the glass and losing light in the morning and evening and on cloudy days,” says Fehr.

The process comes with limitations, he explains. It has to be at least 10 C outside to be able to apply the coating on the roof – and that doesn’t come very often in March in Leamington.

“In March we have very bright days, and we can’t close the energy screen because it doesn’t have enough airflow,” Fehr says. “We can utilize this system a bit earlier than you can a whitewash.”

The NatureFresh trial has debunked conventional wisdom on several levels. While not proven, the perception was that whitewashing was more effective than using a shade screen. But this fixed solution has its limitations. For example, if two weeks of cloudy days follow after painting, it’s not efficient to remove the coating to get more light. “So, you’re sacrificing extra yield with a fixed coating solution,” says Svensson’s Mauricio Manotas.

SIDE-BY-SIDE COMPARISON
NatureFresh compared the climate in the double screened section to another section of the same greenhouse equipped with light-diffusive paint on the roof and no shade screen installed. They found that during summer days in the section with the mobile Harmony screen, the crop received more cumulative light and temperatures were lower.

“On hot sunny days, plants were about two degrees cooler with Harmony,” says Fehr. “We were very impressed that we were able to keep a lower plant temperature.”

Fehr was also very pleased that the light-diffusing screen could be fully closed, shielding the entire crop from intense sun radiation. “We feared there would not be enough air exchange but that wasn’t a problem,” he says.

Another unexpected benefit: the ability to close both screens, which resulted in 4 C lower pipe temperatures compared to the reference section that was equipped with only the energy screen.

Says Manotas: “The bottom line is, you can have the same cooling effect using a shade screen that you can with whitewash – plus you receive several hours of extra light each day.”

Joli A. Hohenstein is a marketing and PR specialist for Pen & Petal, Inc., a marketing, advertising and public relations agency for the green industry. She can be reached at joli@penandpetal.com or 217-454-0542.

Related
Which Shading Is The Winner in Florida Trials?
Inside View and benefits of screening
OPTIMIZING Use of Your Curtains
Putting on your summer shades