July 4, 2013, Vancouver — Farmers’ markets contribute significantly to
the local economy, injecting nearly $170 million annually, according to a
recent social and economic benefits study by the B.C. Association of
Farmers’ Markets (BCAFM) and Dr. David Connell of the University of
Northern British Columbia (UNBC).

July 4, 2013, Vancouver — Farmers’ markets contribute significantly to the local economy, injecting nearly $170 million annually, according to a recent social and economic benefits study by the B.C. Association of Farmers’ Markets (BCAFM) and Dr. David Connell of the University of Northern British Columbia (UNBC).

Farmers’ markets are now in full swing throughout British Columbia. 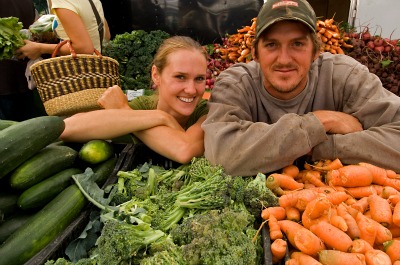 “Although people know that farmers’ markets are a great place to buy fresh, local food,” said Jon Bell, president of the BCAFM, “the results of this study demonstrate the incredible growth of markets since 2006 when we supported a similar study.”

“This project builds upon the results of a similar study we did in 2006,” said Connell.

“The results are significant for many reasons. They highlight the improving viability of local food systems, increasing demand for new farmers, and pressing need to protect the agricultural land base.”

More people are shopping at markets: there’s been a 62 per cent increase in the number of markets and shoppers are spending more money.

Over 9,800 people participated in the study at 33 farmers’ markets across British Columbia. Over half of the market visitors shop at the market at least two to three times a month.

With a loyal customer base, farmers and vendors are finding the stability they need with this marketing channel. Additionally, 20 per cent of market shoppers are first time visitors showing that markets are reaching a new customer base.

“Farmers’ markets continue to serve as the face of agriculture in B.C.,” said Elizabeth Quinn, executive director of the BCAFM.

“There has been significant growth in the number and vitality of farmers’ markets in B.C. and it is important to understand not only what they contribute but also how much they contribute to local neighbourhoods, cities and towns,” she explained.

The five most important factors that farmers’ market shoppers consider when buying food include nutritional content, grown/produced in B.C. or locally, in season, and animal welfare.

The project was carried out by the BCAFM in collaboration with Dr. David Connell, a professor in the School of Environmental Planning at the University of Northern British Columbia.

Click here for a full copy of the Provincial Report on the Economic and Social Benefits Assessment of B.C. Farmers’ Markets.

Click here for more information on the BCAFM or to find a farmers’ market near you.