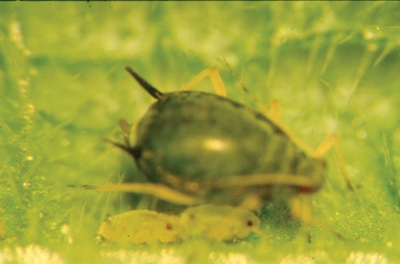 Cotton aphid showing characteristic black cornicles, or “exhaust pipes,” on either side of the tail end of its body. Photos Courtesy Gillian Ferguson/OMAFRA

As the fall approaches, cucumber growers have to be on the alert for aphids and the dreaded viruses they vector.

Aphids tend to become more prevalent in greenhouses during the fall because of the production of winged females on outdoor crops. These females migrate to overwintering hosts such as peaches, and also into greenhouses that are a source of warmth and food.

Such aphids are potential sources of viruses if they have fed on any infected outdoor crops or weeds. Of the numerous viruses that aphids vector in cucumbers, cucumber mosaic virus (CMV) is perhaps the most commonly occurring one. Melon aphids or cotton aphids (Aphis gossypii), also the most commonly occurring aphid species in cucumbers, can acquire cucumber mosaic virus (CMV) while feeding for five minutes on an infected host, and can transmit it within the next five minutes while feeding on a healthy plant. The length of time during which an aphid remains infected can vary from one to several hours. Once a plant becomes infected, the virus can then be spread to other plants mechanically, i.e., by contaminated knives or fingers coming into contact with wounds of neighbouring plants.

GOOD SANITATION PART OF STANDARD CMW STRATEGIES
The usual strategies for managing CMV include suppression of aphid populations, carrying out good sanitation practices, and restricting movement of workers within the crop. However, in addition to these measures, work done some years ago in the Netherlands suggests that manipulation of temperature can greatly influence the economic impact of CMV in greenhouse cucumbers.

In a trial carried out at the Experiment Station in Naaldwijk in two glasshouses planted with cucumbers on Aug. 22, the minimum temperature in one glasshouse was kept at 15°C, and in the other at 21°C. Plants in both houses were inoculated with CMV at two different times, either Sept. 16 or Sept. 30. Each treatment consisted of 20 plants in two replications.

Results of this trial indicate the importance of maintaining a warm minimum in CMV-infected cucumbers if the effects of CMV are to be minimized. There will likely be the inclination to keep cooler minimum temperatures during the approaching cooler months to save on energy costs. However, the savings from maintaining lower minimum temperatures have to be weighed against the potential losses due to CMV.
Gillian Ferguson is the greenhouse vegetable IPM specialist with the Ontario Ministry of Agriculture, Food and Rural Affairs in Harrow, Ontario.
Gillian.ferguson@ontario.ca


Related
A ‘greener’ greenhouse: In addition to fuel bill savings, there may be some tax breaks
Inside View: June 2010
Energy matters #4: Hire a contractor … or DIY?
OFA, and the need for green energy promotion