Cut gerbera’s many qualities make it an ideal crop for biocontrol. The problem? Insects, mites and diseases love this crop too. 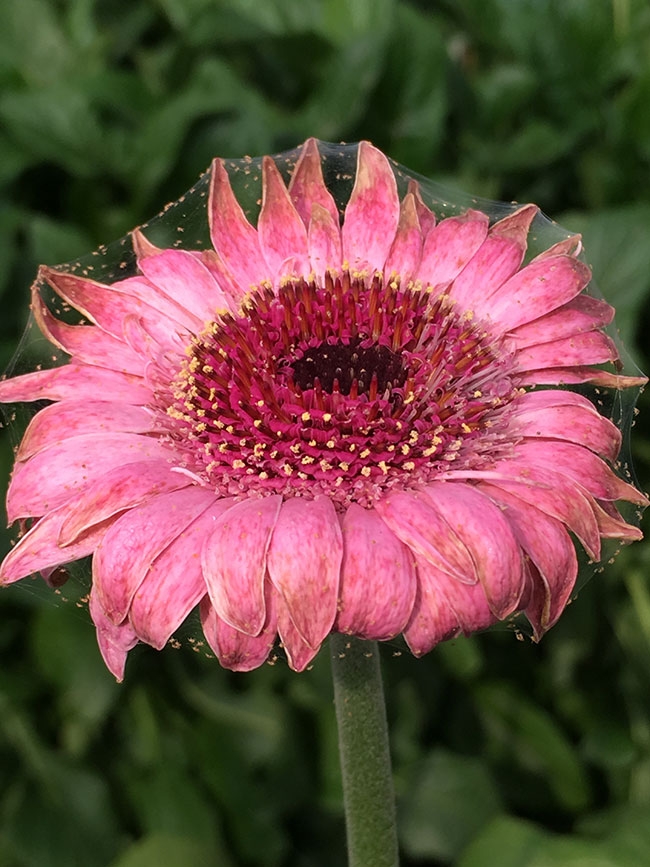 Biological control in greenhouse ornamental crops has become more mainstream in the past 10 years and one of the crops that has led the way has been cut gerbera.

Gerbera grown for cut flowers has many qualities that make it the poster child for biocontrol in ornamentals:

– Perennial crop – it remains in the greenhouse for two to three years (longer for some varieties). This allows plenty of opportunity and time for biocontrol populations to establish
– Great environment – the dense canopy provides an ideal environment for natural enemies
– Bridging canopy – and the overlapping foliage between adjacent plants allows biocontrol agents such as predatory mites a perfect pathway to move along the length of each bed
– Greater tolerance for pests – cut gerbera are one of the few ornamental plants where none of the foliage is sold, so there is some tolerance for low levels of foliar pests (within reason), as long as the flowers are not directly (or indirectly as a result of reduced photosynthesis) affected

The problem is that pests (insects, mites and diseases) love gerbera. Here is a quick rundown of the major pest problems:

Whitefly
In Ontario, greenhouse whitefly (GWF) is the most common species, although I have occasionally seen small infestations of Bemisia. The life cycle of GWF is fairly long compared to other pests like mites or thrips, but the perennial nature of the crop allows plenty of time for populations to build up. It is mainly a foliar pest and can result in significant loss of production.

Chemical control can be problematic due to resistance. Some newer pesticides may give control, but the bigger issue is the impact they can have on biocontrol of other pests, for which there are no effective pesticide options (e.g. leafminer, thrips).

There is an excellent suite of biocontrol agents (BCAs) available for control of greenhouse whitefly. These include the parasitic wasps, Encarsia and Eretmocerus, the ladybeetle Delphastus, and predatory mites such as Amblyseius swirskii and Amblydromalus limonicus. Delphastus in particular can produce spectacular results in reducing a large population when it gets established. Biocontrol can be excellent in the spring, summer and early fall, but in late fall and winter, the ability of the BCAs to keep up with the development of the whitefly is greatly reduced and growers often have to play catch up in the spring.

There is some potential for products like fresh Encarsia which is active at lower temperatures than stored product, and A. limonicus which is also active at cool temperatures, to maintain control of the whitefly during the winter months.

Leafminer
In some ways, leafminer is similar to whitefly in that it is primarily a foliar pest capable of massive population build up. Production can be severely impacted because of reductions in photosynthesis as a result of the leaf mining (Figure 2).

In Canada, there are only three pesticides registered for control of leafminer and all show high levels of resistance. There are some newer pesticides that show potential for control, but are not yet registered.

Biological control is the preferred control strategy for most growers. The parasitic wasp Diglyphus, is the most effective BCA, and my favourite BCA to work with. It establishes easily, and even with a hand lens, the immature wasps can be easily seen inside the mines. Many growers bring in low levels of Diglyphus on a regular basis as a preventative measure, even if leafminers are not present in the greenhouse. However, they are very sensitive to pesticides and control is often disrupted if growers have to spray for other pests. Even some fungicides can compromise biocontrol with Diglyphus.

Spider mites
Spider mites are not in the same category as the two previous pests, but they can be devastating on almost any crop if left uncontrolled, and the same is true of gerbera. There can be varietal differences in susceptibility to mites and the heavy webbing that mites can produce can quickly render flowers unsaleable (Figure 1).

Aphids
Aphids fall into a similar category to spider mites. Populations can build up very quickly and the insects can infest foliage and flowers (Figure 3). Their presence on flowers is the most significant problem with this pest. Green peach aphid is the most common species of concern, but occasionally foxglove aphid can also be a problem.

There are a number of BCAs available for aphid control including Aphidius wasps (different species depending on the species of aphid), the predatory midge Aphidoletes (it diapauses in the winter so it is only effective from early spring until fall), and lacewings.

There is also a compatible pesticide Beleaf (flonicamid) which is reasonably safe on most BCAs and can be an effective ‘get out of jail’ card if required.

Thrips
Western flower thrips (WFT) is an interesting pest in gerbera. In potted plant production, they can be devastating, but less so in gerbera grown for cut flowers, probably because the flowers are sold fairly tight before there is a large quantity of pollen showing. WFT love pollen and in potted production, the first flower is often quite mature and showing significant pollen before the plant is shipped. However, there are still some situations in cut gerbera where thrips are a major problem, especially where there is a large population build up outside that can move into the greenhouse and cause significant damage.

The other thrips species of concern is Echinothrips, which has become more important as a pest in the last five to 10 years. It is a foliar pest and is not usually found in the flowers, but it can develop into large populations.

There are some very effective biocontrol options for WFT, especially the predatory mites such A. swirskii and N. cucumeris. The gerbera canopy provides an ideal environment for these mites to establish and spread from plant to plant. There are fewer options for Echinothrips. The above predators are not effective, but the mite A. limonicus shows some potential, although it is quite expensive. The predatory bug Dicyphus also has the potential to be an effective predator of Echinothrips, although there is not much research or field experience with these products. Microbial pesticides such as BotaniGard or Met 52 can also provide some control. Traditional pesticides will control Echinothrips, but can interfere with biocontrol of other pests.

Mealybugs
One of the most destructive pests and difficult to control in cut gerbera is mealybugs. Fortunately, we don’t often see them as a pest, but when it does happen, it is critical to get control of them as soon as possible. Saying it like that makes it sound easy, but that is far from the case. Very few pesticides work well and if they do, they will probably cause major problems with the rest of the biocontrol program. Mineral oil is reasonably effective but may damage the flowers (and the rest of the plant), especially with repeated applications. Beleaf may provide some control, but it is unlikely to reduce the populations to acceptable levels.

In a potted crop, my recommendation is usually to throw out any infested pots that are found. That’s not as easy with a two to three year crop grown for cut flowers. However, if found early, drastic measures such as this may be the most effective (and economic) option.

The most readily available biocontrol agent for mealybugs is the ladybeetle Cryptolaemus but that can be difficult to establish. One Ontario grower with a severe problem eventually gained control with this natural enemy by introducing larval beetles (rather than adults) into infested areas. It was a long slow process, but it showed that it can be done.

Caterpillars
Caterpillars are not often a problem and not usually as severe as shown in Figure 4 which was caused by cutworms.

Fortunately, there are several compatible pesticides including products such as DiPel and Confirm which are very effective and won’t interfere with other biocontrol systems in the greenhouse.

Powdery mildew
Pests should not just be thought of as insects and mites. Diseases such as powdery mildew (Figure 5) can be just as devastating and can have a major impact on other parts of the biocontrol program, especially during the shoulder seasons of spring and fall.

Excessive use of fungicides can affect plant growth and products such as sulphur can have a negative effect on many of the biocontrol agents. There is a certain level of tolerance with many of the BCAs to sulphur but if applied too frequently or for too many hours during the night, it can be damaging.

Environmental controls should be considered as a first line of defence to keep night-time humidity levels down and reduce large humidity fluctuations between day and night.

Root diseases
Phytophthora, Pythium and Fusarium can all be problematic, especially in recirculating systems. Water treatment of return water in such systems is essential, because if disease becomes established it can be very difficult to get rid of.

Fungicides may help, but for pathogens like Fusarium, even fungicides provide limited control and can compromise biocontrol programs.

Graeme Murphy is the IPM specialist at bioLogical control solutions. He can be reached at graeme.murphy307@gmail.com.
Print this page