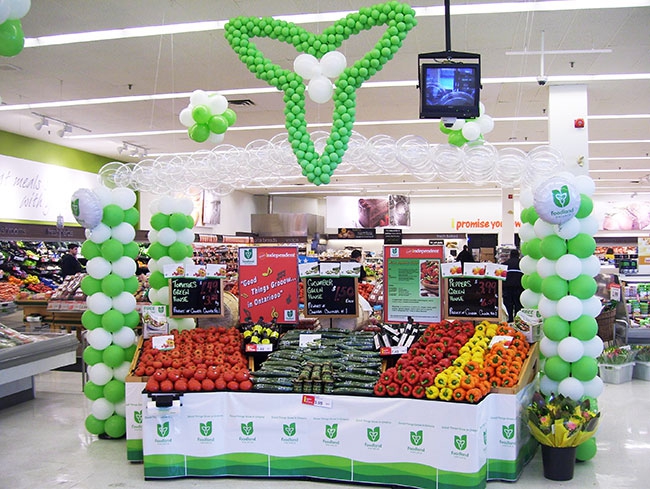 Stores are enthusiastic about the growing “Buy Local” movement. This is a winner from this year’s Foodland Ontario Retailer Awards program. Photo courtesy OMAFRA

May 2015 – There’s a lot of confidence in the industry, according to our 2015 Grower Survey. Profits are higher and prices are rising.

It was another strong year for growers in our survey, with 64 per cent pointing to improved sales compared to 2013, including 30 per cent who reported gains of between five and 10 per cent.

(All numbers are rounded off in this report.)

As for sales forecasts for this year, the growers in our survey are not quite as confident in major gains as they were last year. This year:

Natural gas remains the most popular fuel with 55 per cent (50), followed by propane with 13 per cent (14), wood with 10 per cent (nine), oil with eight per cent (10), and renewables with five per cent (three). Some nine per cent of respondents have no heating system (11).

Some 80 per cent of growers are not anticipating any increase in staffing this year, while 14 per cent are expecting payroll numbers to rise by up to 10 per cent. About three per cent will be increasing employment levels by more than 10 per cent.

There was a little less investment (by the number of growers) in new equipment/technology in 2014 compared to 2013.

On the question of “business threats within the coming three to five years,” the ranking was as following, beginning at the top and with last year’s rankings in brackets:

Here’s how our respondents viewed each specific threat:

We received a wide range of comments from respondents.

“We’re getting older and have no one who is interested in carrying on the business. We’re hoping to keep it going for another 10 years, but our health will determine whether that’s possible.”

“The cost of fuel. It represents 20 per cent of our expenses.”

“No one to follow up to continue the business.”

“The weather can dampen consumer enthusiasm.”

“The whole issue of water, including its acquisition, the disposal of post-irrigation water, and rain water collection.”

“We are a discretionary household expense. The average family has more choices but less money to spend. Keeping floral purchases popular will be a challenge.”

“The challenge in our area is that there were once three greenhouses around us and all have closed. We do not want to get bigger, nor hire more people. We are happy with the size we are. We believe that being the only greenhouse around here will put a lot of pressure on us to produce more, to have more availability.”

Stores are enthusiastic about the growing “Buy Local” movement. This is a winner from this year’s Foodland Ontario Retailer Awards program.

“Management is aging, and the business is growing to the point where a new management structure is needed.”

“Being a small grower and not getting volume breaks.”

“Competitors not raising their prices and an oversupply of perennials into the wholesale market.”

“What will happen with the rising minimum wage?”

Here’s how growers ranked business opportunities in the coming three to five years, with rankings from our last survey in brackets.

And here’s a closer look at their responses for each option:

It was largely a big thumbs down for “Export Markets,” as 71 per cent said they don’t see them as an opportunity. However, 24 per cent did say they were “somewhat” impressed with their potential. Only five per cent are “very” keen on expanding into exports.

Here’s a sampling of responses from growers assessing potential opportunities:

“We are a retail greenhouse, so additional areas of growth are in non-horticultural areas.”

“Buy Local. We’re one of the few growers in the Muskoka Region.”

“More retail via the Internet.”

“We are a comfortable family business and don’t want to grow any larger.”

“Expanding the market season to include the Christmas market.”

“Staying ahead of everyone else with new products, or the same product in different sizes and in full colour later in the season (such as July, August and September).”

PEST PRESSURES
Looking back at pest pressures in 2014, here are our growers’ experiences, with responses from last year’s survey in brackets:

DISEASE PROBLEMS
And here’s what our survey recorded about disease pressures. 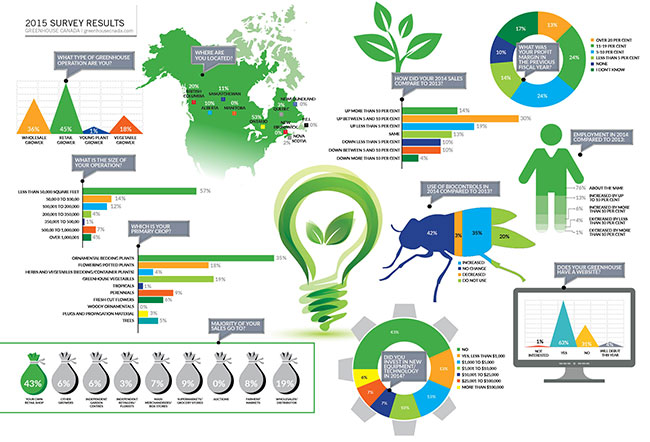