Features Business Trends
Succulents: Here are All the Juicy Details

Hardy or tender, succulents are insanely popular. Their 15 minutes of fame has stretched into years – with no end in sight. 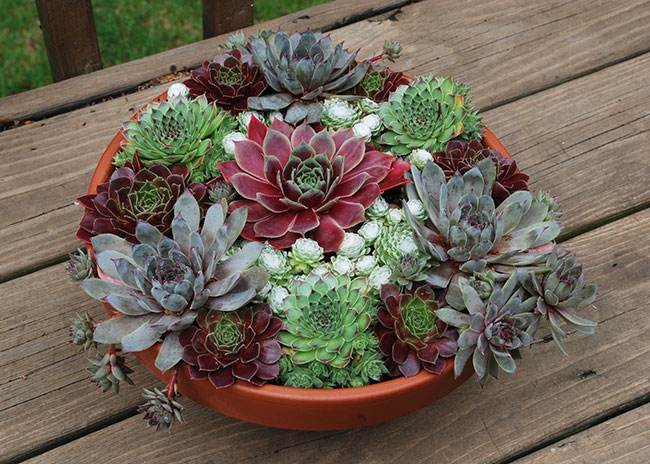 The new Chick Charms® series of Sempervivum from Chris Hansen touts succulents as a collectors’ dream.

December 2016 – Need evidence that succulent plants are hot? Here’s some. In recent months, I was invited to speak on succulents at a fruit and vegetable convention, and to a local herb guild. Can you name two industry segments less likely to give a Rhipsalis about such stuff?

Succulents are everywhere: garden centres, public and private gardens, even boutiques that stock no other plants. Their low-maintenance lifestyle makes them equally at home from windowsill to rock garden, from eight-centimetre (3-inch) pots to multi-acre green roofs.

This is no fad, not the Pet Rock of horticulture. But they have this in common with rocks: they’re hard to kill. Sedum is called “stonecrop.” Sempervivum means “Live forever.” Agave is called “century plant.”

People like plants they can ignore. If you leave for two weeks and nobody waters your houseplants, even your Swedish ivy will die. But your kalanchoe and crassula will barely notice you’re not there. Outdoors, if drought hits and watering is banned, your sedums and sempervivums will be green islands in a brown sea.

Defining characteristics are a waxy epidermis, fewer and smaller pores than most plants, and mucilaginous sap. Succulents are built to suck up all the water they can hold, and hold it.

There are three principal hardy succulent genera. Sedum, a.k.a. stonecrop, is the big one. Hundreds of varieties are on the market. Some of the best breeding I’ve seen is by Terra Nova Nurseries. They’re known for their heuchera too, but their sedum genetics are world-class. Intrinsic Perennial Gardens in Illinois has also produced some cool varieties. And Chris Hansen’s SunSparkler® series has exciting colours and forms. Low-growing sedum varieties are the go-to living ingredient in green roofs, which cover everything from bird feeders to convention centres – a topic unto itself.

Next in importance comes sempervivum, hen and chicks, or houseleeks. A new series, Chick Charms®, from Chris Hansen, breathes new life into the genus. As with his sedum intros, the collection features hitherto-unseen colours and novel forms. Little Prince of Oregon Nursery has staked out a cool niche with sempervivum in creative combos, marketed as “Water Misers®.”

Sedum and sempervivum are the only genera that Emerald Coast Growers offers in mixed trays. Small- to medium-size growers need a good selection but balk at buying hundreds of plants.

Delosperma, a.k.a. ice plant, is a South African native that grows at high altitudes. Recent breeding has resulted in two nifty series, Jewel of Desert and Wheels of Wonder®, each with a wide range of colourful flowers. Check YouTube for some fun marketing featuring Peter Van Reisen of Concept Plants.

The new Chick Charms® series of Sempervivum from Chris Hansen touts succulents as a collectors’ dream.

In tender succulents, echeveria is the workhorse genus. Some strongly resemble sempervivum, and both are called “hen and chicks,” but there are significant differences. Echeveria, native to Mexico and South America, is hardy in Zones 9-11. Sempervivum is extremely hardy, down to Zone 3. Echeveria doesn’t die after flowering. In sempervivum, the “hen” blooms and then dies out, leaving the offshoots, the “chicks,” to carry on.

Other key genera: crassula, the jade plant; aloe, with many decorative species besides the classic A. vera; kalanchoe, in sizes ranging from teacup to 41 centimetres  (16-inch) cut flower stems; senecio; and even a tender sedum, S. morganianum, a.k.a. “burro’s tail.”

Brilliant marketing, or crime against nature? The “value-added” trick of offering succulents in hues God never contemplated started overseas. But the practice has made landfall in the U.S., where colour-enhanced echeveria are even turning up in brides’ bouquets.

If there’s anything else as hot as succulents, it’s pollinator-friendly gardening. They intersect at sedum. Bees LOVE sedum, especially big-flowering spectabile types.

You want natives with that? Native to eastern North America and hardy to Zone 3, Sedum ternatum is just 15 centimetres (6 inches) tall. Unlike most, it likes shade. Good luck sourcing it, though.

Hardy or tender, succulents are insanely popular. Their 15 minutes of fame has stretched into years – with no end in sight. Get juiced!