Just announced on June 6, but rumoured for several weeks – in fact for
years – the retail garden sector has gained another fierce competitor
when U.S.-based Lowe’s home improvements announced it would open its
first Canadian store in Toronto in 2007. 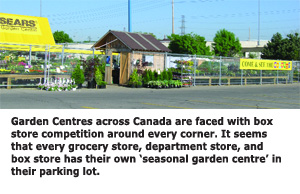 Just announced on June 6, but rumoured for several weeks – in fact for years – the retail garden sector has gained another fierce competitor when U.S.-based Lowe’s home improvements announced it would open its first Canadian store in Toronto in 2007. In fact its plans call for six to ten new stores in the Toronto area by 2007. A Canadian president, Doug Robinson, has already been announced. If anything, this expansion was likely brought about by the brilliant showing Home Depot has had in Canada in the last decade, under the leadership of Annette Verschuren, president. Home Depot has tried out many new ideas here in Canada – some not yet fully implemented in the U.S.

I chatted with Nick Cowling, PR director for Home Depot in Toronto, who says the decision to move north may well have resulted from shareholder pressure on top management to expand beyond the company’s 1,100 U.S. stores. He pointed out that while press reports were speculating that a group of real estate advisers had already selected a large number of potential sites, it may well be difficult for Lowe’s to locate good sites for new stores. “After all, if the site is that good, we would be there now,” says Nick. We also discussed some of the challenges that both Home Depot and other big box stores have faced in trying to open a store.

Meanwhile in Scarborough’s Home Depot head office, they are hard at work with 18 new store openings this year. As well, they now have a third version. In the last two years they have opened a smaller store version, using just 80,000 square feet and now plan a 60,000 square feet version.
A significant factor is that the Canadian market is vastly different than that in the U.S. Down there, they do not have anything like the national chain of Canadian Tire stores, nor anything like the national chain of independently owned Home Hardware stores.

The one thing I predict is much greater competition for garden centers – if in doubt just ask Ron MacLean who was president of White Rose Crafts & Nursery Sales Ltd. when things started going bad;  one prime reason was the infiltration of the big box stores. And now there will be another one!