The Goal is to Help Plants Flower Faster for Sales to Consumers. 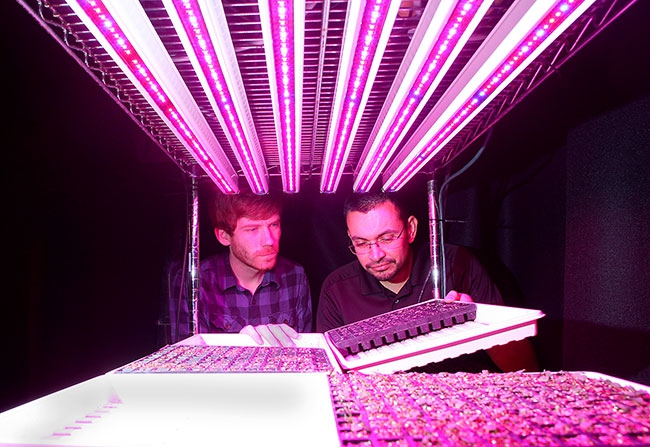 Purdue University researchers’ success in using red and blue LEDs as the only source of light to grow ornamental plant seedlings indoors has led to a new phase of determining whether they can reduce production time with more colours.

The research is important because most seedlings are grown in greenhouses in the late winter and early spring, a time when sunlight with enough growing power is low, especially in northern states.

Seedlings need to grow at that time to meet spring and summer sales of bedding plants, so supplemental lighting from electric lamps is typically needed.

They found that the quality of seedlings grown with LEDs was similar to – and in some cases better than – those grown in a greenhouse with high-pressure sodium lamps (similar to street or arena lamps) to supplement sunlight.

They then decided to see if the seedlings could be produced indoors with LEDs as the sole source of light.

“It was quite surprising to see how uniform, compact and sturdy the seedlings were compared to seedlings produced in the greenhouse with sunlight and supplemental lighting from LEDs,” Lopez said.

Compact seedlings are desirable because tall seedlings can be damaged in boxes during shipping. “I didn’t think we could produce such a nice, high-quality plant without the sun,” he said.

The greenhouse study was published in HortScience, a publication of the American Society for Horticulture Science. The researchers also wrote about the sole-source LED lighting study in Greenhouse Product News last September.

Lopez said the research shows that sole-source LED lighting could be used to grow ornamental plant seedlings indoors with a technique known as multilayer production, in which plants are stacked on top of each other on shelves such as in a warehouse where there is no sunlight.

Some companies, especially in Japan, already use multilayer production for leafy vegetables.

High-intensity LEDs, with their red and blue colours resembling Christmas lights, convert electricity into light that plants use for photosynthesis. They are much more efficient than traditional lights such as incandescent bulbs and fluorescent lights because they consume less energy. They last longer, too, but they also are more expensive to buy.

The current research led by Lopez and doctoral student Joshua Craver has advanced to the stage of trying to make the seedlings grow faster than the typical three to four weeks in a greenhouse, using red, blue, white and far-red LEDs. Growing time was not considered in the first phase of the research.

“We want to see if we can take a week or so off of production,” Lopez said.

The goal, he said, is to help the plants flower faster for sale to consumers.

The research is part of a four-year grant by the U.S. Department of Agriculture for research involving growing both ornamental and vegetable plants with LED lights.

Keith Robinson is a communications specialist with Purdue University.