Ontario ag minister set the tone on first day: “Yours is a very important sector of Ontario’s agricultural economy,” a key component in a $34-billion industry. 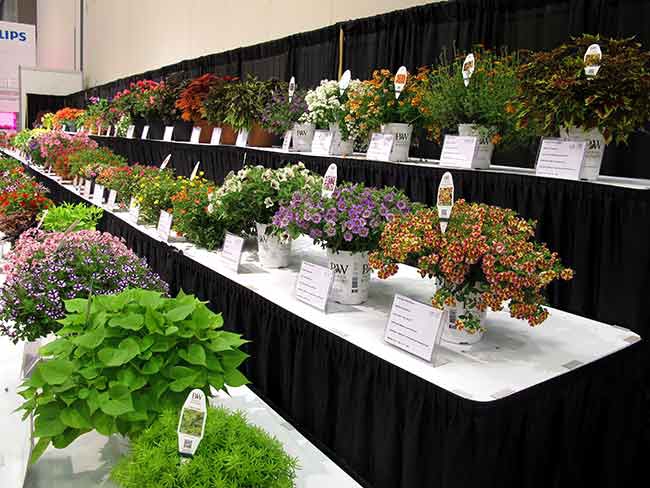 Part of the New Varieties display.

January 2016 — The 2015 edition of the Canadian Greenhouse Conference in Niagara Falls featured an extended bus tour, a soldout trade show, a standing room only crowd for a pair of medical cannabis seminars, and a visit by Ontario’s agriculture minister.

In short, a total success.

“Yours is a very important sector of Ontario’s agricultural economy,” said Jeff Leal, Ontario’s minister of agriculture, food and rural development. He was the special guest at the opening day reception.

Leal has worked closely with the greenhouse sector. Last April, he invited George Gilvesy of the Ontario Greenhouse Vegetable Growers to participate in a trade mission to China. Gilvesy was then the general manager of the OGVG before stepping down this past summer. He has since been appointed chair of the OGVG board by the Ontario Farm Products Marketing Commission.

Continuing with his industry update, Leal noted that three vacancies have been filled within the ranks of OMAFRA greenhouse specialists, and that the government is working to extend natural gas infrastructure throughout the province.

Things were on a roll even before the conference started, as the pre-conference bus tour travelled to the Leamington region. This year’s focus was on automation and recycling.

The automation was showcased by vegetable growers Golden Acre Farms and Mucci Farms, both of Kingsville.

Louis Chibante of Golden Acre led the tour of one of his facilities that features high-wire cucumber production without lights. He was the first grower in North America to adopt such a system, and he’s quite impressed with the results in quality and yields.

The packing line is completely automated, including the crate dumping and stacking system, the grading unit and packaging line, and the shipping area. Aside from the employee who harvests the cucumber, the next person to touch it will be the consumer.

A longtime adopter of new technologies, Chibante does his homework. “Before we jump into anything, we do a lot of R&D.”

They’re now studying supplemental HPS and LED lighting systems. With current pricing, Chibante gives the edge to HPS. But in addition to price, the HPS systems also produce heat, and that comes in handy during southwestern Ontario winters.

He predicts that a hybrid system will probably be the best option for Ontario growers, utilizing both LEDs for inter-crop lighting and HPS overhead.

The greenhouse has a pair of curtain systems – one for energy, the other for shade, and the latter also has light diffusing properties to help improve the microclimate.

At Mucci Farms, grower Herney Hernandez pointed out a number of labour-saving features incorporated into the company’s cluster tomato operation.

A key component is the completely automated chain-driven cart transport system that moves produce and bins between the greenhouse and the packing house.

The greenhouse also has a computerized labour management system to assist with existing traceability measures and to help identify crop issues before they become a problem.

As for putting older greenhouses to new uses, Anna’s Flowers (Kingsville) began as a greenhouse tomato operation, while Colasanti Tropical Gardens (Kingsville) has repurposed a number of its greenhouses into family entertainment uses.

Featured with the latter are play areas, an 18-hole miniature golf course, and a popular restaurant and banquet facility. They also have growing facilities and a large garden centre.

The day started out with a whirlwind tour of the Greenhouse and Processing Crops Research Centre in nearby Harrow.

Hao has a number of energy efficiency and conservation projects underway, including work with supplemental lighting and year-round vegetable production. He’s also looking at new glazing materials, including diffused glass. (See our feature in the June 2015 digital edition, and in our archives.) Cerkauskas is keeping on top of new disease threats, including fusarium oxysporum in peppers. He and his team have identified the pathogen, tested the various treatments, and assessed how susceptible the various varieties are. A factsheet is being prepared for growers.

Labbe is the most recent addition to the team, taking over from entomologist Dr. Les Shipp who retired last year. She already has a full plate of projects underway, including studies of how supplemental lighting and LED lighting affect pests and biological controls.

The day concluded with a quick tour of the new one-acre greenhouse at the Vineland Research and Innovation Centre. It’s Canada’s first pre-commercial scale greenhouse dedicated to research and innovation. Work was nearing completion at the time of our visit in early October.

Featured are greenhouses ranging in height from five metres (for ornamental research) and seven metres (vegetable projects), along with underground servicing to minimize shading. There is also collaborative office space that will be used by visiting scientists or companies.

CGC EDUCATIONAL SESSIONS
Labour management was the focus of this year’s keynote presentation by Michelle Painchaud, president and CEO of the Painchaud Performance Group. The company has clients across Canada, including a number of greenhouse operations.

She had a quick tour of the trade show and was impressed by the range of products and technologies on display. However there were no booths that specifically addressed the “people” side of the business.

She said that a high performing organization has four characteristics:

“Whenever I look at poor performance by an organization,” said Painchaud, “the first person I look at is the leader. Employees will follow the standards you set.”

Communication skills are important tools that many managers need to sharpen. “If you want to create a high performing, energized team, get your employees involved in your decision-making. Get their input. Tell they why you are making changes…Employees want to be involved.”

COMMUNITY FUNDRAISERS
In a garden centre session, Karen van Duyvendyk of Dutch Growers Home and Garden of Regina outlined the steps required to host a successful fundraiser or open house. (She was one of our Top 10 Under 40 award winners last year.)

The shop hosts several community events each year, and all sell-out quickly.

No paid advertising is required if you do a good job on social media, she explained, as Facebook, Twitter, Pinterest and direct e-newsletters are all effective.

The best time to broadcast the messages are the morning, noon hour and supper time, “because that’s when people are on their phones.”

Charities welcome the opportunity to partner with garden centres. It is a good fundraiser for them, and they also have volunteers to help with the reception.

“Volunteers are important because labour costs can add up very quicky. The charities are great at providing volunteers.”

Local wineries and micro-breweries are keen to join in because of the exposure they gain. They will also promote the event through their own social media streams. “They can engage customers you might not be in contact with.”

Dutch Growers has been quite successful with its women’s fashion department. “We have about four fashion shows a year.” The majority of the models are family and friends. “Involve your team. Make them feel special.”

Part of the New Varieties display.

Speakers included Sean Westerveld, a horticulture specialist who handles many of the medical cannabis inquiries for OMAFRA, and Cole Caccciavillani, an owner of Aphria Inc., a leader producer in Ontario.

Westerveld provided an overview of the growth of the sector, and addressed some of the common questions he has been asked.

There are some supply and demand concerns, as there are many applications in the system. The fear by some is that eventually there could be too many producers with too much product, and that will force prices down.

It’s an extensive application process, and applicants will have to satisfy a variety of criteria set by Health Canada, everything from security and product purity, to odour control and extensive owner and staff background checks.

In addition to senior levels of government, applicants must also deal closely with municipalities to ensure they meet local zoning requirements.

Aphria supports evidence-based research around the efficacy of medical cannabis. One study, for example, is looking at its use with arthritis pain management.

Aphria is one of several publicly traded companies in the field. It’s difficult to obtain bank financing for such projects, “and unless you have deep pockets, you need to go somewhere for that capital.”

His presentation noted how thorough and detailed the regulations are for growers, and that it requires a new skills set for growers and managers.

The plant is photoperiod sensitive. It likes short days to set bud, and has a “tremendous appetite for fertilizer.” Height control is a challenge because there are no growth regulators.

Only biological control can be used for pest management.

It was interesting to note that while no questions were posed in the open session, there was a long lineup of attendees wanting more information from the speakers at the end of the session.

We’ve posted the photos of the award winners on our website at greenhousecanada.com.

There were numerous networking opportunities again this year, including  the Happy Hour on the first day, and at The Gathering later in the evening. It was at the evening reception that we formally introduced this year’s Top 10 Under 40 award winners.