Epic Gardens of Niagara-on-the-Lake launched their trial gardens program this year. The goal is to determine what new varieties measure up for consumers under local conditions. “There are so many variables. Hardiness zones are best used as a general guideline.” 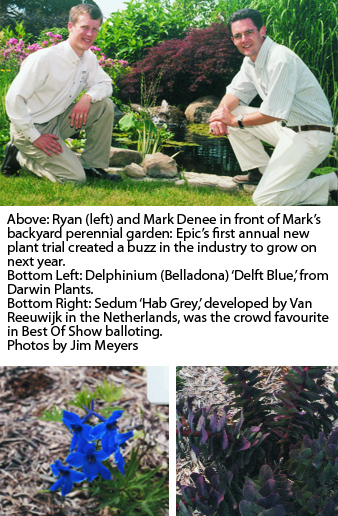 You’d think that a company growing perennials for the home garden market would have special market challenges. While new homebuyers and converts to flower gardens that don’t need to be replanted every year – just added to – may fuel the market, by its very definition perennial means to last for a number of seasons.

Fact is, some perennials don’t. Not even after what was in Niagara-on-the-Lake and in many other less temperate parts of Canada the mildest winter ever recorded, as Mark Denee of Epic Gardens discovered. While 94 of the 113 plants that were planted at the Epic Plant Company’s first test garden survived, 11 were lost and five suffered some damage. Three others were planted in the spring and didn’t over-winter in a growing area of Canada that’s renowned for being easy on plants even in what’s considered a cold winter.

Avid gardeners are always looking for new varieties and that has caused some to be introduced too quickly, says Mark, 33, who took over the family business with his brother Ryan, 29, when their father Peter died three years ago. Mark, who attended the University of Guelph, is the horticulturist in charge of the test garden, and Ryan is the number cruncher.

Mark says his father would have agreed it’s time for what will be ongoing testing for winter hardiness at Epic. The company grows some 1,200 varieties of perennials for garden centres in the Great Lakes regions of Canada and the U.S. Each year, it adds and subtracts about 100 varieties, which will make the test garden a valuable asset in determining what to keep and develop for the market and what to withdraw.

He said the sales boom created by the Baby Boom generation coming of age fueled a demand for new varieties and a greater understanding and appreciation of perennial gardens. Since then, there has been a plethora of new varieties and the need to filter out those that don’t live up to the hype of breeders.

“Mistakes were made by the industry introducing new varieties too quickly in the ’90s when there was a boom in    perennial sales,” he says.

Epic wants to see plants that survive at least one winter, whatever the variables in temperature, snow cover, or moisture that all factor in to plant survival. “There are so many variables. Hardiness zones are best used as a general guideline,” he said.

The test garden is behind Mark Denee’s own showcase backyard perennial garden that served as a greeting area for the more than 100 people who attended the two-day open house in mid-June. The once-a-year open house the next day for the public drew more than 1,500.

“Overall, we were very pleased for a first-time event,” Mark said about the first annual plant trial test. Its generated publicity and a buzz in the industry to grow on next year, he said.

As for trends, Mark said there are many opinions. However, the key word he’s been hearing is “simplification,” as the Boomers get older and move to smaller homes or want a flower garden that demands less maintenance.

“Perennial gardening is more traditional and strict,” he said in an attempt to define a perennial gardener who, he adds, is often a garden club member.

The Epic Plant Company (www.epicplants.com) began in 1990 and has grown to produce 4.5 million plants annually at its 25-acre home greenhouse complex just outside the hamlet of Virgil, and Plant 2, which is on a 70-acre tract of land and also in the town of Niagara-on-the-Lake. Before that, Peter Denee, who emigrated from Holland with his wife Maria and young family in 1969, had built one of the largest garden centres in Hamilton area, which was sold when he moved to Niagara to develop his wholesale perennial
business.

Jim Meyers is a freelance writer and photographer in St. Catharines.