University of Guelph students get hands-on growing experience while tackling a number of topical greenhouse production challenges. Many of the projects have been suggested by growers.

Introduction: This year, a number of students were interested in learning about plant nutrition and the use of fertilizers in the undergraduate B.Sc. Agr. degree program. This is a third/fourth year course and the main emphasis during the semester focused on a research topic within the fields of plant nutrition and plant growth and development. For this, students conduct a project where they research a particular problem related to greenhouse nutrition. The students may also come with their own idea for a project, but I generally suggest something that has been raised by growers during the year. The projects are not considered to be conclusive, as time does not allow them to do an extensive full-fledged project. As well, some treatments are compromised due to time and space limitations, and/or mistakes are made. The exercise provides the students with some “hands-on” growing as well as some basic research experience. Below are short summaries of what the students have accomplished during the winter semester of 2007. 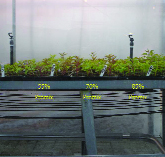 1. The effect of amending a premixed soilless substrate with coco coir on physical and chemical properties of the substrate and plant growth of celosia
Figure 1. The effect of different mixtures of Promix BX (0-100 per cent) and coco coir on celosia seedlings.
By Michael Gregorasz
The effects of adding coco coir (PeatExceed) to a standard media (Promix BX) in different ratios were examined on porosity, EC and pH, as well as on the growth of celosia. Five different mixtures were used in (Promix/coco coir): 100/0, 85/15, 70/30, 55/45 and 0/100 per cent (V/V) were prepared and Celosia plumosa ‘Mixed Colours’ seedling were planted in each one.
No significant differences were found for porosity, EC and pH. However, there was a strong correlation between the root/stem ratio (dry weight) and the amount of coir added. With increasing amounts of coir, the root/stem ratio of celosia decreased (Fig. 1).

2. The effect of watering regime on the rooting of cauliflower seedlings in plug trays
Figure 2. The effect of moisture (per cent of container capacity) on root and shoot growth of cauliflower seedlings.
By Marinus van Eekelen
Root growth of cauliflower seedlings in plug trays is important for transplant quality into the field. It is
generally believed that withholding moisture to the seedlings will result in a more extensive root system. To test this hypothesis, three watering regimes (80 per cent, 60 per cent and 40 per cent of the water container capacity on a volume basis) were used to determine whether the root development of cauliflower seedlings in plug trays would be affected by the watering regimes. Two seeding (72 plug trays) dates and the cauliflower hybrid ‘Snow Crown’ were used. Treatments started immediately after germination. Watering occurred when the lower weight limit for each respective treatment of the plug trays was reached and then was brought back up to the original weight at 100 per cent (container capacity). After six weeks from seeding, the substrate was washed from the roots and the dry weight of root and shoots was determined.
There were inconclusive results from the first seeding, while according to the results from the second seeding the wet (80 per cent) treatment showed a significant increase in shoot and root weight compared to the dry (40 per cent) treatment (Fig. 2). 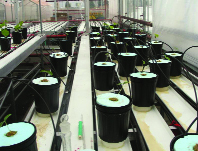 3. The effects of copper on growth of cucumber plants in hydroponic culture
Figure 3. Setup of recirculating hydroponic system for cucumber studies (see also Exp. 4).
By Yu Zhang
Copper is one of the essential micronutrients. The objectives of the investigation were to study the effects of Cu concentration on growth and development of roots and leaves of cucumber plants (Cucumis sativus). Cucumbers were grown hydroponically in a recirculation system using the pot system (Fig. 3) and utilizing the OMAFRA target values for the macro- and micro-nutrients but with different concentrations of Cu (0, 0.2, 0.4, 0.8 and 1.6 µmol/L).
Foliar surface area, fresh and dry weights of both roots and shoots, the nutrient content of total shoot and roots of the plant, and chlorophyll index of the leaves were determined after an eight-week growing period. No significant effects of copper were measured on the dry weight, nor were there any visual signs of copper deficiency/toxicity in any of the five treatments. Interestingly, the copper content in the roots increased (35–120 ppm) with increasing copper concentration, while the copper content in the shoots was independent (14.0 ± 1.0 ppm) of the copper concentration in the solution. The results show that cucumber roots are considered to be accumulators of copper. 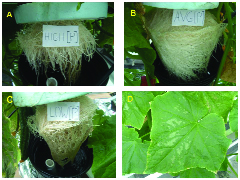 4. The effects of phosphorous on P uptake and root/shoot ratio of hydroponically grown cucumbers Cucumis sativus
Figure 4. Root development of cucumbers with high, medium and low levels of phosphorous in solution (A, B and C, resp.) as well as first symptoms of phosphorous deficiency on cucumber leaves
By Laura Maurice
This study has been designed to assess the distribution of phosphorous (fixation) within Cucumis sativus from a nutrient solution with high, ‘optimal’ and low concentrations in a recirculating hydroponic system. Using a comparison of tissue samples from roots and shoots of two plants from each fertilizer solution, along with overall plant performance under each condition, distribution and proper concentration of phosphorous in a fertilizer program was determined.
Tissue-P in the roots was generally higher than in the shoots. Tissue-P in both shoots and roots increased with increasing P nutrition. However, dry weight of shoots and roots decreased with increasing P concentration in solution. Deficiency in the leaves showed at the eighth to the tenth leaves for the low P treatment (Fig. 4).

5. A comparison between organic and synthetic fertilizers on Pisum sativum and Lycopersicon esculentum
Figure 5. The effect of fertilizer type and different concentrations of nitrogen on tomato.
By Jonathan van Wiltenburg
The efficacy of an organic fertilizer (RainGrow™) was compared to a synthetic fertilizer on the growth and development of pea (Pisum sativum ‘Ta Da’) and tomato (Lycopersicon esculentum ‘Golden Nugget’). The synthetic fertilizer was prepared using single elements so that the macronutrients in the synthetic fertilizer matched that of Rain Grow (4-2-3). Pea and tomato seedlings were grown for about 10 weeks and fertilized with about 250 ppm N. The tomato plants fertilized with the organic fertilizer showed superior growth
compared to the synthetic one (Fig.5).
These characteristics included increased height, increased number of open flowers, and increased truss number. It was also determined that the cause for this increase in performance was not fully understood, and further investigation would be needed in order to characterize the relationship that organic fertilizers have in conjunction with increased growth and development of tomato plants. No significant effects were measured for the peas. 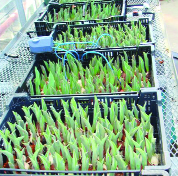 6. Aeration on hydroponically forced tulips
Figure 6. Set-up of three different aeration systems for hydroponic tulip production using needle trays. Bottom two trays are non-aerated (control), the middle two trays are using air bubblers, and the two top trays represent recirculating system.
By David Captein
The commercial forcing of cut tulips is undergoing a big change from ‘soil-grown’ to ‘water culture’ production. One of the frequently asked questions is whether tulips are affected by the dissolved oxygen content in the solution. In this project, the effects of aeration in the hydroponic trays were evaluated on the quality of hydroponically forced tulips. This was done by comparing two types of aeration (continuous flow of a circulating solution from the trays to an outside container or the use of two aquarium-type air bubblers per tray) with a stationary system (control) (Fig. 6).
After about 12-13 weeks of dry-cooling, the bulbs were stuck on pin trays and
rooted in a cooler at 5ºC for 2-3 weeks. After the cooling requirement was completed and the roots were about 3-4 cm, the trays were moved to the greenhouse for forcing (16ºC) and the aeration treatments. There were two plantings and two cultivars per planting. Tulip weight and quality in the continuous flow treatment was greater for three of the four cultivars compared to the ‘bubbler’ or control treatment (no aeration). Biweekly measurements of dissolved oxygen content in the nutrient solution also showed higher concentrations for the continuous flow compared to the ‘bubbler’ and the control treatments. 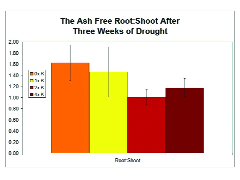 7. The effect of potassium on drought tolerance in perennial ryegrass (Lolium perenne)
Figure 7. The effects of potassium on root/shoot ratios of perennial ryegrass.
By Jennifer Foster
Drought can often be a limiting factor in turfgrass maintenance in municipalities with water bans. Through different methods, golf course superintendents can decrease their water use by increasing the drought tolerance of their turfgrass. The objective of this study was to investigate the effect of potassium fertilization (0, 90 [1X], 180 [2X] and 360 [4X] kg K2O/ha) on water absorption with normal irrigation and the water use efficiency under times of water stress in perennial ryegrass (Lolium perenne).
The studies were done in a greenhouse using 15-cm pots and the N-rates and P-rates were kept the same for all four treatments. Greater quantities of potassium resulted in more water absorption by the ryegrass during times without drought stress. The extra water did not necessarily convert to extra physiologically available water, as all rates after three weeks of drought stress lost equivalent amounts of water. The root/shoot ratio in the 0X treatment was greater than those for the 2X or 4X rates (Fig. 7). Increasing the rate of K did not affect the drought tolerance of perennial ryegrass. 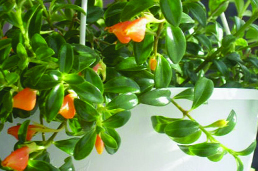 8. The effects of ammonium/nitrate ratio on growth and development of goldfish plant (Nematanthus nervosus)
Figure 8. Young shoots of goldfish plants.
By Jason Wierenga
Rooted cuttings of the goldfish plant
(Fig. 8) were planted in 15-cm diameter pots and were fertigated with 200 ppm N using three different ratios of ammonium/nitrate, namely 30/70, 40/60 or 50/50. The levels of P and K were kept the same for the three treatments.
The growth after the first pinch was collected and dried. Visually there were no differences between the treatments; this was confirmed by the results of both fresh and dry weight of the growth for the three treatments. The pH of the soil decreased by more than 1.0 unit as the percentage of ammonium increased from 30 to 50 per cent. Flowering was greatly increased in the plants receiving the 50/50 solution. 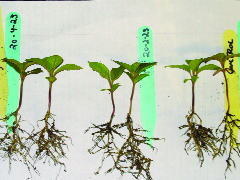 9. The effects of commercial mycorrhizal inoculants on Nannyberry viburnum
Figure 9. The effects of phosphorous (high-medium-low, from left to right) on viburnum seedlings.
By Alex Verbinnen
Mycorrhizal fungi are beneficial soilborne organisms that are able to infect the roots of many plants, aiding in the uptake of water and nutrients, especially phosphorous. Two commercial inoculant products, one applied by root dipping and one incorporated in commercial growing mix, were tested on Nannyberry viburnum seedlings.
Plants were also fertilized with different rates of phosphorous in a factorial manner in order to see whether there was an interaction with the inoculation. Growth related effects (shoots and roots) were assessed after nine weeks from inoculation. The results showed no significant effects from either the inoculation and /or the phosphorous rates (Fig. 9). Staining of the roots did not reveal any infection.