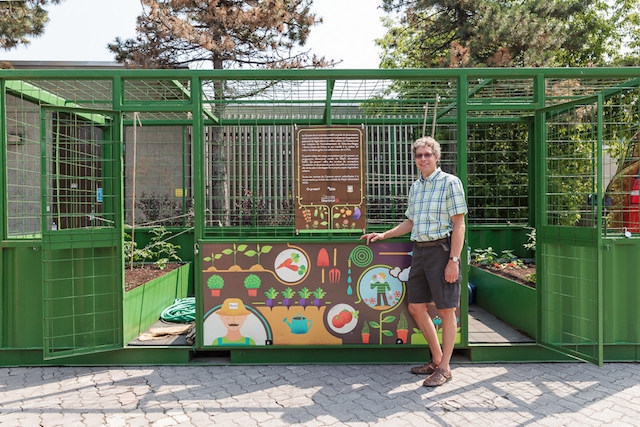 Borough Mayor Russell Copeman in front of the Conserre.

An initiative of the CDN – NDG borough, the Conserre was set up alongside the Vendôme metro station on July 2 thanks to the collaboration of the STM.

The Conserre is a container that was transformed into a demonstration garden in which various vegetables, fine herbs and edible flowers were planted on July 7. The project is aimed at promoting awareness of the potential of urban agriculture among citizens.

The Conserre will remain at the Vendôme metro station until the fall of 2015. Every week, community education workers will be on site to maintain the garden and answers questions from citizens.

This container-cum-urban garden is part of a project to reuse the borough’s containers.

“The installation of the Conserre at the Vendôme metro station is a direct expression of our desire to innovate,” explains Borough Mayor Russell Copeman.

“After the Conex, which was intended to encourage the public to adopt healthy lifestyle habits, we’re now promoting urban agriculture. Reusing containers allows us to reach out to citizens at the local level.”

This urban garden was designed by Ça pousse!, a social economy program put forward by the NDG Food Depot, which also ensures its maintenance.

Ça pousse! offers educational garden design, installation and maintenance services to certain types of institutions with the objective of helping them develop their own urban agriculture projects.

All the produce from the Conserre will be redistributed to the community through the NDG Food Depot. If this project produces promising results, a second container may be installed on borough territory in the summer of 2016.

Click on the link for further information on the activities of Ça Pousse!.