What greenhouse growers need to know. 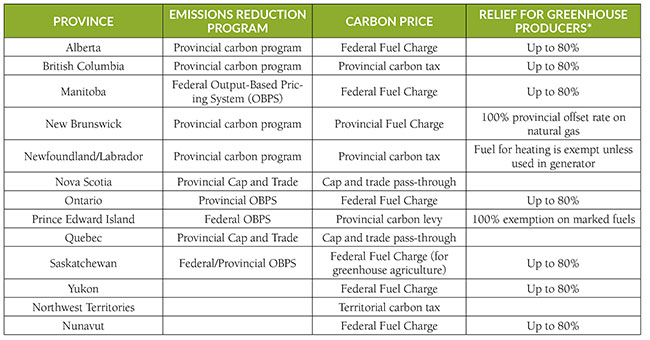 Carbon pricing programs per province or territory, at a glance. *Note: Specific eligibility factors may apply and conditions may change. Please check local regulations for details.

All greenhouse growing facilities in Canada are subject to some form of carbon price on their chargeable fuel purchases. Growers may also be eligible for various forms of rebates, depending on the province in which they operate. This brief guide is meant to help growers understand and navigate the rules.

A price has been placed on carbon emissions to speed up the adoption of clean fuels that do not emit greenhouse gases when burned. Using fuels like propane, natural gas and gasoline produces CO2, methane, and nitrous oxides. In the atmosphere, these gases act like a blanket, preventing the earth from radiating its heat into space. These gases are now retaining so much heat, they are altering the earth’s climate. To reduce the risks of climate warming, CO2 emissions must drop and eventually stop.

British Columbia was the first Canadian jurisdiction to introduce a carbon price in 2008. Other provinces subsequently introduced their own programs. The federal government initiated a national Federal Fuel Charge (FFC) in 2019. The FFC is a carbon price on fossil fuels across Canada which increases over time, rising $10/T annually from 2019-2022, and then rising $15/T annually from 2023-2030.

The FFC applies in jurisdictions which either accept the federal program or fail to implement their own deemed acceptable by federal standards.

As noted in the table below, greenhouse growers in Alberta, Manitoba, Saskatchewan, Ontario, Nunavut and the Yukon are charged the FFC. In these jurisdictions, an 80 per cent point-of-sale rebate is available where all or a substantial fraction of the facility is used to grow vegetables, fruits, bedding plants, flowers, ornamental plants, tree seedlings, medicinal plants or other plants, and where gas is used exclusively to produce heating and CO2 for the crops.

Based on current regulations, CHP fuel use would be ineligible for the federal rebate. According to the regulations, greenhouses can still claim the rebate for gas use at the facility and then self-assess the fuel charge for gas associated with electricity generation, although we advise greenhouses to work with the CRA to confirm how they require it to be done.

The rules vary between non-listed provinces. New Brunswick may allow greenhouses to register as a farmer or silviculturist to obtain fuel purchase exemptions. Newfoundland and Labrador allow exemptions for certain fuel types when the fuels are used for purposes other than in an internal combustion engine. Greenhouses within those provinces should approach provincial authorities to determine if their operations will qualify for exemptions.

Quebec and Nova Scotia have cap-and-trade systems. In these provinces, the carbon charge is included in the price of fuel and there are no exemptions.

Greenhouse growers can reduce the impact of carbon costs on their bottom line. Their first step must be to determine how much energy they actually require. This includes reviewing the amount of useful heat and CO2 necessary for optimal production levels. Many growers discover that they use more energy than needed. Reviewing operations closely to lower energy use can identify potential conservation measures such as curtains to retain heat and CO2.

Burning fossil fuels produces heat and CO2 – both of which are useful for greenhouse crop production. When a facility’s heat requirements exceed CO2 requirements, cleaner fuel sources for the heat can be considered. Examples include biomass, renewable natural gas or electric heating, or taking waste heat from nearby facilities. Note that biomass is generally exempted from carbon tax and carbon emissions programs on the assumption it would have emitted GHGs through decomposition. Office, warehouse and packaging areas are good candidates for electric heating as they do not have a CO2 requirement for crop production.

Greenhouses with lower heating requirements than CO2 requirements can consider purchasing liquid CO2. As carbon capture technology becomes increasingly available, capturing CO2 from nearby facilities and piping it into the greenhouse may become feasible.

Canada’s system of carbon prices and rebates is complex. 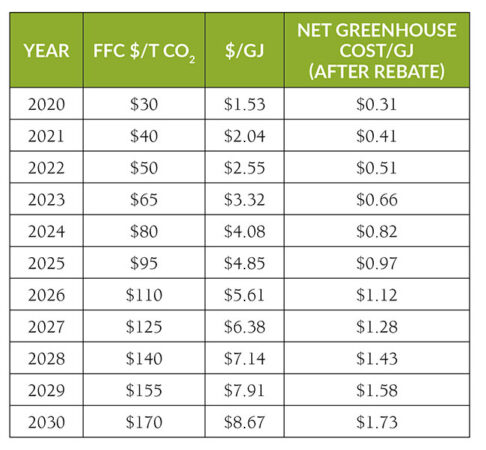 This table shows how the cost per tonne translates to a cost per unit of gas, as well as what it means to greenhouses after netting out the rebate under the federal fuel charge.

Note that for carbon reductions to be considered, they are required to be “permanent.” While the crops store CO2, the plants themselves are not permanent and can re-emit through the decomposition process. This is part of the justification for the 80% rebate on greenhouse fuel use.

Carbon charges are a reality for the foreseeable future, so understanding how energy is being used and knowing how much it’s costing are now critical requirements for every greenhouse grower. Learning to control energy use and to reduce CO2 emissions has never been more important. As costs continue to increase, greenhouses need to become more sophisticated in how they deal with energy and CO2 balances in their facilities. CO2 will always be required as part of the growing process, but greenhouses can take steps to ensure that they aren’t producing more than they need.

James Williams is an energy analyst at 360 Energy. He can be reached at james.williams@360energy.net.