Peat is an ideal growing medium, and Canada has led the way in responsible production. 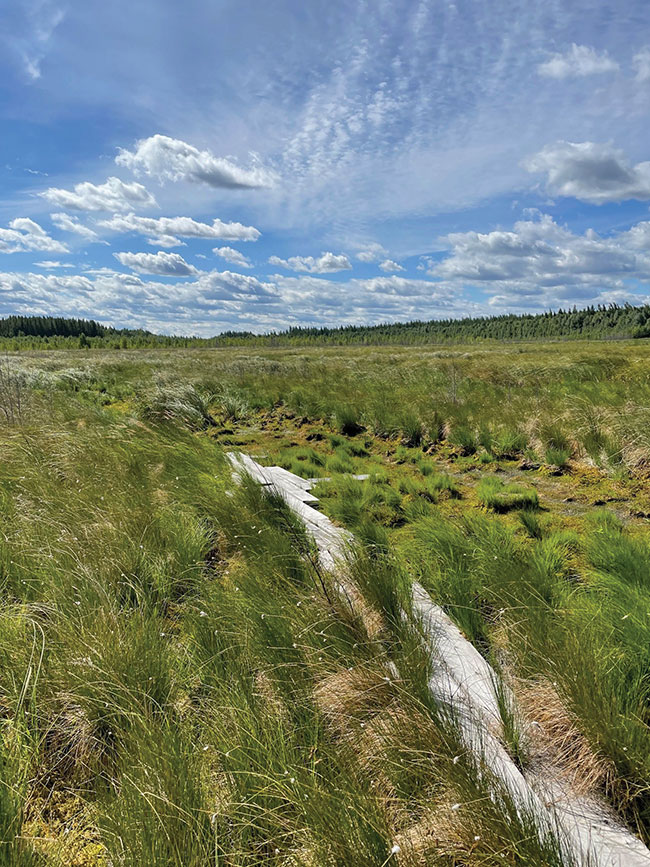 Peatlands cover approximately 13 per cent of Canada, the result of millennia of sphagnum moss accumulating layer by layer in the country’s wetlands. A rich source of organic matter for horticulture in Canada and abroad, peat has natural water-holding characteristics and a porosity that allow it to regulate water levels in the boreal forest and make it an ideal soil amendment and substrate in horticultural systems.

Canada harvests approximately 12.3 million cubic metres (435 million cubic feet) of peat annually, with 70 per cent used by commercial growers. It’s the most common substrate for producing starter plants of field crops including broccoli, cabbage and lettuce as well as ornamental plants. Peat is also the standard substrate for medicinal cannabis growers and the seedlings used for reforestation.

Global demand is also strong. Canada exported $727.6 million worth of horticultural peat last year, making it the world’s largest supplier. Shipments to the U.S. accounted for 96 per cent of export value and approximately 85 per cent of the volume; Japan, Mexico, Australia and South Korea completed the top five markets.

But the country’s peatlands also represent a potent carbon sink, with some estimates suggesting 30 to 70 kg of carbon in every cubic metre (up to 4.4 pounds per cubic foot). When it comes to carbon sequestration, peatlands are widely acknowledged as richer than the equivalent area of old-growth forest. Disturbing peatlands also releases nitrous oxide, a more potent contributor to climate change than carbon dioxide. This has led some to say the environmental impacts associated with the use of peat outweigh the benefits, especially in the face of escalating global temperatures.

“Canada has a lot of peat and peatlands. We’re not in danger of running out of peat, but that doesn’t make its use sustainable,” says Mike Bomford, a professor in sustainable agriculture and food systems at Kwantlen Polytechnic University in Richmond, B.C., and a fellow with the Post Carbon Institute in Corvallis, Ore. “At a time when we are scrambling to develop technology to pull carbon from the atmosphere and store it permanently underground, we need to appreciate that peat bogs have been doing exactly that, naturally, for millions of years. They can continue this process if left wet and undisturbed. When we drain and mine peatlands we reverse the process.”

Low profile, growing concern
Yet peat has a low profile for most consumers, who seldom see the media in which their food and plants are grown unless they’re visiting nurseries and garden centres. It’s also a minor concern for growers in terms of reducing carbon emissions – heating and transportation are much larger targets.

But this doesn’t mean the use of peat isn’t a concern, largely as a result of new protocols in Europe where very few peatlands remain undisturbed. Peat was mined for fuel long before it became common in horticulture, and the draining of peatlands has opened vast tracts of land for agriculture and urban development. This in turn has opened the door to decomposition, making the EU the second-largest source of carbon emissions from drained peatlands in the world after Indonesia.

“They don’t have any pristine peatlands left, so there’s a movement there to move away from harvesting peat to ensure that peatlands are maintained and they’re able to restore their peatlands,” says Asha Hingorani, president of the Canadian Sphagnum Peat Moss Association, which represents Canada’s peat industry.

The situation in Canada is quite different, she says. While every province has peatlands, the majority have not been mined. Disturbances have been primarily the result of urbanization and industrial development, which together have claimed hundreds of thousands of acres. Peat extraction for horticulture accounts for just 34,000 hectares, primarily in Quebec, followed by Manitoba and New Brunswick.

But taking note of emerging concerns in Europe, the industry in Canada began thinking in the early 1990s about ways to better manage its operations.

“The industry saw what was happening in the EU and said, ‘We really need to do something about this,’” Hingorani says.

Global leadership
Traditionally, peat extraction involves draining the peatland, allowing the peat to be mined – today, it’s typically vacuumed rather than cut – and packaged. Commercial producers tend to focus on tracts of at least 50 hectares and a peat thickness of 2 metres or more, and even then tend to leave at least a half-metre of peat remaining following harvest.

But beginning in the early 1990s, research at Université Laval under Line Rochefort began exploring how to mitigate the effects of peat extraction and remediate disturbed peatlands. The team developed the moss layer transfer technique, which involves the reintroduction of moss and other site-appropriate plant species to ensure biodiversity. A near-natural carbon balance can be achieved within 10 to 15 years of restoration efforts, while peatlands’ role in regulating the water table can be restored within 15 to 20 years.

Restoration is now mandated under the peat extraction licences harvesters receive following an extensive, seven-year approval process. It’s also part of the VeriFlora certification system for peat producers. In 2016, producers initiated the National Peatland Restoration Initiative and are on track for restoration of the country’s mined peatlands by 2031.

“When you’re done with the land you have to restore it, whereas in Europe that’s not the case,” Hingorani says. “We know that we can bring those peatlands back to essentially the level they were before in about 15 years.”

The moss layer transfer technique is now being adopted in Europe, where peatlands have typically been mined more aggressively than in Canada, where the typical practice is to leave a half-metre coverage.

“Europe is now looking to us, because we’re the stewards of the science,” Hingorani says.

Proactive policies
Researcher Maria Strack, a professor and Canada Research Chair in the Department of Geography and Environmental Management at the University of Waterloo, has worked with the peat industry on remediation projects in the past and agrees. While peatlands account for just 0.2% of greenhouse gas emissions in Canada, the industry’s proactive role has helped it stay ahead of concerns. “The industry itself in Canada has been very proactive in developing restoration practices and applying those restoration practices as well,” she says.

But action shouldn’t lead to complacence, she adds.

BVB Substrates, a Dutch company that produces substrates for soilless growing systems in partnership with the Finnish company Kekkilä, is among them. BVB product manager Bart Verheijen notes that air penetration, water-holding capacity and the ability to maintain a stable pH are all important criteria in substrates, and peat is consequently the single-largest component of many of the company’s substrates.

But consumers won’t support growers who use materials that damage the environment, Verheijen says. BVB Substrates has therefore committed itself to sustainably sourced peat and peatland restoration.

“We want to manage our peatlands in the most responsible way possible. First of all we don’t go to the unspoiled peatlands. We are going to peatlands that have already been used,” he said. “We actually want to bring these peatlands back to a better state than when we found them and, through a renaturalization of these peatlands, we want to trigger the absorption of carbon dioxide again.”

But it’s also working with peat alternatives, including coco coir (also known as coco peat, because it’s derived from coconut husks) and perlite, a permeable volcanic rock. Wood is another alternative.

Coco coir allows good air circulation and absorbs water rapidly and forms 30% and 50% of substrate mixes. But it requires buffering to ensure a stable growing environment and adequate nutrition.

Perlite, a permeable volcanic rock, is used to boost air penetration. It also has good water-holding characteristics, making it ideal for substrates. It typically represents 25% and 35% of BVB mixes, a proportion similar to peat.

Such mixes are popular because they allow growers to tailor mixes to specific crop requirements.

“There’s not too many people using straight peat moss anymore,” says Bruce Vance, national accounts manager with the Evergro division of Nutrien Solutions in Delta, British Columbia. “[But] there’s still a huge amount of peat being sold… you see it in the retail shops all over the place.”

This underscores the unrivalled place peat has in terms of its natural characteristics and broader impacts.

“All alternatives have some environmental impact,” Strack adds. “The greenhouse gas emissions may be lower from other alternatives, but there may be other environmental or social impacts that arise from those… it’s important for growers to be aware of any potential impacts of the growing medium they choose to use.”

It’s this awareness that will challenge the industry. Knowing that peat harvesting contributes even slightly to more variable and extreme weather patterns, governments and industry are more cautious when it comes to expanding operations.

“There is a concern, or an awareness, that the opening of a new site in Canada is going to disturb what is a relatively pristine site right now,” Strack says.

Europe has prohibited extraction from undisturbed sites in favour of disturbed peatlands. This makes use of an existing resource rather than initiating new damage. Combined with peatland restoration and systems of paludiculture (crop production on wet soils, especially peatlands), the approach aims to work in harmony with peatlands and restore their natural function in the interest of restoring balance to the ecosystem.

Peatland restoration in turn allows peat reserves to rebuild, accumulating at a rate of 1 mm a year.

“We can return the function, but the process of peat accumulation is a long-term process,” Strack says.