Proper clean-up and removal are key to keeping CGMMV at bay. 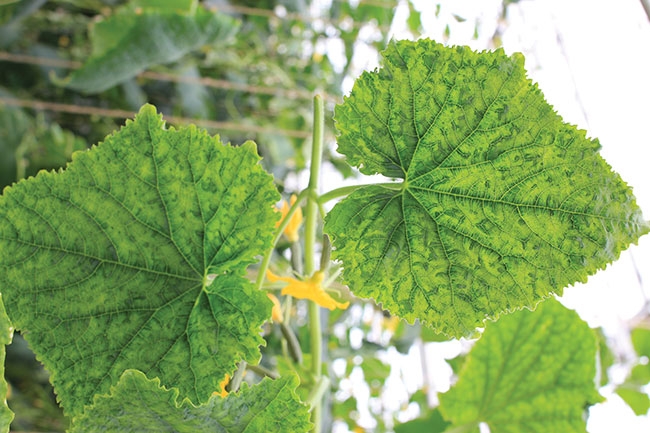 It’s been almost five years since the cucumber green mottle mosaic virus (CGMMV) was first reported in Greenhouse Canada, but that doesn’t mean growers should be any less vigilant.

CGMMV is very stable, says Dr. John Zhang, director of the greenhouse research and production complex at Alberta Agriculture and Forestry. “Its particles can remain infectious without the leading host for several months in crop residues, soils – even on some surfaces off the crop or on the ground. It’s quite a tough plant pathogen to be dealing with.”

Like other tobamoviruses, CGMMV can survive on stored seed for years, but that isn’t its main form of transmission.

“It’s quite easily spread mechanically,” says Zhang. Compared to the tomato pepino mosaic virus (PepMV), CGMMV has a much higher infectivity rate and can be contracted on contact. “It is very contagious.” Citing research from other studies, Zhang says CGMMV has been shown to spread between cucumber plants through their handling, contact with infected leaves, wounds made from cutting tools and contact with farming equipment. Chewing insects such as the cucumber leaf beetle (Raphidopalpa fevicollis) or pollinators such as the honeybee (Apis mellifera) have also been implicated.

Also unlike PepMV, this cucumber virus doesn’t seem to require particularly favourable weather or extra cloudy and humid conditions to thrive. “The growing conditions for the cucumber crop are almost perfect for the virus itself,” Zhang explains. Compared to other greenhouse crops such as tomatoes and peppers, cucumber’s faster growth rates help to propagate and spread the virus more quickly.

Diagnosis isn’t difficult
For most viruses, the growing point of the plant, which contains the youngest and freshest leaves, will be most susceptible due to the higher levels of nutrients, says Zhang. At early stages of infection, the cucumber plants will continue to grow and bear fruit. But as the virus becomes more severe, the cucumber fruit will start to show symptoms and become unmarketable. The plant itself will eventually stop growing altogether or show severe distortion. “It’s ugly,” he says.

As the name implies, the virus causes mottling, blistering and distortion of the cucumber plant. “You’ll see small bubbles on the leaf surfaces, especially on those young, fresh leaves,” describes Zhang, “and colours become a little bit darker than the neighbouring areas.” A mosaic pattern may eventually show up on the fruit as well, with spots of light yellow and dark green. “The fruit either become pointy or curl,” he adds.

Greenhouse cucumber growers should make sure that they purchase seed and/or seedlings that have been certified virus-free. “Disease-free seed and seedlings are the first line of defence against disease invasion,” says Zhang, who recommends that seedlings be treated or tested from the place of propagation to prevent potential introduction of the virus into the greenhouse.

“The CGMMV ImmunoStrip is an on-site tool [that can] quickly detect all strains of CGMMV in foliar tissues of melon, watermelon, squash, cucumber, and pumpkin,” notes Zhang. “Simply follow the instructions in the product package, put the leaf samples in the buffer solution, grind them and then insert the test strip in the solution for a few minutes.” A control band will be present, and if the sample tests positive for CGMMV, a marker band will appear. Otherwise, the absence of a marker band indicates a negative result.

It’s an easy and simple test that requires no equipment or expertise to run. “Results are obtained in as little as a few minutes, making them perfect for use in the field or greenhouse,” he says. Furthermore, the ImmunoStrip is specific to CGMMV and does not cross-react with other viruses that may infect cucurbits.

Take every precaution
According to Alberta Agriculture’s CGMMV factsheet, infection of a cucumber seedling will lead to more severe consequences for plant growth and fruit production compared to infection at later growth stages. If symptoms are found and the test proves positive, roguing soon after transplanting is encouraged to prevent the spread of the virus, but it’s not enough to remove just the plants with symptoms.

“Removal of any infected plants can be very tricky,” says Zhang. “When you first see the symptoms, that means the pathogen has already been in the plant for a certain period of time.” Any neighbouring plants that do not show visible symptoms will likely have contracted the pathogen already. For plants in their later stages, Zhang says he would likely lean towards letting the crop go to harvest and maximize their production, making the decision on a case-by-case basis.

The virus’ stability and persistence means that subsequent cucumber crops can be easily affected. When removing plants, Zhang says growers need to take every precaution, follow every sanitary procedure and avoid contamination of the surroundings. In addition to minimizing contact with infected plants, Alberta Agriculture’s factsheet also suggests removing weeds and volunteer plants, as well as treating crops with foliar inputs to prevent the spread of pests that can mechanically carry and transfer the disease. Crop debris should be cleared from commonly overlooked areas such as screens, vents, pipes and bench legs, before the debris is covered, buried or burned.

Proper clean-up and removal of all plant residues is one of the key steps to preventing CGMMV. Sometimes there is fruit under the ground cover, stems at the ends of the rows or missed seeds starting to germinate again, Zhang points out. “Those types of things should be removed, as they can act as reservoirs for the virus.”

All tools and surfaces should be washed and disinfected, including tarps, flats and pots, irrigation lines and drippers, floors and walkways, as well as tables and fixtures in the header house. If the greenhouse isn’t first thoroughly cleaned with detergent or cleaning solution to remove dirt, dust, soil, crop residues or pests, the effectiveness of disinfectants like Virkon will be greatly reduced – no matter the concentration used, cautions Zhang.

Because it’s an oxidant, exposure to air can lessen Virkon’s effectiveness. The loss of its dark pink colour is usually a good indicator of this, with Zhang noting that they prepare fresh Virkon solutions almost daily.

A 2% Virkon solution is recommended for the entire greenhouse just prior to a new crop. During cucumber production, labcoats and clothing should be sprayed with 2.1% trisodiumphosphate.

In a follow-up study by Alberta Agriculture, this time led by Dr. Walid Ellouz, the team found that the combination of cleaning with a pressure washer and foaming twice with an alkaline sanitizer reduced CGMMV contamination by up to 99 per cent on greenhouse surfaces. Because disinfectants can be inactivated by organic matter, the report stresses the importance of removing debris and other organics prior to beginning the disinfection process.

Alberta Agriculture’s study also tested a number of alternative sanitizers and disinfectants on different surface materials in the greenhouse. SaniDate 5.0, Strip-It and KleenGrow were evaluated on plastic, wood, metal and concrete. While none of the treatments were able to eliminate CGMMV entirely, some combinations were able to reach CGMMV levels that rivalled those of 1% Virkon-treated surfaces, including a combination of Strip-It + KleenGrow on all surfaces, as well as SaniDate on metal and wood surfaces.