A look at Qualitree’s expansion and the ongoing evolution of their irrigation and water treatment systems. 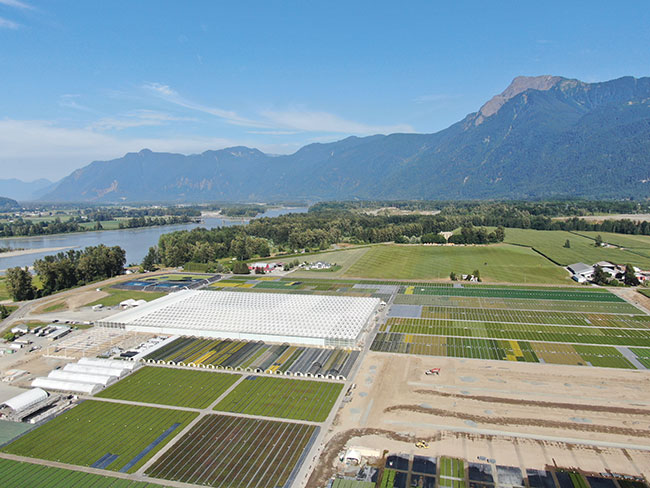 When 50 acres came up for sale next to Qualitree’s property in Chilliwack, B.C., the nursery knew it was time to expand and invest in new technology.

“We needed proper level floors in order to standardize and automate,” says Henk Rozendaal, co-owner and director of process innovations at Qualitree.

At the same time, there was news of impending environmental regulations in B.C. which would require producers to keep detailed records of water use and compliance. It was the ideal time for Qualitree to take proactive measures.

Founded in 1994, the company started out as a university project between two friends, Gary Neels and Tony Van Oort. From then, what began as a small greenhouse grew to become an extensive propagation and nursery operation, supplying markets across North America.

“Today, we closely resemble a Dutch-style nursery – from concrete driveways and rail systems for transportation to computer-controlled irrigation and climate control systems,” says Riana Kersten, technical advisor at Qualitree. The team incorporates technology and partnerships from overseas to further the efficiency of their expanding real estate. “On close to 100 acres, our operations include 17 acres of greenhouses for processing our ever-expanding propagation and finished plant lines.”

There are plans in place to add an additional warehouse, greenhouse and outdoor container space within the existing 100 acres over the next two to three years.

In 2017, Qualitree commissioned Dutch supplier ErfGoed to install a new permeable flood floor system, not only for their planned expansion, but for their existing infrastructure as well.

Composed of porous stone and a drainage system covered by permeable cloth, the cultivation floor is said to be designed for promoting an optimal microclimate. “The uniform watering ensures a strong root system, uniform crop and a longer shelf life. Due to the vertical drainage and the vitality of the crop, the disease pressure is minimal,” says Corné Verduijn, project manager for ErfGoed.

Verduijn adds that their flood floors will also provide a cooling function and supply air that matches the composition of the greenhouse, including CO2, humidity, air composition and temperature.

But like any new system, it takes some getting used to.

For one thing, Qualitree needed to ensure that their equipment wouldn’t damage the cloth or create ruts in the floors which could lead to uneven moisture. This meant retrofitting the machinery used for trimming and moving plants, explains Qualitree’s greenhouse grower, Chris Knezetic.

“Not all plug sizes, soil types and plant requirements are created equally,” he adds, which is why it’s important to always have additional methods for irrigation. In Qualitree’s case, they supplement with irrigation booms from Cherry Creek Systems.

In Qualitree’s container yard, grower Mindy Neels says the level floors have allowed her to use over-the-bed trimmers and sprayers, producing more uniform crops than ever before.

She also notes how irrigation lines are located above ground for easy maintenance and troubleshooting. “We don’t want to be digging up the ErfGoed floor in order to find a leak, for example.” But what she’s most excited for are the scales built into the floors that will allow Qualitree to make more accurate water management decisions. “There is one scale per irrigation zone, and the data collected by the scale is integrated with the Argus system we use. We will be able to use weight measurements to trigger irrigation events, instead of relying on human decision makers.” 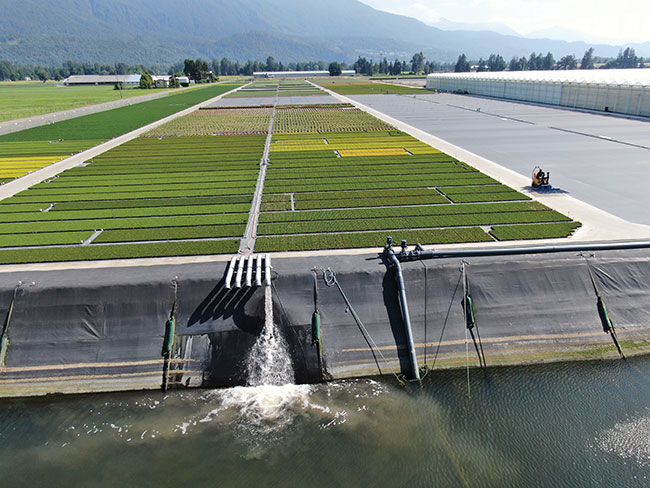 Though sensors and scales will help bring an additional layer of automation to the operation, they still require consistent checks, notes Knezetic. “Sensors are only as accurate as the last calibration.” The greater uptake of technology has also underscored the need for local experts to program, troubleshoot and maintain the system, particularly during a pandemic when cross-border travel is more difficult. Plus, the Qualitree team is learning how to program things themselves. “Every month there is improvement to our knowledge of the system and it is another step towards becoming more self-sufficient.”

According to Verduijn, the expansion required installing brand new water controls and storage tanks to collect and recycle all of the water and fertilizer from the operation. Large outdoor water basins store rainwater and drain water, while silos inside the control room buffer the ebb and flood water. This alone takes approximately 2,000 m2 (half acre) of space.

In addition to the water storing silos, the team installed pumps for the ebb and flow system, the overhead irrigation system and the irrigation booms, each with the capability of adding fertilizer, as well as treating and filtering water. “On a warm day, about 1650 m3 per hour can be pumped into the nursery to provide the plants with the right amount of water and fertilizers,” says Verduijn.

With Qualitree producing such a wide variety of crops, flexibility becomes important in the system. For instance, various parts of the nursery can draw from all of the fertilizer containers, changing up the ratio of nutrients as needed. “In addition, we have made backups at various places in the system to ensure that if something should [malfunction], water can continue to be provided via another pump unit.” 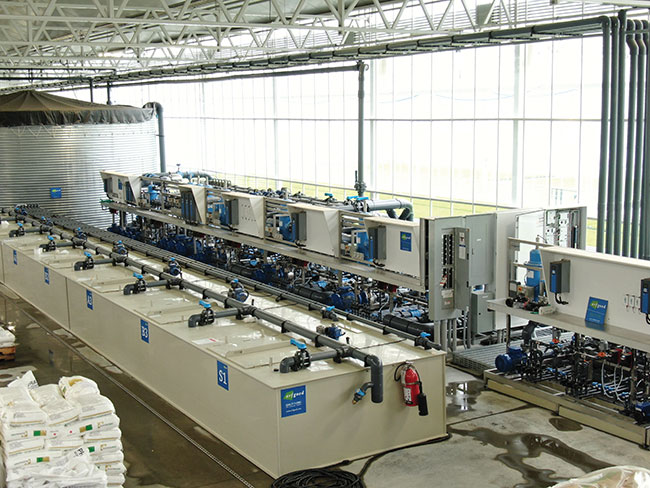 Growing a large variety of crops, flexibility in nutrient
additions became a large part of the irrigation system.

After many trials, Qualitree found success in using vapour pressure deficit (VPD) to root their cuttings.

Applicable to all stages of crop health and development, this method of measurement is used to more accurately control and stabilize environments. In Qualitree’s case, they’ve applied it in propagation.

Rather than placing their unrooted cuttings under plastic, as had been done in the past, VPD leverages their high pressure fog system from MJ Tech. This is connected to VPD sensors in the greenhouse, and all communicate with their central Argus system to regulate the greenhouse environment and generate the best conditions for rooting.

“The slightest mistake would cause plant death almost immediately on some of our crops.” This included holes in the plastic, as well as corners or edges not properly covered or covered in time.

In contrast, VPD has led to greater consistency in the outcome. Learning a new technique wasn’t without its challenges, however. “On our first attempt, we managed to lose about 50 percent of our crop.”

Since then, their use of VPD has led to increased crop health and yields, as well as reduced labour and material costs.

“While plastic isn’t preferred, it has its own failsafe,” he adds. “If the fog machine went down, I’d have to react fast to keep the humidity in check. There are problems [with VPD] that I am still learning to combat… such as oversaturation, but it’s all about continuous improvement.” 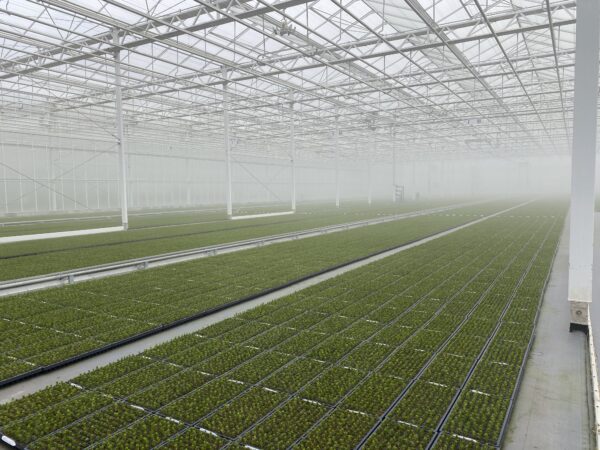 During the process, the Qualitree team realized the importance of water quality, its origins, as well as treatment options.

“We compared many different water treatment systems for our propagation greenhouse including ozone, copper, super saturation of oxygen, hydrogen peroxide, biological water treatment systems and ECA (electro-chemical activation),” says Gary Neels, co-owner and director of growing and research at Qualitree. “We decided to go with an ECA system from VDH Water Technology because it is safe, effective, and we have access to local service and advice.”

The disinfection system makes use of potassium salts which form a potassium hypochlorite solution in the tank. The process of electrolysis applies a charge to the solution, producing active ions that continuously target pathogens in the water and control biofilm in the pipes.

“The ECA machine generates and directly injects precise amounts of chlorine into our water at several injection points, keeping it pathogen-free,” says Knezetic. “Regular DNA tests of our source water have confirmed the efficacy of the product, and we have seen a major reduction in algae growing on our floors since implementation.”

Qualitree also introduced oxygen generators and nanobubbles to improve rootzone health. This boost in dissolved oxygen has also resulted in improvements in their silos and reservoirs, including their holding ponds which have been prone to algae and duckweed in the past
few years.

“Instead of applying water shocking chemicals annually to the ponds, we increase our dissolved oxygen levels to stimulate aerobic bacterial growth,” Knezetic says of their long-term project. A work in progress, they’ll be testing the use of pond plants as a way to naturally draw out organic compounds and return more oxygen to the water. “Ultimately the goal is to take our recycled water and reuse it over and over as much as possible while being naturally maintained by biological sources.”

Due to the extreme sensitivity of young plants, however, their propagation greenhouse doesn’t reuse water. Instead, the spent water is sent to the drain pond where it’s used on outdoor established crops. “Ultimately the goal will be maintaining a closed loop system indoors as well,” says Knezetic. “[We’re] looking into reverse osmosis water and other systems to help us achieve that goal.”

Introducing nanobubble and oxygen generators have resulted in improvements to their silos and reservoirs.

Building for the future

Adding new measures to recapture water while improving efficiency has not been easy, but this innovative producer has taken them all in stride, valuing quality in all that they do.

“Our water treatment journey is not complete yet, we still have a lot to learn,” says Gary.

For other producers looking to install new irrigation and sanitation systems, Rozendaal says there’s much to consider. This includes water demands for the greenhouse, warehouse and nursery at peak season, pipes diameters, costs involved, and more.

“When expanding, think about the next expansion,” he says. “Build for the future.” 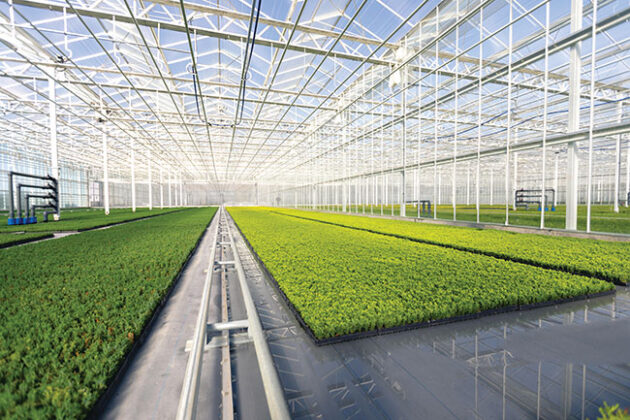 Not all plants have equal requirements, warranting different forms of irrigation.

“There are a lot of questions that need to be answered when planning an expansion of any size,” says Henk Rozendaal “What is the cost involved? Can we expand in stages? These discussions took weeks, months, even years before we made final decisions. “

While planning their expansion, here were some key considerations and lessons learned by the Qualitree team, as shared by Rozendaal:

Related
Flood floors pave the way to automation
Water Treatment: What System Should I Choose?
Finding water sanitation problems before they start
Healthy roots from start to finish