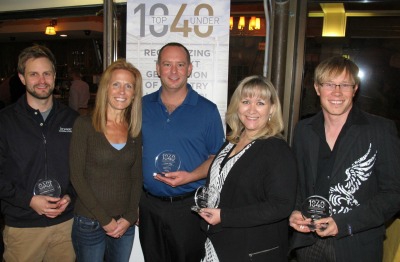 Oct. 8, 2014, Niagara Falls — The future couldn’t look brighter for the Canadian greenhouse sector. The next generation of industry leadership is already making its mark in taking things to the next level.

Oct. 8, 2014, Niagara Falls — The future couldn’t look brighter for the Canadian greenhouse sector. The next generation of industry leadership is already making its mark in taking things to the next level.

From new ways of growing crops, to community involvement, to industry association work, our inaugural Top 10 Under 40 winners are themselves successful in business while helping others succeed.

The awards were presented last night during The Gathering evening social event of the Canadian Greenhouse Conference in Niagara Falls.

The calibre of nominations made the selection process most difficult. We could easily have had a Top 15 Under 40.

As we said in promoting the program: “Canada is full of young, skilled and knowledgeable people who are driving the greenhouse industry forward. From commercial growers and wholesalers to manufacturers, equipment suppliers and service providers, they are the best and brightest in our industry.”

The full write-ups for each of the Top 10 will be included in our November edition.

RAVINDER CHEEMA is the grower/owner of Creekside Hothouse Ltd. in Surrey, B.C.

He is also a member of both the Canadian Young Farmers Forum and the Foreign Workers Program Council.

Most importantly, he is involved in the community. Creekside Hothouse donates a portion of its eggplant sales to the Multiple Sclerosis Society, since Ravinder has two close friends touched by the disease.

He is involved with both Kwantlen Polytechnic University and University of Fraser Valley with their agriculture programs.

JOHN DUNCAN is the green goods manager with Greengate Garden Centres in Calgary. He has worked his way up to a senior management position with the company in only a few years from his start as a greenhouse crew member.

Duncan is a self-proclaimed plant freak, and a regional horticultural celebrity of sorts with local TV and newspaper outlets in the Calgary region making regular use of his expertise in stories and on-air features.

The company has a summer promotion with City TV in which John helps viewers with garden makeovers.

Duncan is a frequent guest lecturer at garden club meetings throughout the region.

ADAM HENDRIKSEN is ornamental coordinator with Koppert Canada, and is based in Niagara Falls.

This Niagara College Greenhouse Technician program grad received the school’s Niagara Scholar Award for his outstanding dedication and GPA. He has been with Koppert the past few years focusing on solving major issues in many crops but his dedication to cut gerbera has proven most important.
Currently, he is a member of the Program Advisory Committee for the Greenhouse Technician program at Niagara College.

LORNE KING is the technical sales rep/technical coordinator with Plant Products in Leamington, Ont. He has worked closely with the Ontario Greenhouse Vegetable Growers on a number of projects.

Since 2008, he has served on the Canadian Greenhouse Conference trade show committee and has been committee chair for the last three years.

In 2012, he completed his certification as a professional agrologist.

GARY LEWIS, is president/owner of Phoenix Perennials in Richmond, B.C.  The company Lewis started in 2004 has one of the largest selections of perennials in Canada with over 4,000 different garden plants each year.

The British Columbia Landscape and Nursery Association named him its Communicator of the Year in 2013.

Lewis has served on the board of directors of the Perennial Plant Association since 2009. In 2013, he helped organize the PPA Symposium in Vancouver to great critical and financial success.

He has a book coming out with Timber Press – An Encyclopedia of Groundcovers. He handled all the writing and photography. The release date is tentatively scheduled for 2016.

JENNY MILLSON is greenhouse operations manager with Millson Forestry Service in Timmins, Ontario. In 2007, she and two other young foresters bought the business.

The economic downturn 2007 to 2009 was particularly hard on the forest industry and many tree seedling facilities in Ontario closed their doors.

In the fall of 2010, Millson made some critical decisions with regard to her greenhouse operations. Simply put, she re-invented the business to ensure its sustainability. In 2013, her efforts were recognized with an award for innovation at the annual Northern Ontario Business Awards.

She is a member of the Ontario Federation of Agriculture and spoke at Cultivate’14 in Columbus, Ohio.

He successfully represents the interests of greenhouse floriculture to the Canadian Food Inspection Agency and has been actively involved in developing programs with the CFIA such as the Bulb Remediation Protocol to handle bulb rejections.

For the past two years, Andrew has helped organize and actively participated in the highly successful grower night school courses put on at Vineland Research and Innovation Centre.

LAUREN RATHMELL is greenhouse director and founding member of Lufa Farms in Montreal.

As a co-founder, Rathmell has been with Lufa Farms since the beginning and was instrumental in launching the world’s first commercial rooftop greenhouse.

She oversaw the creation of Lufa’s software suite of systems, including a predictive analytics application for pests that allows Lufa to grow more successfully using only biological controls.

She also managed the commissioning and launch of its second rooftop greenhouse, the largest of its kind. Under her watch, it has produced 30 per cent higher yields than anticipated.

She also speaks at many events, including the Massachusetts Urban Farming Conference and an upcoming seminar at Harvard Graduate School of Design.

DR. ILDIKO SZUCS is an NSERC Industrial Post Doctoral Fellow at the University of Guelph.

Szucs completed her undergraduate degree at the University of Western Ontario.

On the basis of her grades and a strong record of performance in selected research topic courses, she was awarded a University of Guelph graduate scholarship and became the only student who entered from a bachelor of science program directly into the PhD program in the Department of Plant Agriculture.

Before completing her doctoral studies in 2013 with Professor Bernard Grodzinski, she also served as the PhD students’ representative.

She chairs the pottery committee and is past-chair of the tropical plant committee for the Garden Centre Group of Canada.

Karen is a member of the Regina Women Entrepreneurs group and the Alberta greenhouse forum.

Dutch Growers was named Business of the Year by the Regina and District Chamber of Commerce in 2008.

It has also been a finalist five of the past nine years in the ABEX Awards program, sponsored by the Saskatchewan Chamber of Commerce to honour outstanding achievements in business excellence.