Much has been said (but possibly
not heard?) recently about the cost of oil, petroleum and energy in
general. Further, the reallocation of agricultural food land over to
production of crops for ethanol has been blamed in many journalistic
arenas on the current global food shortage and rice crisis. Whatever
the reality of this, it is clear that “times are a changing” and we’d
best get used to it.

Much has been said (but possibly not heard?) recently about the cost of oil, petroleum and energy in general. Further, the reallocation of agricultural food land over to production of crops for ethanol has been blamed in many journalistic arenas on the current global food shortage and rice crisis. Whatever the reality of this, it is clear that “times are a changing” and we’d best get used to it.

Level Ground Trading is a Vancouver Island company that imports coffee, tea and tropical fruits using “fair trade” principles. It is a small office of perhaps a dozen or so people, but even so, the cumulative daily commute for its employees is about 900 kilometres! At a recent public evening, Stacey Toews (owner of Level Ground) outlined some of the practical ways his company tries to “walk the walk” of saving energy and thereby reducing the carbon footprint of its employees and subsequently that of the company as whole. A few of these measures include: 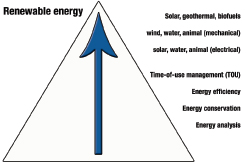 “The best way toward environmental sustainability,” said Toews, “is to reduce our consumption!” Certainly, with gas forecast to be $1.50/litre this summer, who can argue with that logic? Toews also mentioned that for each person who drinks two cups of coffee per day, it takes 15 coffee trees to keep that person supplied with their favourite “cup of joe” each year.

In an issue of Greenhouse Canada focusing on energy, I was wondering how this relates to our industry. After all, we have been incorporating energy curtains, variable speed pumps, heat dump tanks and the like in our greenhouses for years. We also use energy-saving models using real-time five-day weather forecasts built into the latest environmental control computer systems.

So I was interested to hear Aaron Burt at a recent grower conference. He brought the idea of the “Energy Triangle,” with more non-renewable energy consumption at the base of the triangle and the least at the top. Again, the main thrust of his presentation was not that we need to look for renewable energy options to satisfy our demand, but that we simply need to use less.

This starts with each business conducting an energy audit to review the possibilities of when energy is being wasted. Based on this, the second step is to practise energy conservation, perhaps by using timers, dimmers, smaller tractors (not the biggest), and “gear up, throttle back” principles. Thirdly, introduce more energy efficient systems, for example, by using light-emitting diode units instead of high-intensity discharge lamps.

Once all energy use is reduced as much as possible, Burt says it’s then that we should investigate time-of-use management (TOU), (i.e., incorporating lower tariff rate options where available from utility suppliers). This will reduce costs, but not necessarily the consumption.

The final step is to review sustainable energy options. These might include geothermal, solar, wind, water … even animal systems. While some might suggest we need to develop sustainable systems immediately, this framework allows the sustainable systems to actually stand a chance of meeting demand.

OK, this is nothing particularly revolutionary. So, what’s the point here? Well, it’s interesting that within the space of a few weeks, two people who have made their living out of selling things to us consumers (coffee and energy) both speak out the same message that we must simply reduce our consumption. Consider also that it takes 10 “fossil fuel calories” to produce and transport each food calorie in the average North American diet (Tom Starrs, SUV in the Pantry). Does that sound energy efficient? Perhaps we need to look deeper than the direct energy associated with our crops and investigate the bigger picture about just where we can reduce our energy dependency.

Gary Jones is chairperson of production horticulture at Kwantlen University and serves on several industry committees. He can be contacted at Gary.Jones@Kwantlen.ca .