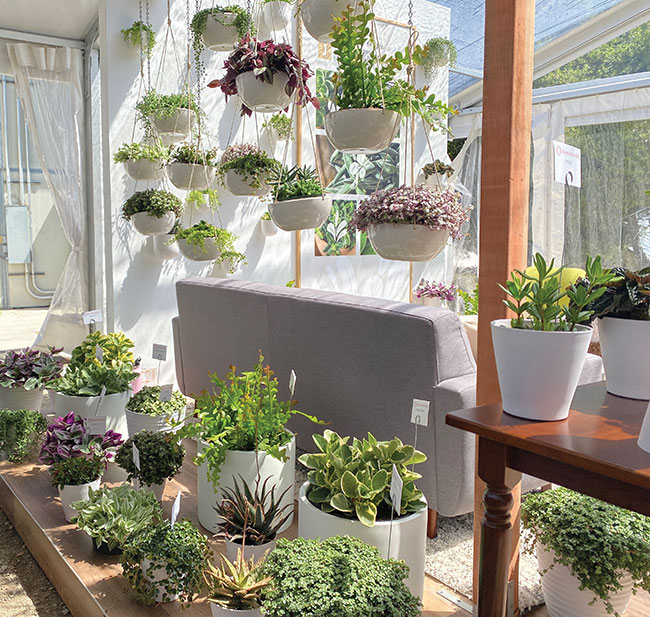 Dummen Orange has responded to the recent houseplant buying trend by providing growers with an impressive collection of interior foliage plant choices.

Innovation in plant breeding is at the forefront of everyone’s mind when touring the California Spring Trials. “What’s new this year” always captures the headlines, but new technologies and innovative marketing ideas are also showcased. This article will focus primarily on annuals and the highlights at each stop on the CAST tour that caught my attention. Subsequent articles in this series will focus on perennials and edibles.

Day 1 (BallFloraPlant, PanAmerican Seed, Ball Ingenuity, Selecta One. Santa Paula, CA)
PanAmerican Seed has just released the SolarScape series of sun tolerant, seed propagated interspecific impatiens. Prior to this innovation, all commercial sunshine tolerant hybrid impatiens were vegetatively propagated. Currently there are four colours in the series with those being: Magenta Bliss, Neon Purple, Orange Burst and White Shimmer. SolarScape XL (height of 28-33cm) is 20% larger than SolarScape (23-28cm height) but is only currently available in the Salmon Glow colour. This selection is also highly resistant to Impatiens Downy Mildew (IDM) like the Beacon (Impatiens walleriana) series. Where the Beacon series is an excellent seed choice for the full shade, SolarScape is best used in light shade to full sun conditions. 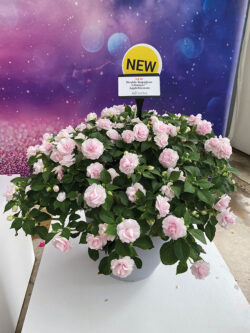 While still on the topic of impatiens, let’s look at the double flowered, vegetatively propagated Glimmer series of I. wallerina from Ball FloraPlant.[1] The innovation with this series is its high resistance to IDM. Glimmer is available in Appleblossom, Bright Red, Dark Red, Burgundy, Hot Pink, Salmon and White. The large double flowers have the appearance of mini roses to the casual observer.
Advertisement

The AngelDance series of angelonia is an eyecatcher. There are currently two bicoloured selections (fuschia and violet) available. In my opinion, the fuschia bicolour has an antique look that is especially attractive. The series has large flowers, strong flexible upright stems, and great heat tolerance.

A new seed canna from Ball Ingenuity caught my eye because of its red and gold bicolour bloom – Cannova Red Golden Flame. This is the first seed propagated canna with a bicolour flower that I am aware of. Cannova Bronze Peach and Scarlet are the other new colour additions to this series. 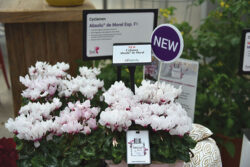 What about scented cyclamen – this is another new experience for me. The small sized Absolu de Morel has a very pleasant fragrance, mild in intensity. [2]

Selecta One North America is expanding and enhancing its dianthus assortment for Canadian and US growers for 2023. This company has been breeding carnations for nearly 90 years and continues to have a strong track record with cut and potted carnations. Case in point, is Selecta One’s ‘I Love You’ pot carnation with its multi-coloured (white, light pink and dark pink) blooms.  It has a short compact habit suitable for pots and three season landscape applications. (note a 6A winter hardiness zone).

Day 1, continued (Beekenkamp, Westhoff, Greenfuse. Somis, CA)
This is a new location for Greenfuse Botanicals with greenhouses built within a lemon orchard. First impressions at this stop were enhanced by the enjoyment of freshly squeezed lemonade. I’ll talk more about the Greenfuse stop in the next installment of this series. 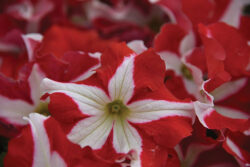 A new kalanchoe type caught my eye at the Beekenkamp display. Variegated Bongo is being marketed as a foliage plant, but it also blooms with scarlet flowers. Judging from the number of showy new experimental cultivars in the Sunny osteospermum and Tropic lantana series, a lot of new offerings are on the verge of being released.

Westhoff’s new Rift lobelia series was striking with its unusual white variegation on purple and blue blossoms. This plant series has a well branched mounding habit. If the Crazytunia series needed more colours it has them with eight new colours for the coming year. The improved Swiss Dancer with its red and white coloration is a good fit for patriotic Canada Day displays.[3] 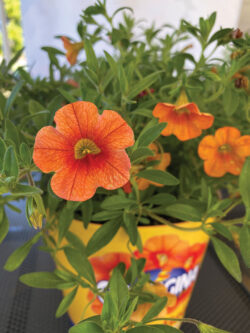 Our first stop was at the Santa Barbara Polo Club where Suntory had its display of plants. I noticed the new colour additions to the Surfinia XXL series of Watermelon Jazz and Salmon Vein. This series grows in an upright mounding habit and produces large, 9.5 cm diameter blooms. It also demonstrates good weather tolerance having survived a severe downpour a few days earlier. Suntory does select for landscape performance when breeding for this series. In the plant world we know of Suntory as the breeder of many fine plants such as the Million Bell series of calibrachoa but the company is predominantly a multi-national food and beverage producer. On show at CAST was a marketing move to pair these two business interests with Orangina (a beverage owned by Suntory) and an orange calibrachoa in the new release, Million Bells Mounding Orangina.[4] 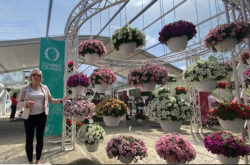 The next stop was the Filipponi Ranch Winery where Dummen Orange had temporarily taken up residence. The site was surrounded by Californian hills and wild turkeys and was a wonderful setting for showcasing Dummen Orange plant breeding. What stood out to me at this stop were the Smartunia and the Smartunia Windmill series of petunias.[5] This is the first commercial release of a Tobacco Mosaic Virus (TMV) resistant petunia series and is one of the results from the new Intrensa advanced breeding program at Dummen Orange. TMV has a very wide host range of plants that includes other Solanaceous garden plants such as tomato, pepper etc. This viral disease can cause severe stunting and marking of the infected plant. Since it is spread easily by handling and insect feeding, having a resistant cultivar available is highly desirable. The Smartunia Windmill series with its bicolor white star pattern is available in three colours (purple,hot pink and burgundy) and has strong, vigorous trailing habit. The Smartunia series with its five solid colours (raspberry gem, purple halo, hot pink, red, and white) has a mounding habit, similar to the Potunia Plus series.

Also on display was a new marketing scheme for houseplants: “Welcome to the Jungle.” Dummen Orange has responded to the recent houseplant buying trend by providing growers with an impressive collection of interior foliage plant choices. This marketing scheme also appears to be very consumer friendly. 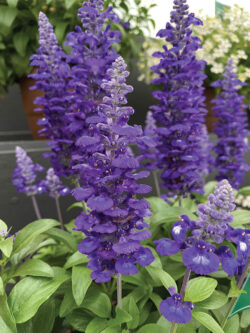 The new Sallyfun Blue Lagoon (Salvia farinacea) introduction got a lot of attention at the Danziger CAST stop. It’s an improvement over the popular Deep Ocean with a deeper blue colour and sturdier, more upright habit. All other growth characteristics are similar making it easy to replace Deep Ocean in production programs. [6]

On a totally unrelated topic, Danziger gets full marks for creating the most engaging “selfie” backdrop/booth that I saw on the entire trip. After two years of COVID inspired entrapment, the Canadians on our tour readily embraced “California Dreamin”!

Day 3 continued (American Takii, Sakata. Salinas, CA)
This year American Takii is introducing Crystal, the first series of glossy leaved flowering kale to hit the market with red, white, pink and deep red colours available. In pot production it would appear to have a slightly more compact habit than the Glamour series with plant heights of 15-25 cm.

On display at the Sakata stop were two new series. The first is the Flamma celosia available in five colours and a mix, the orange being a recent AAS winner. This series has a compact habit, great heat tolerance and the characteristic that older bracts remain colourful without fading. The second is the compact primula series – Dania. This compact primula is the product of Danish breeding and is ideal for early spring programs without PGR’s and growing pot-to-pot. Available in eight colours and a mix.

I remember years ago when SuperCal was first introduced. This series was the result of an intergeneric cross between petunia and calibrachoa and created a new plant class – Petchoa. Garden performance is excellent, but the consumer has not embraced this new plant type and does not recognize petchoa. Marketing research discovered that if it looks like a petunia, it should be marketed as a petunia. SuperCal is now newly released as a petunia. At this visit I learned that the SuperCal can survive and continue blooming after temperature exposure to -3°C temperatures. This fact and the range of yellow and orange SuperCal colours available have given suggestion to the use of this plant in fall programs. Of course, this idea begs the question of whether the buying public can be persuaded to forgo fall mums for cold hardy petunias? The autumn coloured SuperCal displays at CAST2022 were attractive; maybe a blending of SuperCal and fall mums in mixed containers would be a way of introducing the concept.

At the Syngenta Flowers stop, showy Louisana-inspired marketing displays were being used to promote the new Bandolista lantana series as well as with a new zinnia series. The new Zydeco series of Zinnia marylandica has excellent powdery mildew (PM) resistance like the Zahara and Profusion zinnias. What seems to set this series apart from the competitors is its 25% larger bloom size. The Holy Grail of zinnia plant breeding has been to come up with PM resistance and a bloom size and form comparable to those of Zinnia elegans; with Zydeco Syngenta Flowers seems well on its way to reaching that goal.[7]

Another exciting introduction from Syngenta is the new interspecific Calliope Cascade geranium. It has a vigorous spreading habit and season long bloom performance. Currently it is only available in vibrant violet colour with semi-double flowers. We can expect more colour selection in the coming years.

The genus Ptilotus was first introduced to the industry with the cultivar Joey. Joey now has a big sister with the release of Matilda. This heat lover is suitable for cutflower applications with sturdy stems of 50-80 cm lengths and long shelf life. A wedding themed display at CAST provided a wide range of ideas for its use in the floral industry. [8]

I also want to mention the new pansy series, Cats Plus. It is available in five colours patterned with “whiskers.” This series has an improved habit over Cats and can finish up to 10 days earlier.

Acknowledgments: I would like to thank Ball Horticulture and Greenhouse Canada for sponsoring this trip.

Rodger Tschanz is the Trial Garden Manager at the University of Guelph. He can be reached at rtschanz@uoguelph.ca