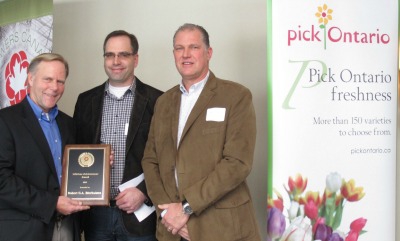 Graeme Murphy, the recently retired greenhouse floriculture IPM specialist with the Ontario Ministry of Agriculture, Food and Rural Affairs, is this year’s recipients of the “Outstanding Contribution to the Industry Award.” Murphy was unable to attend the AGM due to a previous commitment. He has been a key resource to growers across the province in dealing with pest pressures, and has done extensive research with biocontrol programs.

Robert Bierhuizen of Sunrise Greenhouses in Vineland Station was presented with the “Lifetime Achievement Award.” He has been a tireless volunteer on numerous boards at the provincial and national levels, and helped lead the drive to boost awareness of the industry with the senior levels of governments. Sunrise Greenhouses is also widely regarding as long being an industry innovator in technology and new product marketing.

He was introduced by longtime colleague William Ravensbergen of P. Ravensbergen and Sons Greenhouses of Smithville, Ontario.

(For more on the awards, see the March/April issue of Greenhouse Canada.)

During the AGM, FCO president Gerard Schouwenaar said the industry is coming off a very good year. “Last year, farmgate sales increased by $30 million, which is the first significant increase in five years.”

The lower Canadian dollar and fuel prices, coupled with ongoing flower promotion efforts by the FCO (Pick Ontario) bode well for growers. “There are a lot of opportunities for the industry,” he said.