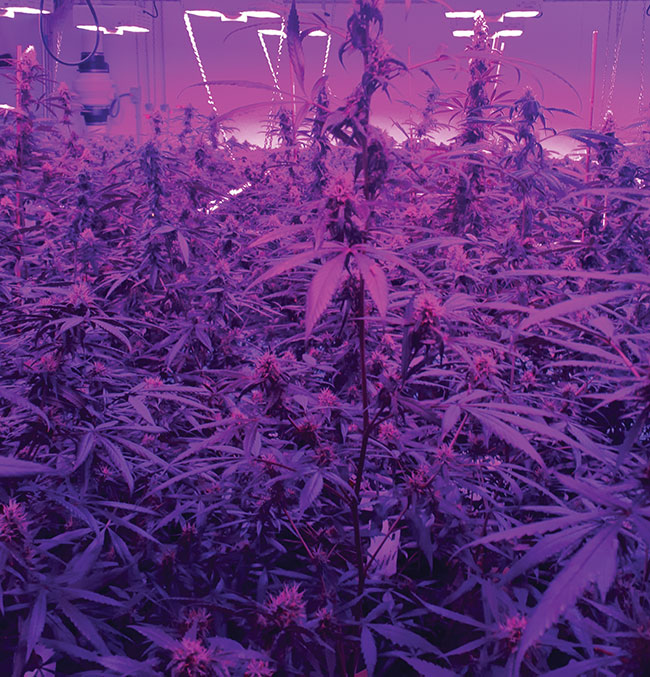 Cannabis can proliferate under light levels that are stressful to most other crops commercially grown indoors.

Research on cannabis production is distinguished from other horticultural crops from the decades-long prohibition, leading to a halt in peer-reviewed scientific research and innovation in the field. With the recent legalization in Canada, now is the time for scientists to catch up with research on this unique and exciting horticultural commodity.

Fundamentally, cannabis crops are just another floricultural commodity with (short day) photoperiod responses. However, it is the recreational and medicinal benefits derived from the unique secondary metabolite composition (e.g., cannabinoids and terpenes) associated with the unfertilized female flowers (i.e., “buds”) that is of prime economic value. Therefore, maximizing the production of bud biomass is of greatest relevance to cultivators.

Cannabis is known as a “light hungry” crop because it can proliferate under light levels that are stressful to most other crops that are grown commercially in greenhouse and indoor facilities. Therefore, lighting infrastructure and electricity represent major input costs for cannabis cultivators, especially in indoor environments where the crop lighting is 100% cultivator controlled. However, cannabis’ high economic value provides the economic incentive for augmenting lighting to levels that are substantially higher than most used in other crops. The question remains: how much light should a cultivator provide?

At low levels, the curve is a positively sloped line (e.g., between Y-intercept and the 1st hatched line);

And eventually become light-saturated (e.g., to the right of the 2nd hatched line).

While all plants respond according to these characteristic LRC trends, the actual shape of the LRC depends on the plant species (and cultivar), the plant’s light history, and many environmental parameters. Further, the magnitude of plant light responses are strongly dependent on the focus level of the measurements (i.e., single leaf vs. whole plant vs. entire crop canopy) and when in the production cycle they are made.

Some legacy studies have modeled the photosynthetic responses of single cannabis leaves to light intensity, although the plants were in the vegetative phase and their light-histories were unknown. Others have evaluated cannabis bud yield under a narrow range of discreet light levels, but lighting was characterized according to installed power density of electric lighting rather than canopy light exposure. While there has been broad utilization of these studies’ results within the commercial cannabis industry, the comprehensive modeling of both cannabis’ photosynthesis and yield responses to a broad range of light levels has been missing.

The highest point on the linear phase of the LRC (known as maximum quantum efficiency, indicated by the red arrow) is a light intensity target for production environments. In theory, this light level should return high yields while the efficiency of lighting inputs is still maximized. Supplying light levels below this target will tend to result in suboptimal yields while light levels above this target may increase overall yield, but at exponentially higher costs in terms of equipment and electricity. That’s why we set out to model the temporal dynamics of leaf-level photosynthesis and whole-plant yield and quality responses by growing cannabis under a very broad range of canopy light intensities. These models will allow cultivators to set an optimal light intensity for their production goals; and adjust other input parameters (e.g. water, nutrients and CO2) as required. 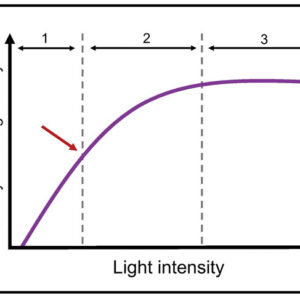 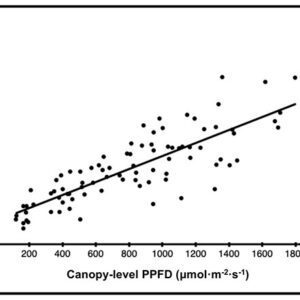 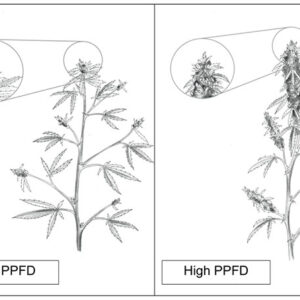 Surprising outcome: adding to the uniqueness of cannabis
We evaluated a range of light intensities (that spanned beyond the lower and upper limits of practical light levels used in production during the flowering photoperiod) on physiology, morphology, yield, and quality (12 hr/day light) of a CBD-dominant cannabis cultivar grown under 100% LED lighting in an indoor cultivation system.

We found that there was huge varibility in leaf photosynthetic responses in terms of the age of the leaves measured, their light exposure level, and the growth stage of the plant. For example, the light saturation level vary by about 10-times, depending on these factors. Therefore, it is impossible to extrapolate leaf-level photosythesis to predict crop yield under different light levels.

Current cannabis production guides typically recommend light intensities during the flowering phase ranging between 600 and 800 μmol·m−2·s−1, meaning that cultivators could be leaving bud yield on the floor. While it certainly costs more in energy and lighting infrastructure to elevate the light intensity, the presence of other fixed costs associated with production (e.g., property tax, building and land lease rates, etc.) may make it economically feasible to increase production throughput by utilizing higher light intensities.

The illustration in Figure 3 clearly demonstrates the impacts that higher light intensity has on cannabis morphology, including shorter nodes (more branches), smaller fan leaves, higher bud yield density and increased size of the cola (highlighted in the circles). Also more appealing is the relative reduction in size of the sugar leaves, which have lower potency than the bud tissue. Additionally, we found that as we increased light intensity, the ratio of bud to total aboveground biomass increased. These morpholoical attributes promoted by higher light levels could also facilitate harvesting, since the buds would be easier to sort and there would be less unmarketable biomass to discard. 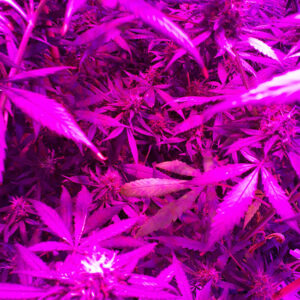 ABOVE Current cannabis production guides typically recommend light intensities during the flowering phase ranging between 600 and 800 μmol·m−2·s−1, meaning that cultivators could be leaving bud yield on the floor. 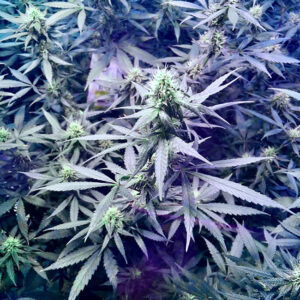 Leveraging cannabis yield and quality within practical limitations
While the higher light levels seem to improve cannabis production tremendously, there are some other factors to consider.  Growers may also encounter infrastructure limitations when it comes to increasing light intensity. There may be ways to increase canopy PPFD within a current cultivation system by adjusting fixture positions and minimizing light wastage (i.e., light that does not reach the crop). However, practically speaking, significant increases in light intensity will necessitate the (costly) installation of additional lighting and electrical infrastructure. Keep in mind that even though the yield responds to increasing light intensity linearly (Figure 2), doubling the light intensity does not double the yield. Growers can use these results to help them strike the balance between the benefits of increased floral yield and the costs associated with increasing light intensity that makes most sense for their business. Of course, under different growing conditions or using different cannabis strains, doubling light intensity could double or even increase more of the yield.

Further research should evaluate the effects of light intensity on different cultivars with various cannabinoid profiles, specifically high THC cultivars. Growers that are focused on innovation can use this research as a guide to identify their own cultivar specific optimal light intensities.

This article is the second of a two-part series that summarizes the results of experiments that were conducted as part of Victoria’s M.Sc. study at the University of Guelph, School of Environmental Sciences. More detailed results of this study have been published in the open-source scientific journal Frontiers in Plant Science. This manuscript is available to anyone using the following weblink: https://www.frontiersin.org/articles/10.3389/fpls.2021.646020/full

Victoria Rodriguez Morrison is a technical coordinator at Master Plant-Prod Inc. Dave Llewellyn is a research associate, and Youbin Zheng, PhD, is a professor at the University of Guelph.