A picturesque village in Central Queens County, Prince Edward Island,
Hunter River has all the amenities that rural villages require. 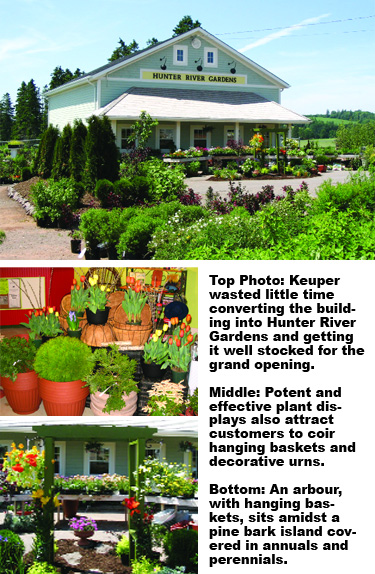 A picturesque village in Central Queens County, Prince Edward Island, Hunter River has all the amenities that rural villages require.

Situated about halfway between the cities of Charlottetown and Summerside on Highway 2, it could be said that this highway is the second “most travelled” on the Island. This well-travelled highway seemed the perfect place for a new business when John Keuper was looking to expand his operation.
Early in 2006, when this eastern P.E.I. greenhouse operator saw an existing garden centre go up for sale, literally in the centre of Hunter River. In terms of traffic, he says it offered “an opportunity to get in front of more consumers.”

Keuper’s main business is Island Pride Farms, a five-greenhouse operation in Wood Islands. After 20 years in the business he sees a change afoot in the more rural areas of the Island. His plan was to offset the slowdown in traffic in his neck of the woods by moving some of his stock into a higher traffic area.

“We’ve always had a big following of customers across the Island, and some of them have always made an annual trip to Wood Islands,” says Keuper. But with the high cost of gas, his customers are not willing to drive as far. Now with a garden centre in Hunter River he believes there is a greater potential to move more of the stock he produces in Wood Islands.

Never afraid to travel across the Island to deliver perennials, annuals and nursery stock, Keuper has customers like the Cornwall Save Easy, just west of Charlottetown, who rely on him to keep their storefront stocked from spring until the poinsettias start arriving in December. Hence, keeping his own new garden centre well stocked is as simple as filling his van in Wood Islands and driving the one-hour-plus to Hunter River and unloading.

Opening Hunter River Gardens (garden centre) in May of 2006, Keuper says local people in this village of 354 residents, and those in the many surrounding rural communities, were enthused about having local access to annuals, perennials, shrubs and trees. “I see a greater influence in buying locally, and if that continues it will be good (for the new location).”

Keuper says his goal has always been to provide healthy plants for healthy gardens. To do this he works hard at growing everything he sells, and Keuper’s customer service does not end with the sale. His 20-year background in horticulture allows him to solve plant problems on site.

He has advice on where to plant and how to maintain the health of those plants, and he will even dig and plant in some cases. “Big box stores that set up garden centres cannot give what we have to offer. Customers have to rely on reading the tag.” He adds that he can tell a customer how much sun a plant needs, how much water or how big it will grow. “We can offer all those kinds of things to our customers and there is a lot of value in those services.”

Keuper also appreciates that people like to get out into the dirt and do all the digging and planting themselves. “I believe gardening is growing with all the retiring baby boomers. In communities like Hunter River, our garden centre can supply a variety of services that may not already be available.” Just like other garden centres, Keuper offers an array of garden tools and seeds, lawn ornaments, fountains and decorative fencing.

Surrounding the building is a profusion of colourful plant life to choose from. Inside there is a definite old country style to the garden centre interior that invites customers to take a second look. Upon entering the building customers are greeted by a tiny waterfall fashioned out of an old water tap attached to a weathered watering can. Rough hewn but comfortable-looking twig furniture is placed about the interior along with outdoor wooden lawn chairs to entice customers to rest a while and read some of the gardening magazines in the twig rack. Some weavings and other crafts throughout the garden centre interior depict the many areas of interest garden centres are cautiously moving toward within a competitive environment.

Assessing the first year that is now behind him, Keuper can see where he may have to increase advertising. “Some people didn’t realize we were there and I guess it’s a matter of me pounding the drums a little more.” Nevertheless, he believes the Hunter River location is a good one.

Officially named in the year 1777, the Village of Hunter River is located on one of the main thoroughfares to Cavendish National Park and the Boardwalk Shopping Centre. Thus, the May opening at the garden centre allowed Keuper ample opportunity to influence the floral buying habits of the tourist operations that generally open late June.

Places like bed and breakfasts, cottages, cabins and century-old country inns bank on their outward appearances to draw “walk-in” clients. They also strive to keep the interiors well influenced by blooming potted plants and cut flowers.

With that in mind, you can bet Keuper is banking on some new business at Hunter River Gardens this summer. When more people like tourist operators and other business owners in the village become aware of the presence of this full-service garden centre in their midst, traffic coming off the road will increase as warmer weather unfolds.

Related
THE EFFECTIVENESS OF RETAIL SHOW GARDENS
From the Editor: How good is your customer service?
ABCs of QR codes
Growing Your Vertical Garden Department