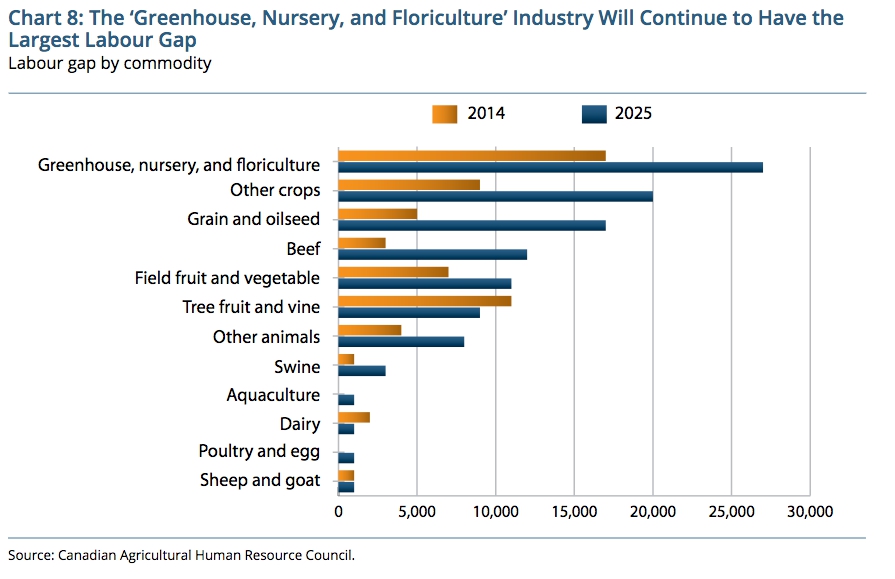 The research revealed that in 2014, horticulture accounted for 107,700 jobs. However, an additional 5,800 jobs went unfilled as a result of domestic labour shortages, and these shortages cost $353 million in lost sales. As horticulture’s labour issues worsen, those costs are likely to rise.

All three commodity groups share common characteristics, including a highly seasonal and labour-intensive work environment that creates a high dependency on foreign workers. In fact, these three industries account for nearly three-quarters of all foreign workers in the entire agriculture sector, despite only accounting for roughly one-quarter of its domestic workforce.

In 2014, approximately one in three horticultural workers was foreign, and the reliance on foreign workers is expected to grow as these industries face a growing need for labour and a shrinking domestic supply of workers.

Key factors affecting horticulture’s increasing dependency on foreign labour over the next 10 years include a high rate of retirement among current domestic workers, a lack of domestic workers with the needed skills and experience, negative industry perceptions among domestic workers, and the tendency of horticultural operations to be located in rural areas where housing and transportation pose challenges to workers.

To address the labour issues identified in the research, CAHRC, with the help of the federal government, has developed agriculture-specific human resource (HR) tools designed to support modern farm operations to manage their workforce.

CAHRC offers Agri Skills, online and in-person training programs, and the Agri HR Toolkit – an online resource guide and templates to address the HR needs of any business.

For agricultural organizations there are customized labour issues briefings that apply the new research to specific commodities and provinces, to explore the labour implications within their specific area. For more information on these and other CAHRC offerings visit www.cahrc-ccrha.ca.

The Horticulture labour market forecast to 2025 reports can be downloaded at http://www.cahrc-ccrha.ca/agriLMI.ca. The study data was validated through industry consultations conducted Canada-wide including: 1034 surveys of employers, workers and industry stakeholders; 80 phone interviews; six focus groups for a total of more than 100 participants; and seven webinars focused on specific commodity groups with 100 participants in total.

The LMI research was funded in part by the Government of Canada’s Sectoral Initiatives Program.

The Canadian Agricultural Human Resource Council (CAHRC) is a national, non-profit organization focused on addressing human resource issues facing agricultural businesses across Canada. Industry participation is the cornerstone of CAHRC, working with agriculture industry leaders, governments and educational stakeholders to research develop and communicate solutions to the challenges in employment and skills development in the agriculture industry. CAHRC leads collaborative implementation efforts in support of the Canadian Agriculture and Agri-Food Workforce Action Plan for the sector. For more information visit www.cahrc-ccrha.ca.