A great season… or was it?  Things went well for many growers and retailers, but let’s not go overboard with larger ’08 crops 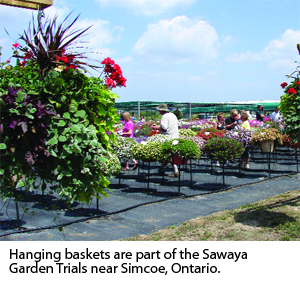 Generally speaking, for most of the growers with an existing customer base, they did quite well. It was probably the best season in the last seven years.

For those growing on speculation, it was their best spring in three or four years, though not by much. And this is because the days of growing on speculation are over, largely because most of the large chains and garden centres have pre-booked programs, working with specific growers and specific containers and product mix. The ability to speculate on filling the vacuum with the right product is almost impossible.

Competition at the chain level is increasing, resulting in programs among these retailers looking pretty much the same. The product mix is of a higher quality at most stores. However, they’re all chasing the same customer – gardeners who are still buying about the same amount of plant material as they have done the past few years.

This raises the question: are we at the point of retail overload with not enough customers to go around? Maybe this is a good time for breeders, brokers, growers and retailers to work together to increase the customer base. In a sense, we are one big supply chain; the success of one is the success of all!

I’ve found the product mix is changing at a rapid pace. New and proven varieties are taking hold. The older, more traditional varieties are being overtaken, which is a good thing, because this is what the customer wants.

The more successful stores and garden centres are those with buyers who are open-minded. They are listening to their customers and are always ready to try new plant selections.

In my 28 years in this industry, I’ve found many buyers insisting on having a dracaena (spike) in a geranium or New Guinea hanging basket. But is this what the customer wants, or what he or she needs, for gardening success?

We have started doing our own trials with these combinations in the greenhouse and garden. Here are some of my observations.

• A geranium hanging basket that is fertilized regularly and watered adequately looked great.

• An ageratum basket without a spike, but which was well fertilized and watered, look great, too.

• The combination of a spike and geraniums that was somewhat under-fertilized and insufficiently watered was almost dead, though the spike looked good. At the same time, similarly cared for geranium hanging baskets that didn’t have a spike looked good.

Let’s look at this at the consumer level. The water supply to the plants can  be interrupted or delayed at any time, and the only thing that will survive is the spike since it is the dominant plant. This is why consumers want the spike with geraniums because in their mind, at least they will have the spike. What they don’t know is that if they have geranium containers without spikes, the geraniums have a better chance of surviving any interrupted supply of water because they don’t have competition from the spike. This is a rather long explanation of how we as growers or buyers go along with tradition in how we plant up containers, rather than working to deal with potential consumer concerns. A spike did not solve the problem. The consumer wants geraniums that last for a while, and not a spike that can aggravate problems.

Our industry is like the car company that has an inferior brake system, but continues to produce the same car, only with more horsepower each year!

This past spring featured excellent weather for growing and sales. Even though most of the chains had limited shrinkage, they weren’t happy because they want higher margins by selling more product.

You don’t have to be a financial wizard to figure out that when supply is much more than demand, the margins are lower. You can never make up the shortfall by increasing sales when the consumer base has remained constant over the past few years and every retailer is competing for the same consumer group.

One possible remedy is to increase prices and provide upgraded products, things not easy to do in an over-supplied free market. However, the more logical solution is to promote horticulture and work on increasing the consumer base!

Another observation from this past spring was that growers who are still using old varieties or are still working with the 12-0-4 flat, and who have not yet added containers to their product mix, had a very difficult time cleaning up.

As hot as mixed containers are in the market, they really catch fire when you include a tropical plant. The 2008 Sawaya Garden Trials will include tropicals in many mixes and alone.

Plants that attract birds are soaring in the market, especially if they are marketed that way.

With containers, mixes and quality are essential ingredients for excellent sales. But without proper plant maintenance throughout the supply chain, we fail to capitalize on these advantages. Consumers won’t buy sickly looking plants.

One sure-fire way to increase sales is to improve your service levels. This alone can increase sales by 25 to 30 per cent, and possibly by 50 per cent. It’s especially important if your goal is repeat customers. Good prices can attract customers, but good service will keep them coming back.

• Soil mixes with different soil pH for different crops were quite beneficial. This proves that preventing a problem is much easier than correcting it! Low pH for petunias, snaps, vinca, among others, and higher pH for geraniums, marigold and pentas helps avoid most growing problems. It’s much easier to grow a crop that is in the media that it requires.

• Growers who did their homework and visited garden trials and checked different variety comparisons, instead of simply getting the cheapest or most convenient varieties, ended up with fewer production problems. Not all varieties are the same, and there are indeed better varieties in every crop.

• Planned programs of planting time and culture always resulted in better quality crops, especially when things were done on time.

• Growers who calculated their area and grew only what comfortably fit in that space without overcrowding their plants spent much less time on labour and also grew a better quality product.

• Growers who provided the required environmental conditions for their plants ended up with plants that sold on time.
However, others who tried to save on energy missed selling dates and had to sell at reduced prices to unsatisfied customers.

More growers are using biologicals for pest control with good success, especially in early crop stages, such as propagation or before spacing.

Shipping and labour costs were lower than other years due to a steady flow of products. There was not much down time because of bad weather, and the season did not drag on.

Ontario ’07 season recap
Generally speaking, it was a very good season because of a number of factors.
• Good weather
• Industry is more in tune with consumer demands
• Highly fine-tuned programs
• Growers are supplying products based on sales history, and not just to fill the stores
• Larger packs were grown
• More large containers were grown, which meant fewer units for sale because it takes a larger area for growing compared to a 12-0-4 flat.
• Last, but not least, I think it is important to grow only what is ordered. Make sure it fits into your production schedule without overlapping schedules, or that it prevents you from providing the crop with the right space.

Looking ahead to 2008
After this quick recap of the 2007 season, what should we do to help ensure an even more successful season next year?

One: Determine what was your biggest mistake from this past season, and then outline ways to avoid repeating it. Being aware of any problem means we can plan to avoid it next year well before the season begins.

Two: Determine the greatest successes, and expand and capitalize upon them within reason.

Three: If you deal with a number of customers, identify the 3-4 per cent of them who require 90 per cent of your effort and yet only buy 10 per cent. Try to talk them into following your normal production, shipping and selection procedures, or wean them out as soon as you can replace their volume with your other clients (or with new customers).

Four: Communicate your ideas with your customers and get them involved in the decisions you make with respect to product mix, packaging and shipping. Listen to their concerns and come to a workable plan. Learn to compromise, but don’t be a pushover!

Five: Learn about the new trends, colours and social buzzwords and start including them into your programs. For example, for the next five to 10 years, the horticulture themes and concepts will include being green, natural, recyclable and having a positive environmental impact. The buzzword is sustainability. This theme is being discussed and highlighted in talks, magazine features and conferences, and we will try to stay on top of all the latest developments, especially those requiring 20 per cent effort but having 80 per cent impact.

Seven: And last, but not least, if you had a good bedding plant season this year, do not simply increase production. Economics is all about supply and demand. While good weather enhances the demand side, increasing production will easily tip the balance towards supply. This will mean we will either be stuck with some product, or the prices will be driven down.

Our choice is to either think of the good of the industry and see the big picture of plant pricing and sales, or be selfish and short-sighted. This is a small industry, and every little decision by one operator affects many others. You can’t blame anyone else; you have complete control.

Good days are here. Let’s work together to make them better.