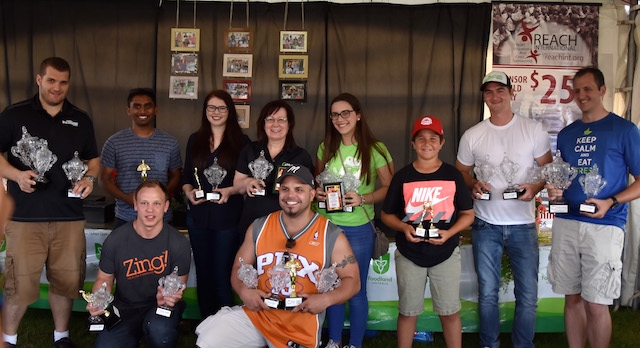 June 20, 2017, Leamington, Ont. – This past weekend during the Leamington Fair, REACH International hosted its 10th annual greenhouse competitions in “The Hottest Tomato,” “The Perfect Pepper” and “The Coolest Cucumber” categories.

Ontario growers and marketers entered their premium produce into the competitions which celebrate Essex County as being host to the largest greenhouse industry in North America.

You wouldn’t naturally associate greenhouses with international child sponsorships but that’s exactly what’s happened. REACH International, the Canadian registered child-sponsorship charity, run completely by local volunteers, has been hosting an annual event that both celebrates the region’s greenhouse fame while sponsoring some of the poorest children and families in the world.

Special thanks to Red Sun Farms for their Farm Level sponsorship. The net proceeds from this event will be used for the charity’s main project in Uganda.

Loyalty Awards were given to Mucci Farms, St. Clair College, Mastronardi Produce, Westmoreland/Topline Farms and Pure Hothouse Foods for supporting the competition every year for the last 10 years. A clean water source will be built in Uganda in the upcoming year displaying their names.

OMAFRA greenhouse vegetable specialist Shalin Khosla received an appreciation award for his work as head judge. He developed the judging criteria has volunteered his time every year since 2007.

This year’s category winners include: