Dream of Institute for Sustainable Horticulture quickly becoming a reality 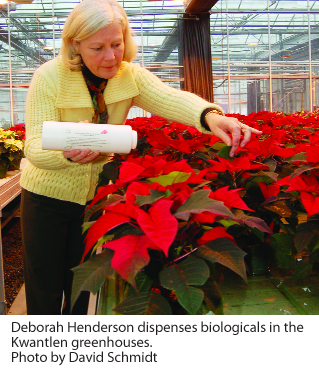 The green – a lot of green – is being put into greenhouse research in British Columbia.

The Canadian Foundation for Innovation (a federal government foundation which funds research facilities at Canadian colleges and universities) awarded just over $2.2 million to the Institute for Sustainable Horticulture at Kwantlen University College in Langley, B.C.

Kwantlen horticulture professor Jim Matteoni began the ISH in 2004 as an adjunct to Kwantlen’s School of Horticulture. The school, which has an associate dean (David Davidson) and 15 faculty members, already trains more people for horticulture than any other post-secondary institution in the province.

However, to date, the ISH has been little more than a dream. After Matteoni stepped down as ISH director for health reasons, Deborah Henderson took over as its part-time director and Leading Edge Endowment Fund chair designate.

“My job is to build research programs in horticulture,” Henderson explains.

“The CFI award is a huge step for us,” Henderson said. “Kwantlen had no research facilities and no previous experience with CFI, so our application was a long shot.”

The provincial government is expected to match the CFI funding through the B.C. Knowledge Development Fund, but that announcement is not expected until spring. Add another $200,00 already received from Western Economic Diversification Canada for growth chambers and other equipment, and Kwantlen is close to achieving its capital funding target.

The province has also committed $1.25 million for the LEEF chair, providing Kwantlen raises the other $1.25 million (they have raised $200,000 to date). CFI has promised to kick in another $600,000 for operating funds, so the “greenbacks” are well on their way.

The CFI capital funding is intended for a 430-square-metre bio-control product development laboratory building and a 500-square-metre geothermally heated research greenhouse to complement Kwantlen’s existing 1,500-square-metre teaching greenhouse. It could take up to 30 months to build the new facilities, partly because a specific site has not even been selected yet, and partly because skilled tradesmen are difficult to get in B.C.’s construction boom.

The facilities are also going to be green. The greenhouse will use well-based geothermal heating instead of conventional boiler heating, allowing researchers to advance climate control applications for a closed system.

“Climate control is a real challenge,” Henderson admits, noting geothermal heating is still not common in greenhouses. “This is an opportunity for us to be innovative.”

She also hopes to cover the lab building with a “green” roof, saying “Kwantlen has done a lot of work in environmental and energy sustainability, so this would be appropriate. We want to make this a LEED-platinum rated facility (LEED is a North American rating system for so-called green buildings). This will be so energy-efficient, it will be suitable for a ‘sustainable’ institute.”

Finally, the program will concentrate on “green” research into new production systems and new crops for green energy greenhouses and development of new biocontrols for indoor and outdoor horticultural crops.
This is Henderson’s particular field of expertise, having spent the past 18 years, not as an academic, but as a hands-on integrated pest management consultant.

“Very few people knew what IPM was and I started with just three potato growers,” she notes, saying B.C. has since become an international leader in IPM in the private sector, particularly among greenhouse vegetable, potato, field crop, and cranberry growers. The province also has two major commercial producers of bio-control products.

Her own company, E.S. Cropconsult, has mirrored that growth and now includes a half-dozen full-time staff and up to 30 seasonal workers. However, overall industry uptake of IPM still lags due both to a lack of understanding of IPM techniques (“with IPM, you need to work smarter than with pesticides”) and a lack of products (“there is a real bottleneck in getting products out to growers”).

She joined ISH to help correct both shortcomings. “I needed to move to a place where I could support (her IPM trainees) more. I can do more by enabling other people.”

She hopes to use the labs to develop more bioproducts and the greenhouses to study their effectiveness, insisting the focus will be on applied research.

“We’re going to be researchers who understand farming,” saying ISH will rely heavily on the province’s IPM consultant network to both determine what industry needs and to field test new options.

“We have to be multi-stakeholder from the beginning,” Henderson states. “For IPM research to be effective, we have to go from the bottom up. We have to start in the field or the greenhouse by asking what is needed to control a particular pest or disease, then make sure it can be produced commercially. If IPM solutions cost more, they won’t be purchased.”

Henderson notes the ISH’s goal is to become an internationally respected regional centre for research and innovation in integrated pest management in both greenhouse and field horticulture production.

“The local industry is very positive,” she says, saying the centre has strong support from three of the province’s major horticulture commodity groups: the B.C. Greenhouse Growers Association, the B.C. Landscape & Nursery Association, and the United Flower Growers Co-op.