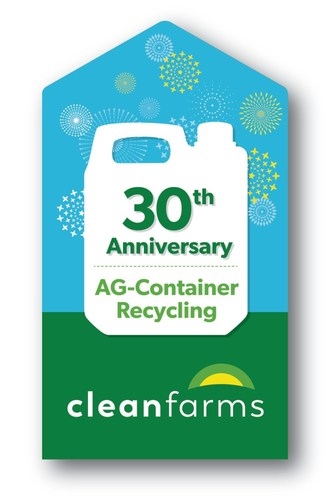 Thirty years ago, the crop protection industry in Canada planted the seeds of a voluntary stewardship program in Prairie communities to collect empty agricultural plastic jugs for recycling. The idea took root and since then, Cleanfarms has expanded the program across Canada bringing in a total of about 126 million plastic jugs that have been recycled into new products instead of disposed in landfill.

During Earth Week, April 22 to 28, Cleanfarms is celebrating the 30th anniversary of collecting plastic jugs 23L and under for recycling. As this foundational agricultural waste collection program grew, it cleared the path for Cleanfarms to introduce a broader range of programs to collect plastic farm waste materials such as empty seed, fertilizer and pesticide bags; silage wrap; large pesticide and fertilizer drums and totes; twine; and grain bags.

“We’re excited that we’ve been able to increase the recovery of empty containers thanks to Canadian farmers and more than 1,000 ag-retail and municipal collection sites across the country. In 2018, we recovered nearly 5.8 million containers, a 14% increase by volume over 2017,” said Barry Friesen, Cleanfarms general manager.

Currently, Cleanfarms recovers about 65% of the smaller plastic containers that are placed on the market each year.

“Our success in 2018 set us up to go after 100% recovery to celebrate our 30th anniversary in 2019. We’re asking farmers who use these products to follow best practice and recycle every one of the empty containers when they’re finished with them. It’s a big ask but we know Canadian farmers are keen stewards of their land and are committed to environmental responsibility when it comes to how this packaging is managed,” Friesen said.

2018 Number of Small Plastic Containers 23L and under Recovery for Recycling by Province: