More than just genetic performance, trials reveal how varieties should be used. 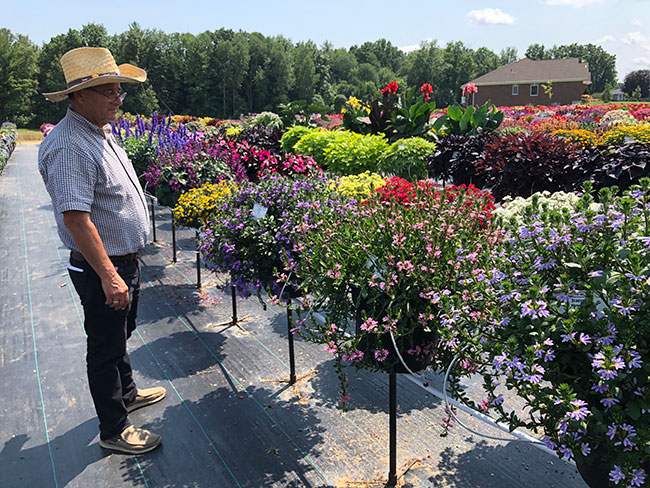 After 21 years of coordinating the Sawaya Garden Trials, you would think you know what to expect.

Attending them, you may see a new colour to replace or add to your products, as well as  varieties with different habits for your mixes. Of course, you also get to see what is new and every year, there is a very large number of new varietal introductions, but there are certain things you learn that you never expected to.

Sometimes, you will be looking at an old variety that existed for many years and you were not aware of their performance. This could be because the company sales representative does not carry it or is not aware of it, so you are missing out on an excellent performing item that could have generated good attention for your business and your customers.

There are some other revelations that you might surprisingly acquire, and we will see that later on. COVID put a damper on these experiences for the last two years, but with our outdoor trials, the virus became only an inconvenience to which everybody graciously adjusted.

There are several important reasons to keep informed about the different cultivars firsthand.

Many recipe combinations look great in the greenhouse, but within two to three weeks, one of the cultivars in the mixes will take over and it ends up being a combination of one cultivar.

Some varieties look great in March and April when it’s cooler, but they still get sold in late May.

Some plants do not show their potential because they are grown in a small container. Considering the vigour of the cultivar, the grower must then apply strong PGRs and often that will put the plant into a coma from which it might wake up in August.

In this first part of my Sawaya Garden Trials coverage, I will share examples with you of the key ideas  just mentioned. These are based on my observations in the greenhouse at springtime, as well as their end result in the actual performance trials. 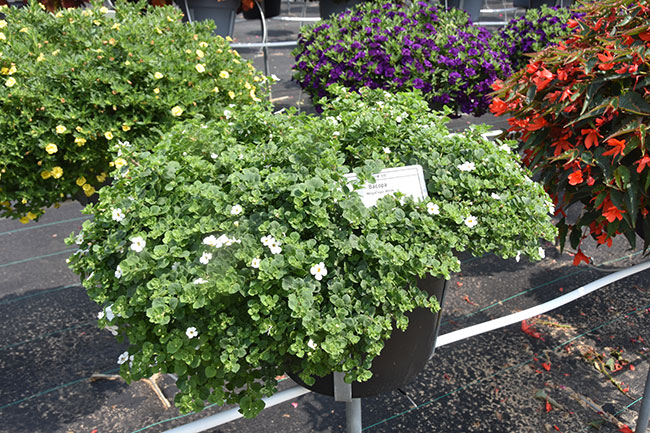 Bacopa MegaCopa White (1) is usually one of the best for flowering through the summer heat, but this past summer, MegaCopa and all the other Bacopas lost their flowers until the nights cooled off towards the end of August. Before it gets hot, Bacopa looks great in the spring, so do we grow plants to sell knowing the consumer is going to be disappointed? Some areas have cooler summers compared to southern Ontario and there Bacopa will do just fine, which proves that you must be aware of your customer’s climate and grow the cultivars that will perform for most of their gardening season. 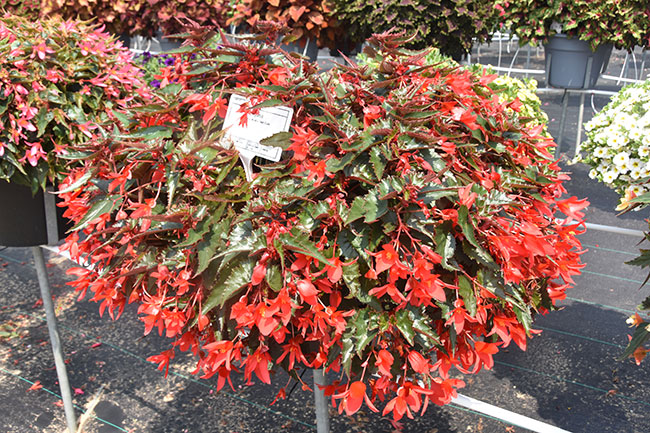 Begonia Mistral Red Dark (2) and most of the vigorous Boliviensis cultivars do not look their best, but when they are out in the summer under full sunlight, they are a breathtaking show. 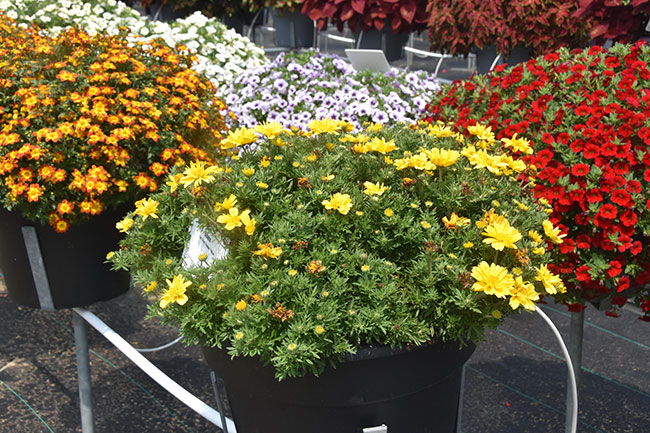 Bidens Sun Drop Double Yellow (3) is great in cool conditions grown individually or in combinations. Even though Sun Drop does better than the other Bidens, the flowers will disappear in the heat of the summer. 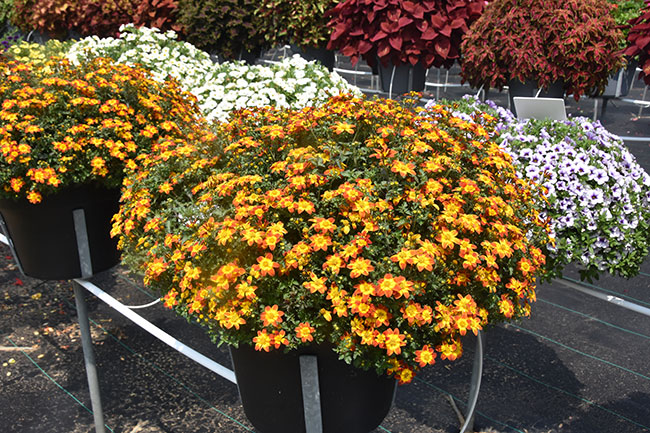 Meanwhile, Bidens Bee Happy Red (4) will look thin while growing in the greenhouse, but when it is exposed to the summer heat, it will flourish with a full body, covered with flowers that will last a long time. 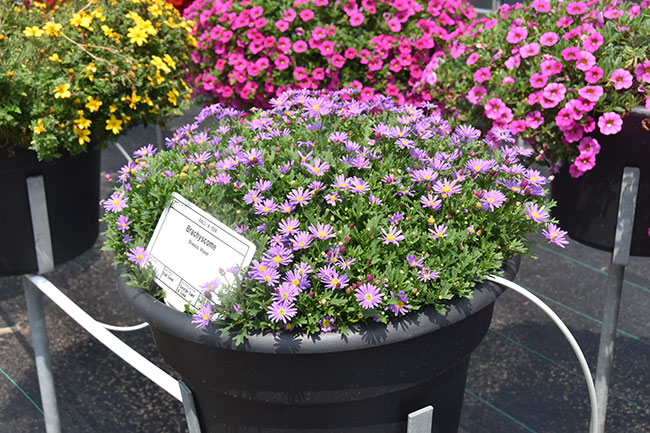 Brachyscome Brasco Violet (5) is a slow grower in the greenhouse, especially in larger pots. But when grown in smaller pots and advertised for rock gardens or garden front edge, it becomes a very sharp choice. It will take the heat and the rain without the need for deadheading. 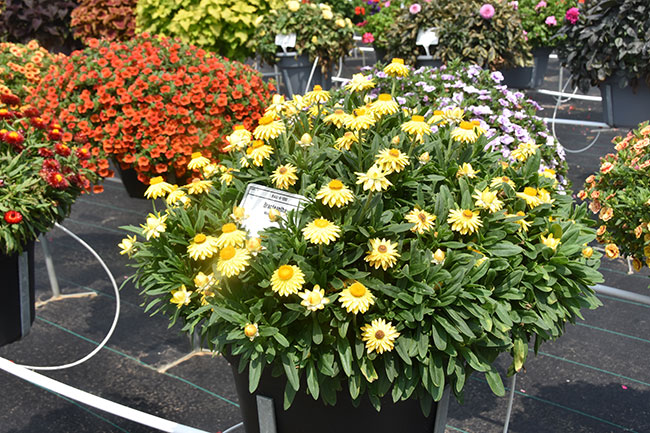 Bracteantha Mohave Yellow (6) was one of the most resilient plants in the trials, but growers had a bad experience with growing Bracteantha due to downy mildew on the old varieties, which has been corrected with new breeding. Growers also used to put three cuttings in a 10” pot or hanging basket where it tends to split. The solution is easy – just use one cutting per pot, which is more economical, and you will get a full pot with flowers that hardly need to be deadheaded. Plus, the rain, wind, and hot or cool weather make it look great. 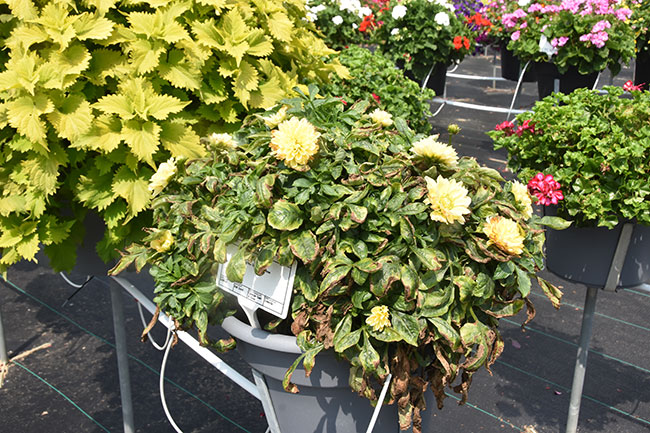 Dahlia City Lights Golden Yellow (7) and almost all begonias look great in the greenhouse, but when they are sold as a patio pot and put on consumer display as is, the summer heat will heat up the root ball and the dahlia will have no chance. In southern Ontario, dahlias are to be sold for landscape and planted in gardens. It can also go in combinations where other plants shade the pot sides or in a pot that is somewhat heat insulated, like moss or fibre baskets. 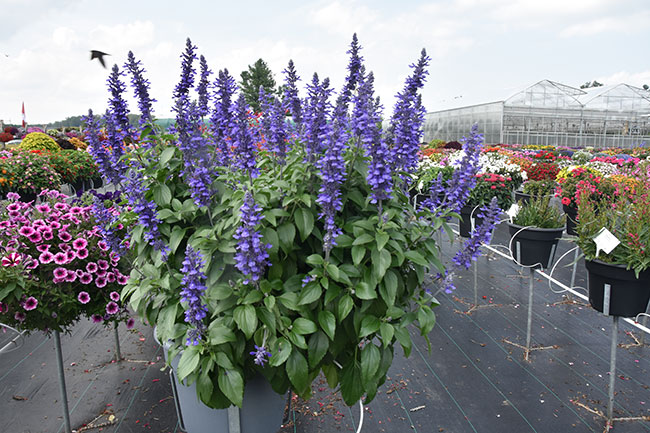 Salvia Mystic Spires (8) is one of my favourite plants for its superb garden performance, and hummingbirds love it. Sales will be much higher if Mystic Spires and varieties like it are grown in larger containers with more growing time so it can show its potential. Likewise, it can also be grown in smaller pots but be given less growing time. 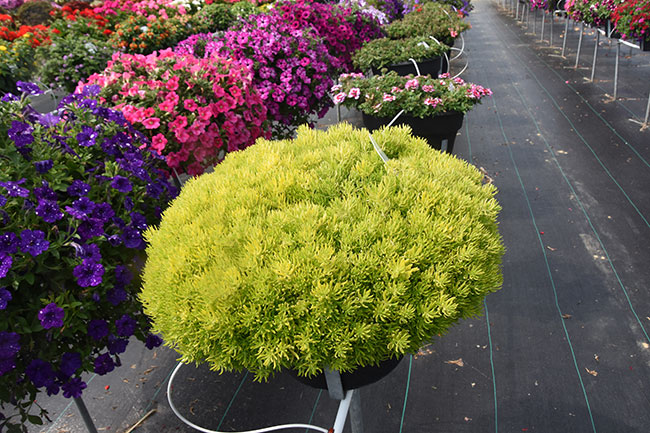 Sedum Gold Mound (9) is like the Mystic Spires-type salvia. It needs a full-grown specimen displayed with the smaller pot sizes. 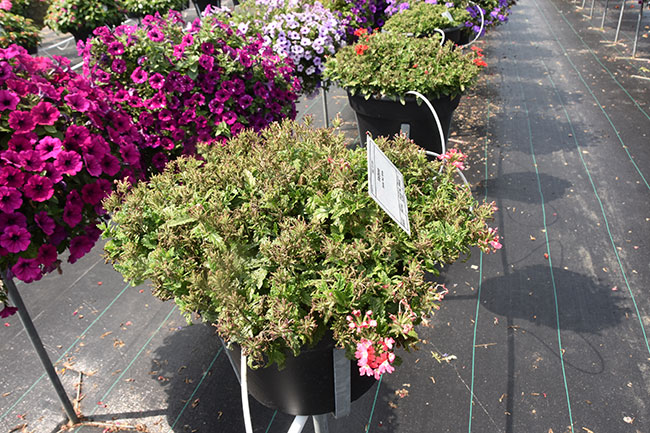 Verbena Beats Red+White (10) like many of the compact verbenas, it looks great at sales if planted and sold on time. But these extremely floriferous cultivars need lots of garden maintenance, and if that does not happen, the plants become less than desirable. 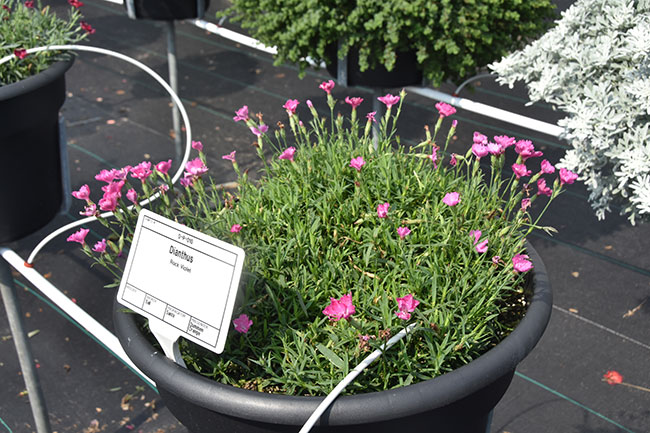 Dianthus Rock Violet (11) is another cool crop that looks great but cannot take the heat. It becomes a consumer disappointment if this information is not communicated to them. 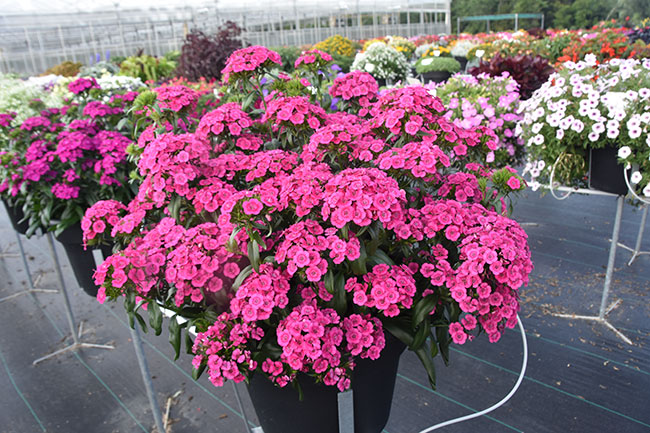 Especially when there are Dianthus varieties that can take the heat like Dianthus Interspecific Jolt Pink (12), which looks good when grown properly and is great in the landscape – hot weather or not. Many species are cross bred to address their garden performance. 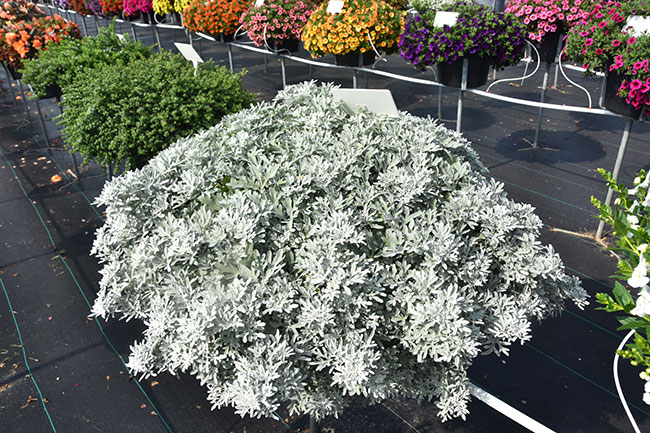 Artemisia FanciFillers Sea Salt (13) is a cultivar that foliage lovers gravitate to when they see the potential. Again, a full-grown plant or picture of a full-grown plant will increase the sales of Artemisia, especially now where many of the consumers are looking for just foliage plants. 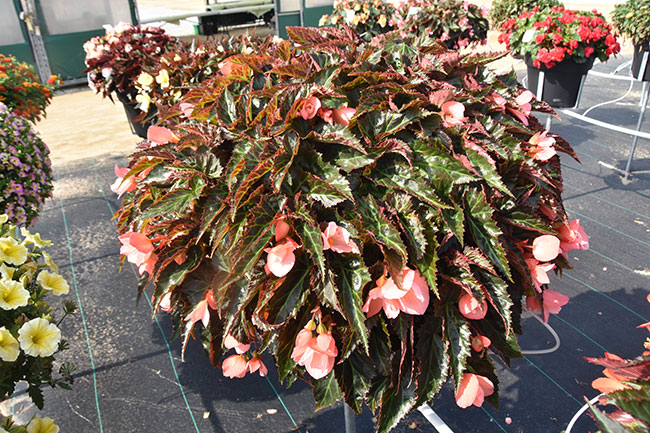 Begonia I’CONIA Upright Salmon (14) is not one of the great shows in the greenhouse due to its poor ability for branching, but it has great garden performance in full sun with full body and flowers. 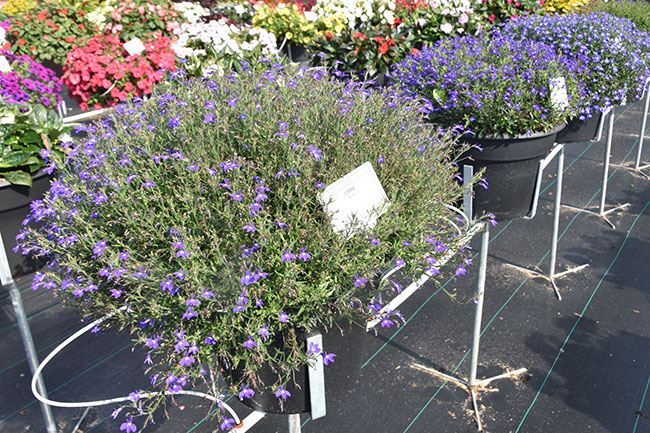 Lobelia Hot Blue (15) is one of the more heat-tolerant lobelias, but it still cannot take the summer heat and will go into a stage of dormancy. If this is one of the better cultivars of the species, why do we grow lobelia for the summer? Lobelia in combinations is great in the greenhouse, but count on it to disappear from the combination in the summer. 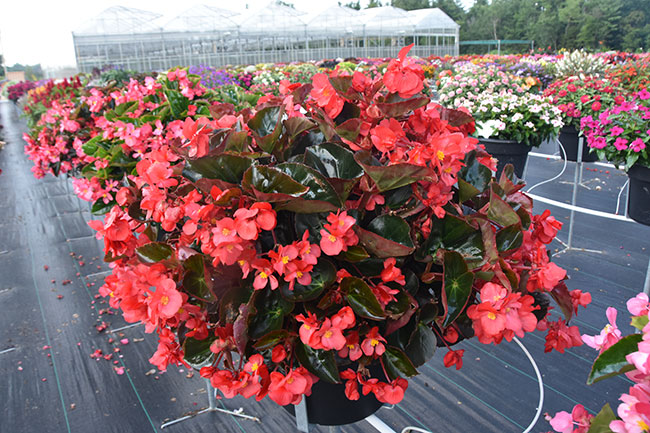 Begonia Megawatt Red Bronze Leaf (16) is one of the many vigorous fibrous begonias on the market, but the consumer is still not aware of their potential. Some landscapers are catching on and using it more. And up to this point, fibrous begonia is still labelled as a shade plant. The tags should say it is shade-tolerant and loves the sun and the heat. 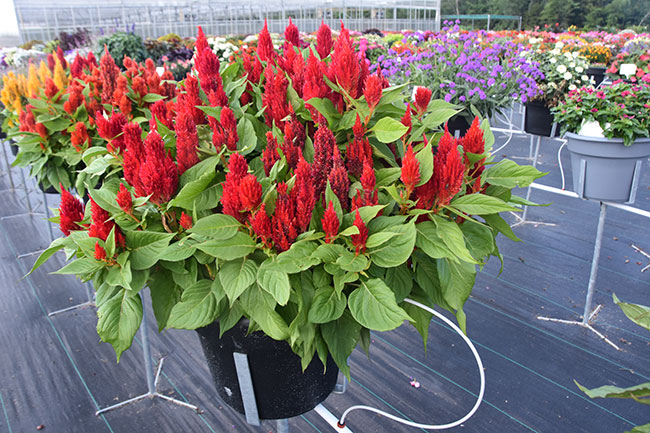 Celosia First Flame Red (17) is a plumed type flowering celosia that will perform great when it is started under long days so it will have the vegetative vigour to put on a great display in the garden. 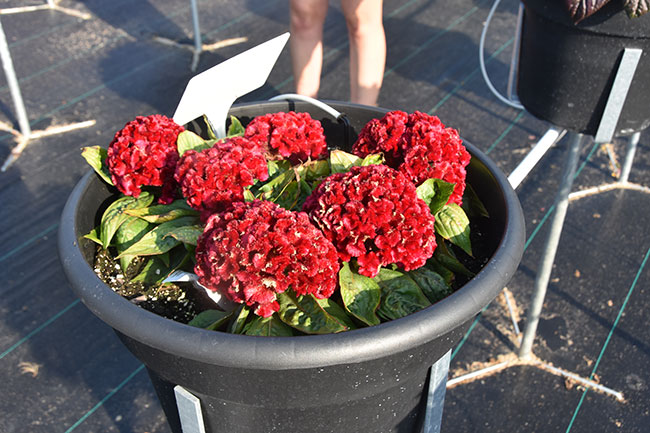 This is true for the spike and the crested types too, like Celosia cristata Brainiac Robo Red (18). Because these are facultative short-day plants, they need to be started under long days to get the maximum effect. 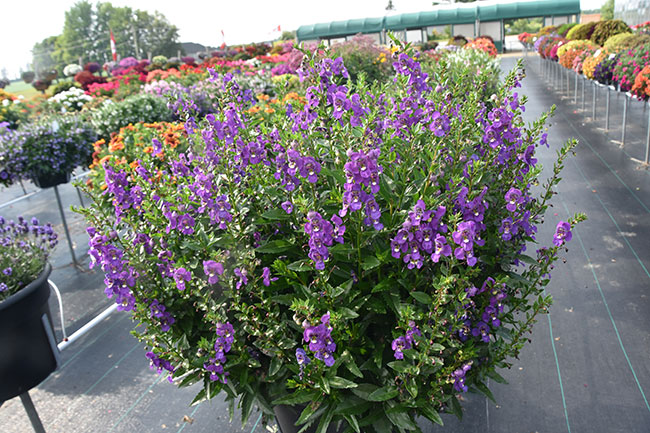 Angelonia Aria Alta Purple (19) is one of many great cultivars among the Angelonia species. A great plant for the landscape that thrives in the heat, unfortunately early May could bring cool weather where Angelonia does not do well. If grown in a gallon or larger pot to be sold in late May or early June, Angelonias would work well for landscape or larger containers as patio pots where customers will get to see and enjoy one of the great summer species. The common name for Angelonia is summer snapdragon for a reason. 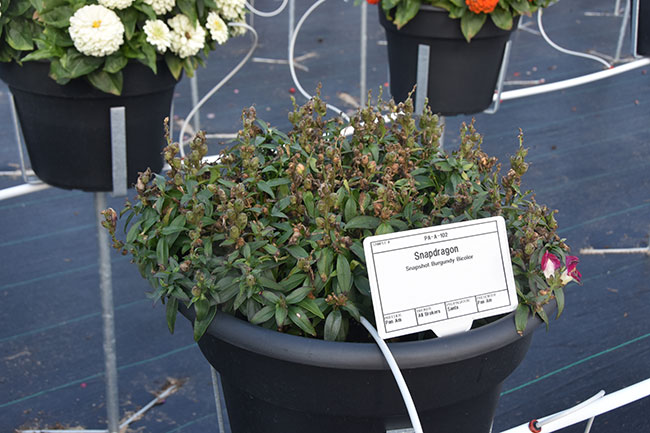 In contrast, Snapdragon Snapshot Burgundy Bicolor (20) is one cultivar of snapdragon (Antirrhinum) that is not for the summer. 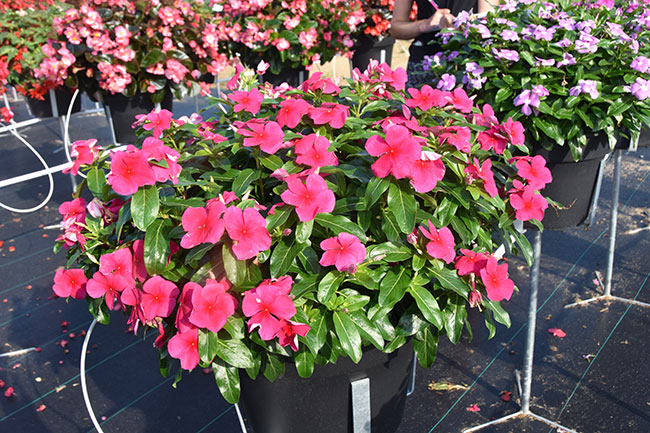 Vinca F1 Valiant Punch (21) is heat loving with F1 breeding that is resistant to diseases. This should be the number one bedding plant as it flourishes during the summer with loads of flowers. And yes, Ontario summers are very hot and that suits Vincas very well. 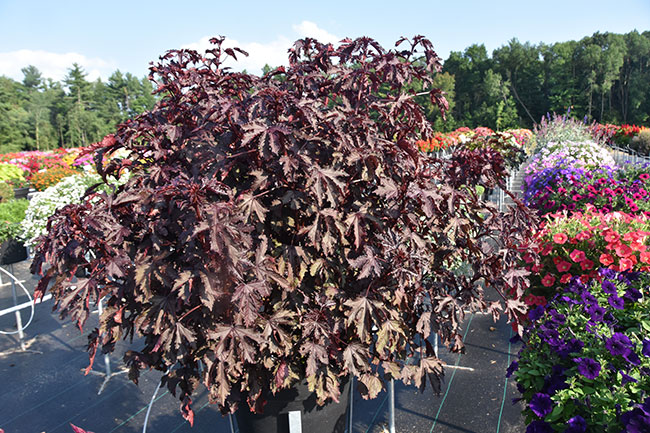 Fantastic Foliage Hibiscus Mahogany Splendor (22) is a hibiscus that is mainly grown for its foliage from seed. It makes an excellent center piece for planters or grown alone in gallons, but no smaller for landscape as centers or back planting for plant stepping design. 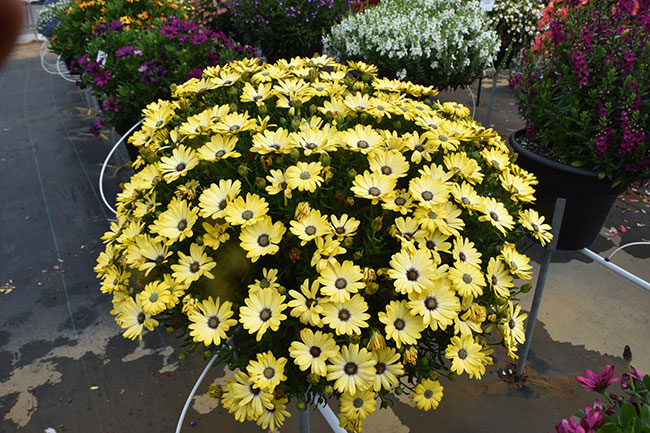 Osteospermum ecklonis Tradewinds Lemon Zest (23) is one cultivar of a species that has had a major transformation in the last 10 years. Many cultivars of this species flower through the whole summer, but since the early varieties were sold only as cool crops, that is why consumers have not bought it past Mother’s Day.

As you can see from these few examples, lots can be learned from following the plant from growth to garden performance. Using trials, and not show gardens, we can grow cultivars where the consumer will have a better chance at being successful and because of that, the ornamental industry will flourish.

This year, we started a new points-based grading system of the cultivars. Criteria include quality and performance of the starting plant materials, at point of purchase, performance in the trial gardens and more. In part two of my Sawaya Garden Trials’ coverage, I will share with you as many highly rated varieties as possible.

Melhem Sawaya of Focus Greenhouse Management is a consultant and research coordinator to the horticultural industry. He can be reached at mel@focusgreenhousemanagement.com.