March 15, 2013, Naaldwijk, the Netherlands — Some  4,000 people attended
the spring edition of FloraHolland’s Trade Fair, about the same number
as last year.

March 15, 2013, Naaldwijk, the Netherlands — Some  4,000 people attended the spring edition of FloraHolland’s Trade Fair, about the same number as last year.

More than 550 growers presented their cut flowers, green and flowering house plants and outdoor plants. Presented were a varied assortment of new products and concepts. 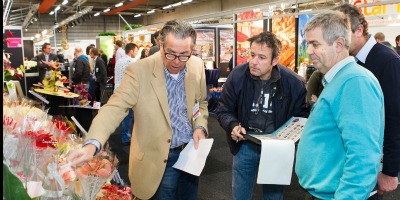 New for 2013 was the Inspiration Plaza for Bedding Plants, put together by the growers of these plants in concert with FloraHolland.

Visitors to this plaza were shown some surprisingly innovative shop floor configurations for bedding plants. The idea behind this plaza is to boost the rate of bedding plant sales in stores by presenting them in an inspiring way on shop floors.

PREPARING FOR THIS YEAR’S AALSMEER SHOW

Plans are underway for the FloraHolland Trade Fair and the International Horti Fair in Aalsmeer (Nov. 6-8). Visitors will benefit from both of these events being held under one roof at the same time, hosted by FloraHolland.

In this way, the Horti Fair and the FloraHolland Trade Fair will offer an integrated solution to exhibitors and visitors. The bundling under one roof really means one-stop shopping for visitors without losing valuable travel time.