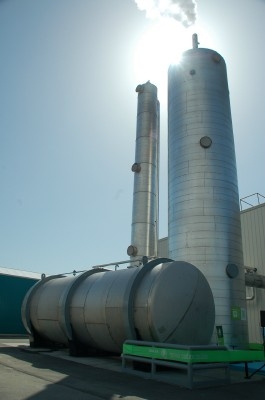 Greenhouse growers have long eyed biomass as a cost-effective “green” alternative to natural gas. Some, like the Krahn family of Sun Select Produce in Delta and Aldergrove, British Columbia, have gone past just eyeing wood, and actually installed wood-burning boilers in their greenhouses.

Using wood instead of natural gas is most appropriate in B.C. Not only do the province’s forests yield a huge supply of wood waste (boilers use a lot of wood – Sun Select burns 75 to 125 tonnes of wood waste/day to heat its 40-acre Delta vegetable greenhouse), but the province’s carbon tax has added to the cost of natural gas (The B.C. government is now rebating that extra cost – $1.3657/gigajoule – to greenhouse growers but the rebate only applies to 2012).

Despite that, two things have hindered the wholesale adoption of biomass boilers in greenhouses.

First, energy specialists say many biomass boilers release more particulates than natural gas boilers. This is a particular concern in a confined air-shed like the Fraser Valley, which already has to cope with heavy pollution from automobiles and has led to strict emission standards for wood boilers.

Second, vegetable growers supplement their environment with carbon dioxide to generate the yields required to make their expensive greenhouses viable. Although growers can buy CO2, the most common and cost-effective way to obtain it is from a boiler, since burning fuel generates CO2 as a “waste” product. Natural gas produces “clean” CO2, which can be easily captured and released in the greenhouse. Unfortunately, CO2 from a wood boiler has been “dirty” and difficult to capture. Until now.

ProSelect Gas Treating Inc., a partnership between Sun Select and Procede BV of the Netherlands, has unveiled the GC6 Carbon Capture System, which they claim is the world’s first carbon capture system for the greenhouse industry.

“It’s an all-in-one solution for the environment and economical for greenhouse growers,” says Reinhold Krahn of Sun Select. “It eliminates emission of pollutants and transforms the captured carbon into food grade CO2.”

Wood waste is burned in a Vincke boiler. The 180 ˚C gas from the burning process goes to a flue where it is filtered and cooled to 60 ˚C, then into an absorption chamber where the CO2 is absorbed by a fully reusable patented organic solvent, which effectively glues itself to the CO2

The remaining vapour, now stripped of its carbon, exits from the top of the column (“don’t call it a smokestack because it’s just harmless vapour,” insists Reinhold’s brother Victor, CEO of ProSelect).

The CO2 is then sent to a desorption column where it is “boiled off” at 120 C and sent to the plants as required. Two computers control the entire system, one at the boiler and the other in the greenhouse.

“It’s really quite simple,” Victor says, “first we absorb the CO2, then we desorb it. We can strip out up to five tonnes of CO2 per hour.”

(Many dignitaries attended the ceremonies launching the Pro Select technology. Reinhold and Victor Kahn of Sun Select are at left.)

“Our goal is to create a sustainable legacy for growers in B.C.,” Reinhold says, pointedly telling Bell, “we hope governments will continue to support this initiative by offering growers incentives to adopt it.”

Adopting it is not a cheap option. Even though development costs are no longer part of the equation, Victor estimates it would cost “about four million dollars” to install a system large enough for a 40-acre greenhouse from scratch. “The cost would be less if you already have a wood boiler and want to retrofit it.”

Despite the cost, the Krahns are now planning to install it at their 30-acre greenhouse in Aldergrove, which already has a wood boiler. The reason? They believe it is cost-effective.

“It reduces our energy and carbon cost by 50 per cent,” Reinhold says. Part of that reduced cost is the carbon credits they will be able to sell, says James Tansey, CEO of Offsetters. A leading provider of carbon-management solutions, Offsetters is working with ProSelect and Sun Select to bundle carbon credits from the new technology.

“I hope this serves as an example for other industries,” Tansey says. “A challenge can be a huge opportunity.”


David Schmidt is a freelance writer and photographer in British Columbia.