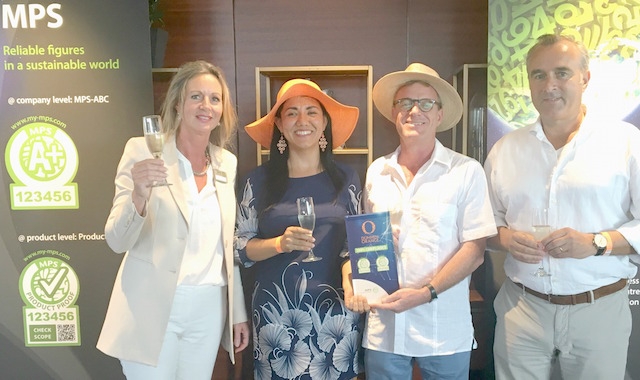 July 24, 2017, Las Mercedes, El Salvador – Dümmen Orange has again been recognized by MPS for a continued dedication to promoting sustainability in the floriculture industry.

Through a deep understanding of environmental impact and the importance of sustainable operations, Dümmen Orange has implemented production best practices within its facilities to meet or exceed MPS standards on environmental and agricultural practices, as well as social responsibility.

During a visit in March 2017, he noted he was “able to see with my own eyes how Las Mercedes is making a difference for families, minority groups and children. It is great to see that during the 2017 audit, the auditor has confirmed a 100 per cent compliance on MPS-GAP and MPS-Socially Qualified requirements at Las Mercedes.”

Carl Kroon, general manager at Las Mercedes, noted that consumers are now “not only interested in the visible and tangible characteristics of the products they buy, they also are concerned with how products are made.

“Dümmen Orange is deeply rooted in our commitment to our people, our values and our planet. The MPS certification helps us demonstrate to our customers that our production methods respect our workers and the environment.”

Below is just a sampling of the wide range of actions Dümmen Orange has taken to exemplify their high standards for excellence.

•    Dümmen Orange has invested in electrostatic spraying equipment for improved penetration of the crop, resulting in better crop coverage.

•    Dümmen Orange only uses crop protection agents that are approved by MPS; in many cases, these are stricter guidelines than required by the government.

•    Guidelines focusing on a risk-based approach of preventative sanitation have been established to achieve significant reductions in use of crop protection agents.

•    For a second consecutive year, the Dümmen Orange El Salvador team has obtained 100 per cent score for MPS-GAP and MPS-SQ.

•    Together with the Ministry of Education, Dümmen Orange El Salvador is facilitating a program through which workers can obtain a high school diploma. The first students will graduate in December of 2017, including 25 participants that average 28 years old.

•    Dümmen Orange has introduced a scholarship program for the children of its workers. Participants receive grants to buy school materials and necessary supplies.

•    Through financial support from the farm, many workers are completing a university study program in the evening to further their education.

•    Female workers at Las Mercedes receive 112 days of maternity leave (more than the legal minimum), and have the right to work one hour less per day with full pay for six months upon returning to work.

•    Health and well-being is promoted through establishment of an on-site, after-hours recreational club for workers, including creative activities, physical exercise and discussion of social issues.

Foundation MPS (More Profitable Sustainability) was launched in 1993 in the Netherlands with a focus on reducing the environmental impact of growing.

Since then, its activities have expanded to over 45 countries with more than 3,200 participants for the MPS-ABC Sustainability Certification. Also, certification on safety and social aspects were included. Detailed information on its certifying process and certificates is available at the MPS web site www.my-mps.com.

MPS-ABC is the company scorecard where growers are benchmarked on five themes; use of crop protection agents, fertilizers, energy, water, and recycling. The goal of MPS-ABC is continuous improvement in the production process on the five themes.

MPS-GAP relates to a variety of aspects in relation to production. For example, the correct use and application of crop protection agents and traceability during the total production and shipping process.

MPS-SQ (Socially Qualified) refers to safe and rewarding working conditions with a focus on general health, welfare of the labour force and identical treatment of men and women during production.

Dümmen Orange is a leading company in the breeding and development of cut flowers, bulbs, succulents, pot plants, bedding plants and perennials.

The company employs over 7,000 people worldwide. In addition to a large marketing and sales network, Dümmen Orange has a diversified network of specialized production sites.

The key to Dümmen Orange’s success is a broad and deep product range, supported by a global supply chain. The company embraces its social responsibilities and invests in the health, safety and personal development of its staff.