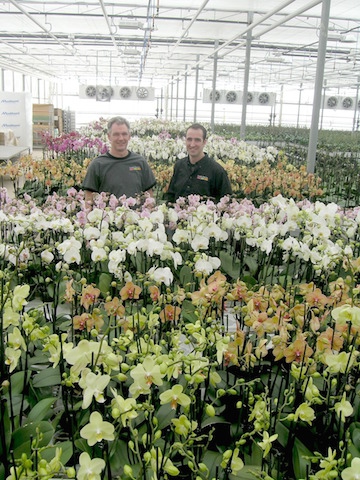 May 25, 2015, Beamsville, Ont. – Cosmic Plants, a leading potted orchid grower in North America, will be welcoming some very special guests on Thursday afternoon.
King Willem-Alexander and Queen Máxima of the Netherlands will visit the greenhouse during this week’s state visit to Canada.

This year, the Netherlands is commemorating the seventieth anniversary of its liberation and Canada’s contribution to that historic struggle will be a central theme of the state visit.

Of 34 million Canadians, more than a million have Dutch roots, forming one of the largest as well as best-integrated groups in the country.

CosMic Plants is owned by Neil and Mike van Steekelenburg (photo at left), a pair of brothers of Dutch descent. The King and Queen will also meet with delegates from the Dutch agricultural companies traveling with the trade mission. Also attending will be area horticultural entrepreneurs with Dutch roots who will share their experiences in Canada with the Royal Couple.

The schedule includes a variety of meetings and tours on Parliament Hill and Rideau Hall. Included will be a wreath-laying ceremony at the National War Memorial to commemorate the Canadian soldiers who lost their lives in the Second World War, along with a meeting with Canadian veterans who 70 years ago helped liberate the Netherlands.

After attending a CEO round table conference with representatives of Dutch and Canadian businesses, the Royal Couple will meet with Prime Minister Harper. This second visit to Parliament Hill will conclude with a meeting with the “Dutch Caucus,” a group of 20 Canadian Members of Parliament with ties to the Netherlands. Some of these MPs are of Dutch descent, while others take a specific political interest in the Netherlands.

In the evening a state banquet will be held at Rideau Hall.

As a token of gratitude for 70 years of freedom, the Ministries of Foreign Affairs and of Education, Culture and Science, Dutch and Dutch-Canadian companies, and Dutch educational institutions have established 70 scholarships for Canadian students who wish to study in the Netherlands. The first Canadian students will receive their scholarships in the presence of the Royal Couple.

The tour of CosMic Plants follows this meeting.

The Royal Couple will then return to Ottawa to attend the conclusion of the DiploHack #HackingConflict challenge. Teams of diplomats, students, journalists and IT specialists will have spent two days discussing how they can find, connect and amplify the voices of youth in conflict zones through the use of new technologies.

In the morning the Royal Couple will fly from Ottawa to Toronto. They will visit the Legislative Assembly of Ontario for courtesy calls. Included are meetings with Lieutenant Governor Elizabeth Dowdeswell and Premier Wynne.

The Royal Couple will then tour the nearby MaRS Discovery District, an important innovation hub in Canada. MaRS is a platform for start-up ventures and established companies and research laboratories in the fields of Life Sciences & Health, ICT and Energy.

In the afternoon, the King will give a speech at the “Canadian-Netherlands Resilient Cities Seminar.” During this seminar, Dutch companies and public authorities will discuss the challenges of urbanization and economic development for waterfront cities as well as possible solutions.

The program continues on Toronto Islands where the King and Queen will unveil one of seven Tulpi chairs that are a gift to the City of Toronto. The chairs have been placed looking out over the city’s waterfront and skyline.