A small-town greenhouse, passive and solar, owned by everybody, is tucked away beside the headwaters of the Columbia River in the East Kootenays. It was unique when built and scores high for creativity today.

With about 100 active members, the Groundswell network hosts workshops and hundreds of visitors, including busloads of school children.

Step aside commercial, university and hobby greenhouse operators, this is a story about a community’s greenhouse in southeastern British Columbia. It’s a humble, educational, technical achievement and easy to miss.

More than an insulated, thermal-heated, 2,400-square-foot curved-wall greenhouse, Groundswell is “a living classroom that teaches people of all ages how to grow crops regeneratively,” says the community website: groundswellnetwork.ca.

With about 100 active members, the network hosts workshops and hundreds of visitors, including busloads of school children. It is studied and emulated in other countries, though it is little-known in Canada.

Groundswell Community Passive Solar Greenhouse and Gardens, operated by the non-profit Groundswell Network Society, is in Invermere B.C., close to the Alberta border and about 300 km southwest of Calgary.

The site occupies one-and-a-quarter acres (about 5,000 sq. m.) adjacent to David Thompson Secondary School and College of the Rockies. It is on the inside of a switchback curve alongside 14th Street.

The greenhouse itself, about 40 ft. x 60 ft., is beside a hillside. Sunlight enters from a large curved-glass, south-facing wall. The north side holds a flat, insulated roof now surmounted by 15 large solar photovoltaic panels that generate electricity.

Inside, a solar-powered system sends hot water through an under-slab earth-heating system. As well, warm air at the top is collected and pushed nine feet below ground with a fan. From the edge of the roof, rainwater funnels into and through a water retention system.

The greenhouse became operational in 2009. Workers could start plants in February and be harvesting the last tomatoes in November.

In retrospect, it was built with foresight for conditions developing today.

Back in 2014, then executive director Bill Swan said, “Why greenhouses aren’t all like this is because we live in an era of very inexpensive energy. And what we have tried to demonstrate here is to anticipate the change in that reality that many in the food sector believe is coming.”

New leadership and an energized six-member volunteer board has gradually been introducing changes.

Groundswell more than tripled the output of the original solar system in 2021 by adding 15 larger solar panels. The increased electrical output supports a new pump and an electric water boiler, creating a combination of passive and active heating.

“Two years ago (2020) was the first year we were successful in growing marketable produce through the full 12 months of the year,” says volunteer director Deborah Griffith. “With the support of our new solar panel system and new electric water boiler, we kept temps in winter around 10C and kept growing through the coldest months.”

Passive energy from incoming sunlight and active energy from the ground below, regulated by an original Argus climate control system installed at the outset, kept the selected cool-season spices, herbs, and veggies comfortable.

Outside, in the valley between the Kootenay Mountains, the temperature was mostly below freezing for about 100 days.

The recent technology investment (about $20,000) produces enough electricity on an annual basis, Griffith says, to offset the new “active energy” heating bill for the greenhouse.

Twenty to 30 (or more) local organizations, donors and volunteers support the community-based programs. It offers raised-bed rental gardens, community events, market gardens, even soil research and production. It has become, in effect, a local educational institution for regenerative or permaculture management practices.

GREENHOUSE DESIGN
End-to-end, this original greenhouse was “unique,” says Griffith. “We get requests monthly from people who want to re-create what we’re doing. There isn’t one exactly like it anywhere. The concept was to extend the season by taking warm air from inside the greenhouse and pumping it underground.”

A huge pipe collects the warm air. A fan pushes the heat through smaller pipes that connect and go down eight or nine feet into the ground. Below the greenhouse, a series of tubes along the full length of the greenhouse release the heat underground. They warm the ground, creating a heat sink. The floor of the greenhouse is a cement slab over a layer of Styrofoam insulation. This helps retain the bank of stored energy. During winter, the energy slowly seeps up through another pipe and natural spaces that aren’t fully insulated.

The north side of the building has an insulated roof and a thermally massive concrete wall. It all retains heat, storing it for release overnight.

The greenhouse has raised wooden beds for production. Theses beds are about 3 ft. by 8-ft. long, on the ground, on legs or on wheels, and have automatic drip irrigation. The boxes use a metal netting underneath, supporting layers of weed control fabric, gravel, and soil. A composting program supplies the soil.

The original kitchen also had upgrades in 2021.

“A major upgrade in the kitchen allowed us to more easily access the area. We put in an island where we work with the harvest material, new counters, new donated cabinets, a stove, dishwasher, and a huge commercial fridge with sliding glass doors,” Griffith says. “You can have an herbal workshop here, sit around the island and talk. Plus, volunteers and staff have space to clean the produce after harvest, put it in bags and get it ready for sale.” 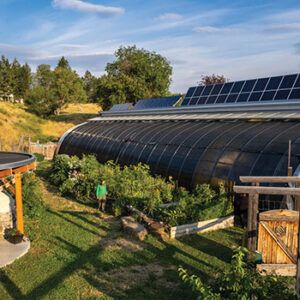 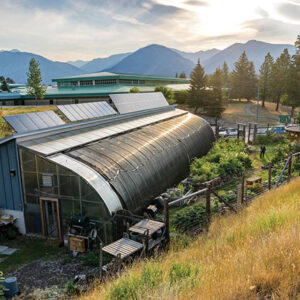 Background to Groundswell
Around 2006, according to Griffith, local chef and teacher Alison Bell approached the Columbia Valley Botanical Gardens organization to see if it could support building a greenhouse with an extended growing season and kitchen for students. A groundswell of community support developed. The school division made land available to develop gardens and greenspace as well as a greenhouse. The new passive, solar greenhouse was commissioned in 2009 as a pilot project.

Griffith introduced the Wild Voices for Kids program from the background while doing communications and education with Parks Canada. She came onto the board of directors in 2019.

Rob Avis, an environmental engineer in Calgary, became an interested advisor. Avis helped them with overall initial design concepts, using the principles of permaculture, to make the 12,000 square foot site an “ecological gem.”

Groundswell’s website describes permaculture as “a holistic approach to design allowing creation of a sustainable and regenerative system based on science yet guided by ethics.”

The design intended to address issues of climate change, energy, water and resource conservation, regional ecosystems and biodiversity conservation, food security, and the decline of agriculture in the region.

Conceptually, Groundswell now has a community garden space with 18 raised garden boxes, a community gathering space with a pond and wetlands, two perennial food forests of edible, medicinal and fibre-producing plants, and a market garden. It hosts events and educational programs throughout the year. Recently, directors opened a second location, Mount Nelson Community Gardens, with another 29 garden boxes for public rental.

Along with permaculture, water flow guided the design by Avis. It formed the foundation for placing the gardens, food forests and gathering space beside the greenhouse, Avis said in an early video. The concept, in part, was to fully supply the watering needs for the greenhouse and gardens without using very much potable water from Invermere.

A swale beside the greenhouse, for instance, directs water flow from major rain events safely along the slopes of the site, infiltrating the whole garden area and spilling into the pond. The pond has a constructed wetland to clean the water and overflow spillways draining into the food forests.

An eco-friendly rainwater gathering system now is on the north side of the greenhouse. On the other side, a south-facing area with a curved rock wall provides a thermal barrier and space for garden beds.

“We try to really demonstrate what a functioning greenhouse and market garden in your backyard could look like,” Griffith says. “Staff put in the market garden, then do the feeding and amending. Volunteers come twice a week in summer and fall to help us harvest. We sell most produce to a local market on the highway, and people buy directly from us. Some produce also goes to the local food bank.”

Recent programs
Popular new programs have been introduced at Groundswell in the recent past.

“Apple Rescue” sends staff and volunteers out to pick apples for area residents who can’t pick themselves.

“The reason is to keep bears from coming into town. We are in the Columbia Valley and surrounded by forest. Bears are everywhere, and there are tons of apple trees here, too,” Griffith says.

There are markets for the good apples collected; the rest become animal feed at local farms.

“Seniors’ Luncheon” is a second new program. Groundswell directors decided to try offering a senior’s luncheon late in 2019. They were surprised to see 35 people attend for the first event.

“We did that for the rest of the fall and would like to do it again,” Griffith says.

Last spring, three classes from another local school started a ‘growing’ program, using the community gardens and visiting the greenhouse both spring and fall.

On sunny, chilly days in the fall, the thriving greenhouse gets really warm. Even in winter, vents are opened at times. Old and young visitors love it. It’s common to hear, “It feels so much like spring in here!”