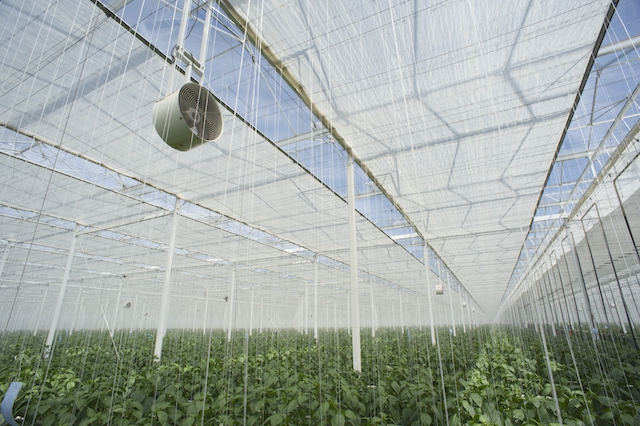 March 16, 2017, Simcoe, Ont. – With the Ontario government’s cap and trade program now in effect, many greenhouse growers in the province are quickly discovering the high cost of fighting climate change.
To some, that cost appears unsustainably high.

The cap and trade program – which was first announced in 2015, but only went into effect at the start of the new year – aims to reward companies who reduce their annual greenhouse gas emissions. For many small- and medium-sized growers in the province, however, the increased costs associated with the program feel unfairly punitive, leaving them at a competitive disadvantage.

“Growers are getting their January bills from their natural gas distributors, and in many cases those bills have doubled,” explains Dr. Justine Taylor, the science and government relations manager with Ontario Greenhouse Vegetable Growers (OGVG). “So they’re feeling a high level of frustration. They have concerns for the future direction of their businesses.”

While higher-volume consumers – facilities who generate more than 10,000 tonnes of greenhouse gas emissions annually – are eligible to receive allowances that largely offset the carbon costs associated with natural gas combustion for 2017, growers who fail to meet the 10,000-tonne threshold are forced to bear the full increased cost immediately without any government assistance.

However, larger facilities face a different set of challenges when navigating the obscure complexities of the cap and trade program and associated markets. There are significant bureaucratic efforts associated with participation and the uncertainty of the final cost impacts makes business planning for the future problematic.

As a result, many growers and family farms are beginning to question their future prospects in the province.

“People are concerned,” says Andrew Morse, executive director with Flowers Canada Growers. “They’re starting to do the math and assess how they will continue to do business moving forward. A lot of people are very concerned about what this means.”

Making matters worse, Morse believes that many growers have yet to see the whole picture when it comes to the increased cost of doing business.

“At this stage, most producers are looking only at the increase in costs associated with natural gas. Not as many have been able to factor in the additional increases in price for their other product inputs, whether it’s fertilizer or nutrients or other materials. Many other manufacturers in the province will also be tasked with this new price, and will often pass that additional cost down to the supply chain.”

The industry has already seen an increase in cardboard pricing as a result of cap and trade.

Morse estimates that the increase in costs associated with the production of natural gas alone will fall somewhere in the territory of $5000 and $7000 per acre of greenhouse production, with Taylor projecting an average cost of $6200 per acre.

Ontario was joined by Alberta in introducing a carbon pricing program for 2017. After an intense public lobbying effort, however, Alberta growers were able to secure government rebates of up to 80 per cent, which are similar to those offered in British Columbia, whose carbon tax program began in 2008.

Between the rebates being given to growers in Western provinces and the lack of carbon pricing in northeastern states like Michigan and Ohio – not to mention Ontario’s high electricity costs – many growers in Ontario are now worried they will be unable to remain competitive.

“You have to remember that we are what would be considered a trade-exposed industry,” says Morse.

“We have competitors – not just in other states, but in other provinces – who have freedoms or systems available that we don’t have access to. In effect, we are put at a disadvantage when competing with those jurisdictions, and there’s limited capacity to increase prices to offset additional costs of things like cap and trade, because consumers can just as easily choose a foreign product from a producer in the U.S., or Columbia, or Ecuador, or another province.”

The OGVG and Flowers Canada Growers continue talk with the provincial government about the possibility of some form of relief or assistance for the sector.

“We at OGVG have been working directly with the government for well over a year,” notes Taylor. “From a lobbying perspective, it’s probably been closer to two years – basically as soon as the program was announced.

THE NEED FOR A LEVEL PLAYING FIELD

“We have been making them aware that this is going to have a big impact on our sector, particularly on the small- to medium-sized growers, and have discussed several options in terms of how we could ensure a level playing field across our grower base.”

The grower groups have been working closely together with their lobbying efforts.

“Our association, through The Ontario Greenhouse Alliance, has worked very closely with government partners to discuss the challenges associated with Cap and Trade, and to look for realistic solutions,” adds Morse. “While we haven’t identified any specific programs or rebates in line with what we’ve seen in other jurisdictions, I think there is still a lot of room for growth, and we hope to continue to work with the province in finding those solutions.”

While hopeful, Morse knows that the clock is ticking, meaning provincial stakeholders must act quickly in order to ensure the future of growers in the province.

“Here in Ontario, it’s certainly in our interest to ensure that we find some solutions before farms start leaving, or else we really do change the face of this sector.”

Taylor Fredericks is a West Coast correspondent for Greenhouse Canada.