News
Canadians are getting ‘The Real Dirt on Farming’ 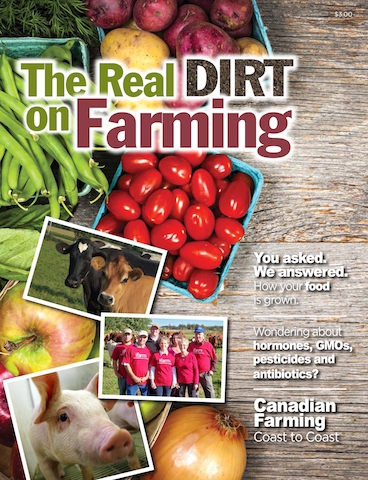 Jan. 21, 2016, Guelph, Ont. – One million copies of The Real Dirt on Farming booklet have now been distributed to Canadians from coast to coast. The milestone was reached just 15 months after the booklet’s publication.

The Real Dirt on Farming, available in English and French, is a national initiative led by Farm & Food Care Canada and its provincial associations in Ontario and Saskatchewan as part of its mandate to cultivate appreciation for food and farming by connecting farm gates to our dinner plates.

This award-winning 52-page booklet is written to answer Canadians’ questions about food and farming, tackling topics like pesticides, antibiotics, hormones and GMOs head on.

It provides answers to common questions such as the differences between conventional and organic products, pesticide use, animal welfare and animal housing, environmental sustainability, technology and many other subjects that consumers indicated were important to them in a poll done by Farm & Food Care. The goal of the booklet is to help readers make informed decisions about their food purchases.

When the booklet was first released in November 2014, the distribution goal was for one million copies over four years. With help from funding and distribution partners from coast to coast, that goal was reached this week.

“We’ve come a long way from the first edition of the booklet in 2006 where we distributed about 15,000 copies,” notes Bruce Christie, chair of Farm & Food Care Canada.

“We’ve been so appreciative of the support from agri-food businesses, farm organizations and individuals that have come forward to pledge funds and distribution assistance for this project. There’s a real need for accurate information about modern food and farming practices and this publication does just that.”

Kelly Daynard manages the project on behalf of Farm & Food Care. She’s pleased to see the country’s entire food and agricultural community rally behind this initiative. “We’ve seen everything from farmers who have hand-delivered copies to the waiting room of their doctors’ offices and lawyers to dietitians using them in their work to businesses that have ordered thousands of copies for their staff and customers.”

She added that the examples also include an Ontario Junior Farmer club that purchased 5,000 copies to hand out at events in its region, Farm & Food Care Saskatchewan that inserted 350,000 copies of the digest version into shopping bags in Co-op grocery stores, and the P.E.I. Federation of Agriculture that inserted 20,000 copies in the Charlottetown Guardian.

Since the release, copies have also been mailed to politicians across Canada, dietitians, schools, professional home economists, media, grocery store and butcher shop owners and other target audiences. The digest was also inserted in the Globe and Mail in March of 2015 and will be distributed to National Post readers in the spring of 2016, with plans for similar insertions in other business leader publications.

Farm & Food Care Canada is now working towards distribution of the next million copies. Anyone with an interest in food and farming should take a look and are encouraged to identify people who should have a copy of this book and ensure they get one.

To see The Real Dirt on Farming and order copies go to www.RealDirtonFarming.ca.

Farm & Food Care Canada is a coalition of farmers, associations and businesses proactively working together with a commitment to provide credible information and strengthen sustainable food and farming for the future.